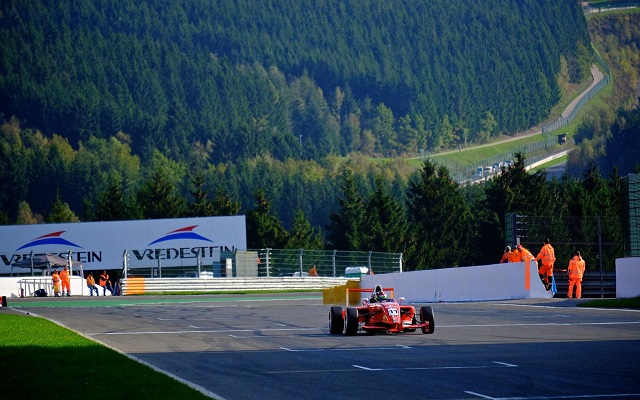 Australian driver Anton de Pasquale put himself in a position to secure the Formula Renault 1.6 NEC title with two races to spare by taking a dominant win in race one of the penultimate round at Spa.

The Lechner driver lined up third on the grid, but made a strong start and was into the lead in the opening lap. He then began to pull away at an incredible rate, being especially quick in the twisty second sector, and managed to win the race by over nine seconds.

Behind him, there were fights up and down the field. Ralf Aron, who had started fifth, made his way past?Dutchman Janneau Esmeijer at the start. He was subsequently promoted to third after an off for Paul Sieljes, and then passed Florian Janits for second on lap seven.

Janits settled for third, while Hungarian driver Ferdinand Habsburg passed Esmeijer and Max Defourny to finish in fourth, while Esmeijer kept his slim championship hopes alive by finishing in fifth.

Defourny?came on top of a last-lap battle with Nico Otto to take sixth, the pair finishing just ahead of Oliver Soderstrom in eighth. Boris Kolff and Cedric Piro rounded off the top ten.

With three races remaining, De Pasquale leads the championship by 67 points ahead of Esmeijer, with a maximum of 90 left to be awarded.