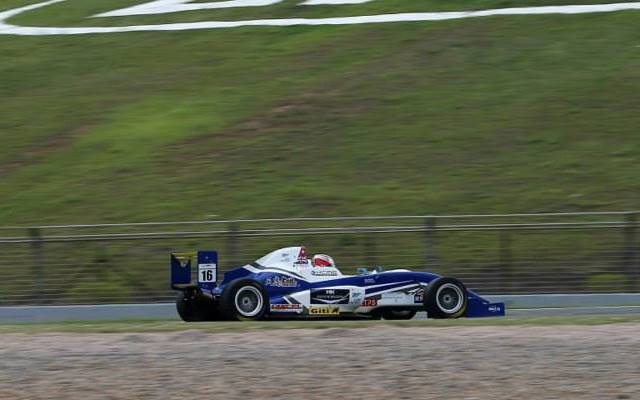 KCMG driver Dan Wells claimed his first win of the Formula Masters China season in race four of the fifth round at Zhuhai.

In a race held to compensate for the rained-off encounter in the earlier visit to the same circuit in May, Wells passed teammate James Munro around the outside of turn four on lap one, and then held off the advances off the Eurasia duo of Yuan Bo and Matthew Solomon to take his first victory in the series in over two years.

Munro ran off the track early on and could only manage seventh at the end, reducing his championship lead over Solomon to just six points. The Hong Kong-based driver put pressure on Wells for the lead in the first part of the race, but his pace faded and he lost second to his Chinese teammate Bo on lap 10.

Meritus’s Andersen Martono finished in fourth place ahead of the Humpuss Racing car of Senna Iriawan, the top five finishing within 3.5 seconds of each other. Martono’s teammate Jake Parsons, starting?near the back?as he had not joined the series in May when the grid had been decided, managed to move up to sixth at the end, just ahead of Munro.

The season finale will take place at the Shanghai International Circuit in four weeks’ time.