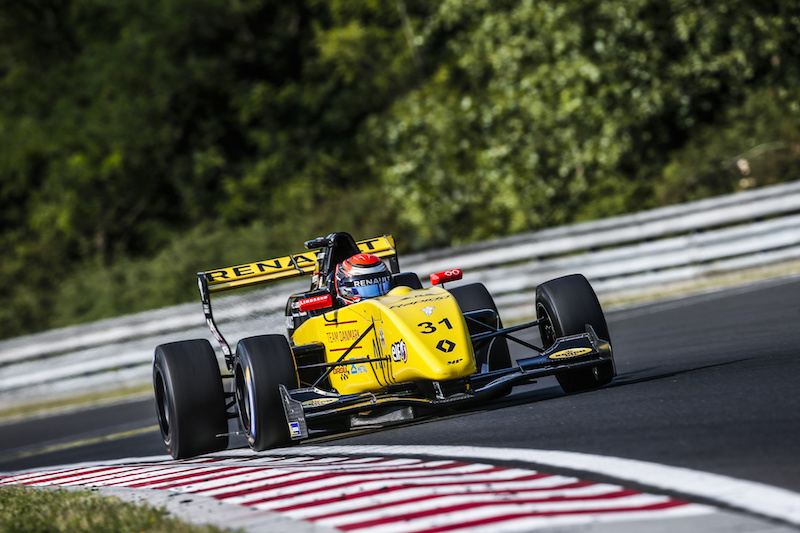 Christian Lundgaard reclaimed the Formula Renault Eurocup championship lead with his third victory of the season at the Hungaroring.

Lundgaard made a strong getaway from pole in damp conditions and was untroubled for the remainder of the race.

He?d managed to build a comfortable gap to second placed Max Fewtrell when, four minutes before the chequered flag, the safety car was brought out to clear Thomas Neubauer?s stranded car.

The incident put Fewtrell and Lorenzo Colombo in third within touching distance of the race victory, but the clock ticked down to zero before the track was cleared and Lundgaard remained unchallenged.

Behind him, title rival Yefei Ye struggled on the opening lap. After a difficult qualifying, Ye dropped from 10th?on the grid to 13th?on lap one. He managed to pick up a handful of positions as the race wore on, but was still outside the points when the safety car came out.

The main battle in the closing stages of the race was the four-way fight for the final podium position.

After jumping from ninth on the grid to third, Alex Peroni was forced to put up a strong defence from Logan Sargeant. Oscar Piastri and Colombo soon joined the fight, which was allowing Lundgaard and Fewtrell to escape up the road.

Colombo ran wide around the outside of Sargeant to take fourth and was immediately on Peroni?s tail. The pair ran side by side but Peroni couldn?t keep the JD Motorsport driver behind him. Another move around the outside promoted Colombo into third, where he would finish to take his fourth podium of the season.

Piastri managed to pass Peroni just before the safety car was brought out to take fourth, while a spin for Sargeant dropped the American racer back to seventh. Peroni finished fifth, ahead of Alexander Smolyar.