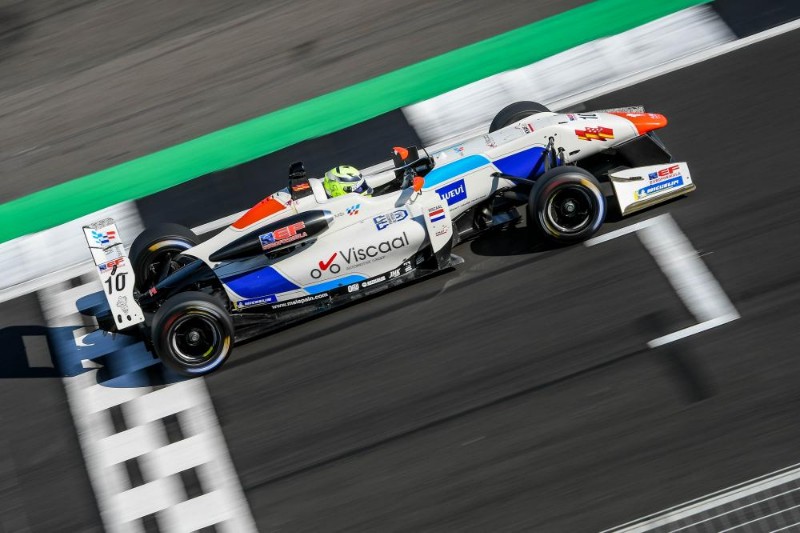 Bent Viscaal ended Felipe Drugovich’s wining run in the Euroformula Open championship with victory in the second race at Silverstone.

The Dutch driver beat championship leader Drugovich to pole by 0.002 seconds, and after holding off the RP Motorsport driver at the first corner kept just out of reach for the rest of the race, assisted by a superior run through the first sector.

Being in the wake of Teo Martin Motorsport driver Viscaal didn’t help Drugovich, and although he occasionally cut down the lead gap, it never seriously looked like he was going to challenge for an eighth consecutive win.

On the plus side, second place is his joint worst result of the season, and he still holds a championship lead of 93 points.

Carlin driver Cameron Das took his third podium of the season in third, initially hounding the top two before concentrating on the attacking presence of Campos Racing’s Marcos Siebert behind him.

The pair got alongside each other at times, but a mistake through Luffield by Siebert meant the end to the race was slightly easier for Das, and he took the position by just over a second.

Das’s team-mate Matheus Iorio finished fifth thanks to a strong start off the line, just ahead of Drivex School’s Lukas Dunner and Campos’s Yves Baltas.

Calan Williams qualified fifth for Fortec Motorsports but had a messy first few laps and ended up in eighth. Alex Karkosik and Guilherme Samaia completed the points.