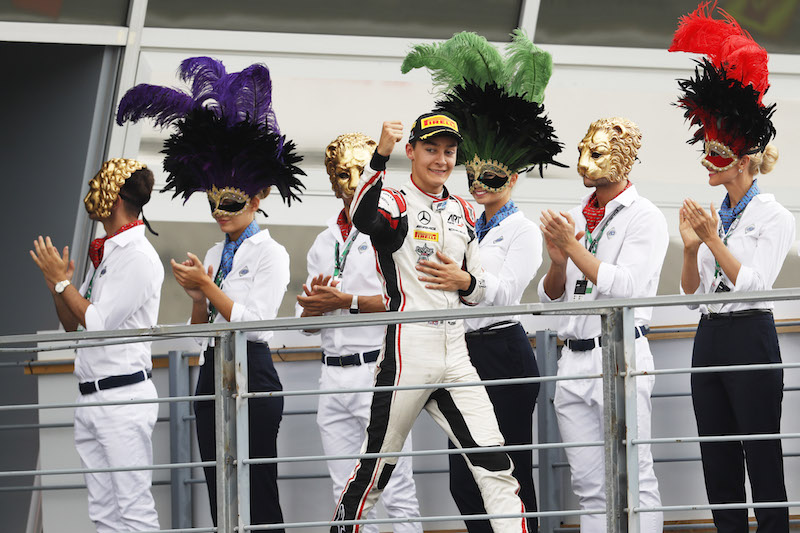 George Russell capitalised on a mistake from Artem Markelov to win the Monza Formula 2 sprint race and increase his championship lead.

Russell leapt to the front of the field at the start together with fellow third-row starter Nicholas Latifi, who took the lead on the inside of the first chicane.

ART Grand Prix driver Russell got ahead of Latifi into the same corner on lap five but he ran too deep and missed Turn 2, not only allowing Latifi back past but also enabling Markelov to pass him through Curva Grande.

Markelov took the lead away from Latifi on the following lap and was able to build a gap while Russell looked for a way past the DAMS driver.

Russell took second on lap nine of 21 and was into the lead just two laps later after Markelov locked up at Turn 1 and had to take to the escape road, giving Russell a run through Curva Grande.

Markelov was able to put Russell under pressure for a few laps, but the Mercedes junior pulled away for his fifth win of the season.

Russian Time driver Markelov, whose engineer spoke over the radio of an engine issue limiting his performance, came under attack from Sergio Sette Camara, who spurned a front-row start and slipped to fifth place through the opening turns.

Sette Camara, who put his issue before the start of the feature down to a misunderstanding on his part, made a final bid to try and snatch second heading onto the final lap but locked up and ran straight on at the first chicane.

Latifi held on to fourth place under pressure from Lando Norris, who fell from fourth to eighth on the first lap.

Norris now has a deficit of 22 points to Russell with two rounds remaining, having closed to within five points at Spa one week ago.

Alex Albon was defending fifth from Norris in the middle of the race when he developed a gearbox problem that caused him to slowly fall through the field before eventually pitting. It leaves him 43 points adrift of Russell in the title race.

Boccolacci’s second weekend in F2 had been hampered so far by mechanical issues in qualifying and the feature race and he started in 18th, one place behind Aitken, who had suffered a damaged wheel rim and resultant puncture on Saturday.

Ralph Boschung, team-mate to Boccolacci at MP Motorsport, made a poor start from his inherited reversed-grid pole position and then collided with Sean Gelael over eighth on lap three, with Gelael furious that the Swiss driver had moved over on him under braking for the second chicane.

Shock feature race winner Tadasuke Makino got ahead of Norris on the first lap but pitted early on and finished 14th.