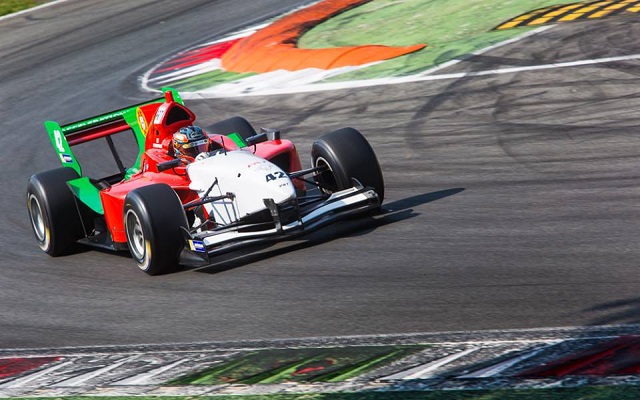 Having narrowly missed out on pole position in Friday qualifying for race one, Sergio Campana finally secured his maiden FA1 pole in the second qualifying session at Monza.

Friday pacesetter Felix Rosenqvist appeared set to replicate yesterday’s performance when he put in an early banker lap that kept him at the top of the standings for 20 minutes. However, as the Swede would later admit, that proved to be the wrong strategy, as his rivals concentrated on the final minutes and gradually overtook Rosenqvist.

First it was Mirko Bortolotti who picked up provisional pole, taking 0.007s out of the Swede’s time. However, just a minute later, Campana went on to post the session’s ultimate benchmark, four tenths clear of the previous best lap.

In the remaining time, Nigel Melker joined Campana on the front row, demoting Bortolotti and Rosenqvist to third and fourth respectively.

Sebastian Balthasar took fifth, with Richard Gonda a further tenth down in sixth. Lazarus duo Dennis Lind and Steijn Schothorst were a second down on the polesitter in seventh and eighth.

Marco Barba and Alessio Picariello rounded out the top ten, the latter reporting a broken diffuser that hampered his session.