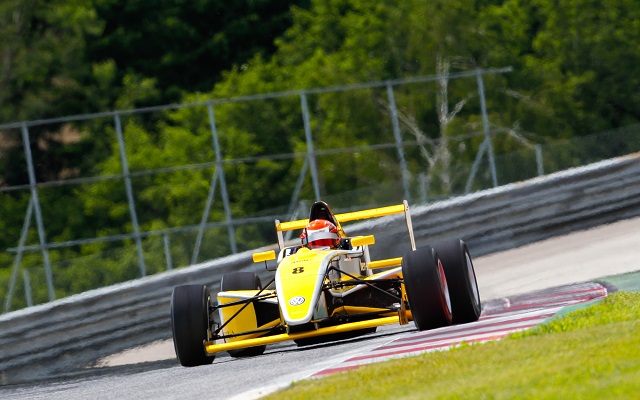 ADAC Formel Masters points leader Mikkel Jensen extended his advantage in the standings with a comfortable lights-to-flag win in race one at Spielberg.

Jensen made the most out of a perfect start to establish a safe early lead and went on to control the entire race.

His teammate Tim Zimmermann had a somewhat sluggish getaway from the front row but managed to move over and block Ralph Boschung behind him. While him and his pursuers got safely through turn one, there was a four-wide situation on the following straight which resulted in Zimmermann locking up and going straight into the gravel.

Amidst early chaos, the low-starting Mucke drivers failed to make up many places, while Joel Eriksson managed to sneak into third behind teammate Boschung.

The duo managed to keep up with Jensen as Boschung remained within two seconds of the Dane for the entire race. However, neither him nor his teammate got close enough to challenge the car ahead at any point and, as such, the top three ran in formation until the checkered flag.

A full ten seconds behind Eriksson, who bagged the first podium of his Formel Masters career, was Fabian Schiller, who had a lonely race and picked up solid points in fourth.

The rest of the field saw much more activity as, behind Schiller, four Mucke drivers were fighting it out for fifth. Kim-Luis Schramm held that place for much of the race, but was soon reeled in by Marvin Dienst and Maximilian Gunther. The latter two fought for position behind Schramm, with Gunther prevailing shortly thereafter. The 2013 runner-up then looked for a way to get past Schramm, but his teammate blocked him extensively, allowing both Dienst and Philip Hamprecht to keep up.

At one point, the four orange cars went into a corner in diamond formation and, while Gunther and Dienst got through, Hamprecht ended up tagging Schramm. Both surprisingly escaped without significant suspension damage, but ended up allowing Schiller Motorsport’s Nico Menzel into seventh.

It was Gunther, then, who finished fifth, ahead of another title challenger Dienst. Hamprecht briefly passed off-track Menzel in the final minutes of the race, but then gave it back, finishing eighth. Schramm took ninth, while Igor Walilko fended off Luis-Enrique Breuer to secure tenth.