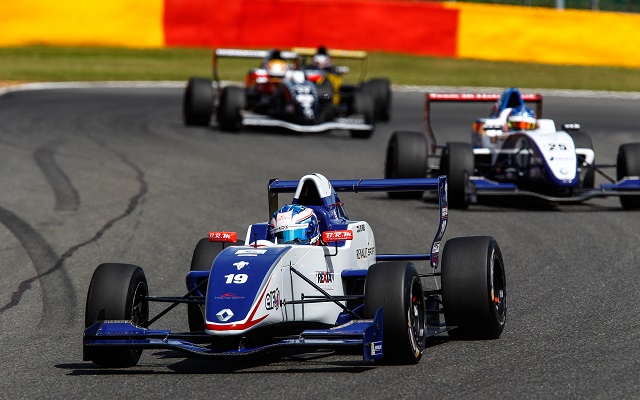 Having been denied victory despite starting from pole in two Eurocup races at Spa last weekend, Nyck de Vries broke the pattern by winning the first race of the Alps round at the Belgian track.

The Koiranen driver got a superb getaway off the line and managed to keep the opposition at bay throughout the Kemmel straight and into Les Combes.

Despite serious pressure from fellow front row starter Matevos Isaakyan, de Vries maintained the lead on lap two when the first safety car of the race came out due to an incident involving Dario Capitanio and Raoul Owens.

The safety car would come into the pits during that very same lap and, while both de Vries and Isaakyan kept position, Charles Leclerc managed to overtake Simon Gachet for third. Over the next few laps, de Vries maintained the gap to Isaakyan, who in turn pulled clear of the opposition.

Another safety car period was triggered on lap seven, seemingly caused by an incident involving Pietro Fittipaldi, who was having a superb debut race up to that point. The stoppage ended up leaving little time for green flag racing and, when the race went back to green, it was for one final lap.

This time around, the Dutchman didn’t have a particularly good restart, but managed to keep Isaakyan at bay through the first sector, which proved essential in securing him his fifth win of the Alps season. The Russian picked up his fourth podium in five races, while Leclerc rounded out the top three.

UPDATE; Stefan Riener was among those penalized post-race, with his 25-second penalty promoting Marek Bockmann into tenth.