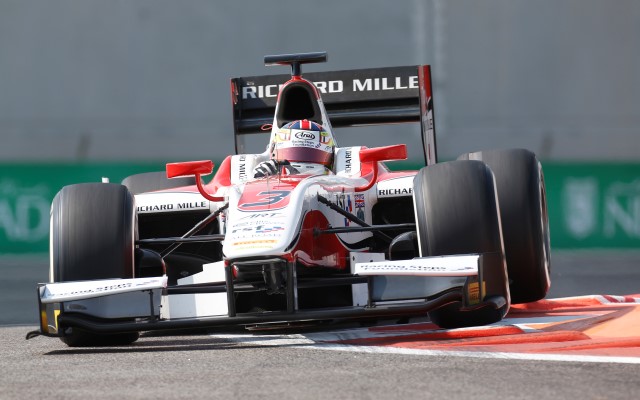 James Calado used a rocket start to claim victory in what will probably be his final GP2 Series race in race two in Abu Dhabi.

Starting third, Calado pierced his way past front-row starters Johnny Cecotto and Felipe Nasr to lead into the first corner. He was then gifted a comfortable advantage when Cecotto and Nasr collided at turn one, Nasr later receiving a drive-through penalty as a result.

Dani Clos took up second place ahead of champion Fabio Leimer, but was able to keep pace with Calado for much of the race. A late safety car brought him close but he settled for second as he finished his five-round return with MP Motorsport with a podium.

Leimer maintained the consistent form that won him the title in third. His rival Sam Bird came through to fourth from ninth on the grid to give Russian Time the teams’ title at their first attempt. Carlin led the standings at the start of the race but neither Nasr nor Jolyon Palmer would score points, the latter retiring out of tenth with a puncture.

Calado’s ART team-mate Daniel Abt finished his difficult rookie season with his best result to-date of fifth. Marcus Ericsson was sixth ahead of Simon Trummer and Sergio Canamasas with the top ten completed by Stefano Coletti and Julian Leal.