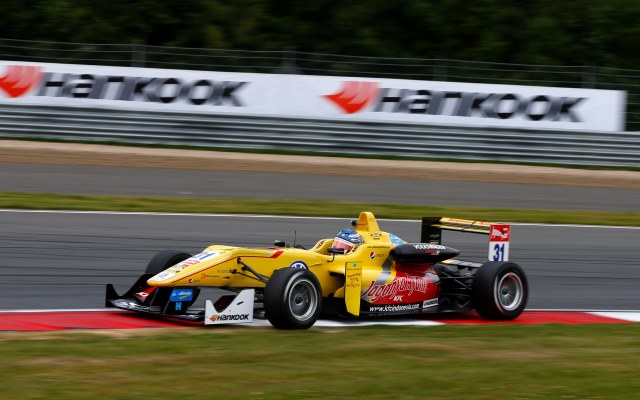 Tom Blomqvist led a one-two finish for the Jagonya Ayam with Carlin team in the opening FIA F3 European Championship race at Spielberg after rivals Esteban Ocon and Max Verstappen made contact fighting for the lead at the first corner.

Verstappen got a slightly better launch than pole-sitter Ocon, but the Frenchman still headed into the braking zone ahead. But as Ocon moved to the left to take the racing line around turn one, Verstappen dived for the inside.

It appeared that Ocon did not leave enough space for the two of them, and contact was made that fired Ocon off into the runoff area. Verstappen fell to sixth, and second row starters Blomqvist and team-mate Antonio Giovinazzi headed off up front.

At one stage, Giovinazzi got close enough to Blomqvist to launch an attack but the Briton stayed ahead and opened up a margin that was extended to four seconds in the last few laps.

Verstappen came back to third, passing Felix Rosenqvist and Jake Dennis after contact was made in their scrap for the final podium place. Dennis eventually got past the Swede to clinch fourth.

Rosenqvist held onto fifth ahead of Antonio Fuoco. Nicholas Latifi spun out of seventh in the middle of the race, promoting Gustavo Menezes and Jordan King. King was able to claim seventh around the outside of turn five when Menezes attacked Fuoco but was run wide, but Menezes fought back and retook the position before the end.

King then fell to ninth on the last lap behind Dennis van de Laar, while home favourite Lucas Auer completed the top ten after a five-place grid penalty carried over from Moscow for contact with King left him starting 13th.

After dropping to the back of the pack, Ocon recovered as far as 13th place.