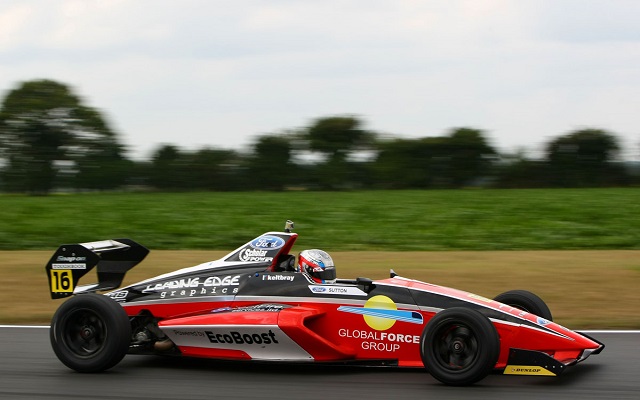 JTR’s Jayde Kruger and MBM Motorsport’s Ashley Sutton have secured poles for races one and three respectively of the UK Formula Ford round at Snetterton.

Sutton, who previously set the pace in Friday testing, moved into the lead with seven minutes remaining in the qualifying session and appeared set to secure a comfortable double pole.

However, a last-second surge from championship contender Kruger first saw him depose points leader Harrison Scott for second and then move into first with a spectacular lap under the checkered flag.

Seemingly caught out by the late lap from his South African rival, Sutton could not respond and had to settle for second on the race one grid – however, he managed to beat Kruger to pole for race three.

Scott qualified third for both races and will be joined on row two by JTR’s Max Marshall. Row three for races one and three will consist of Ricky Collard and series debutant Michael O’Brien.

Radical Motorsport driver James Abbott was seventh quickest overall, narrowly ahead of Louise Richardson and teammate Juan Angel Rosso, who has edged ahead of the former two on the race three grid.

Chris Mealin and Greg Holloway will round out the field on both occasions, while Meridian, who were set to field Connor Mills, Connor Jupp and Jai Nijjar, have pulled out of the weekend entirely due to mechanical issues.