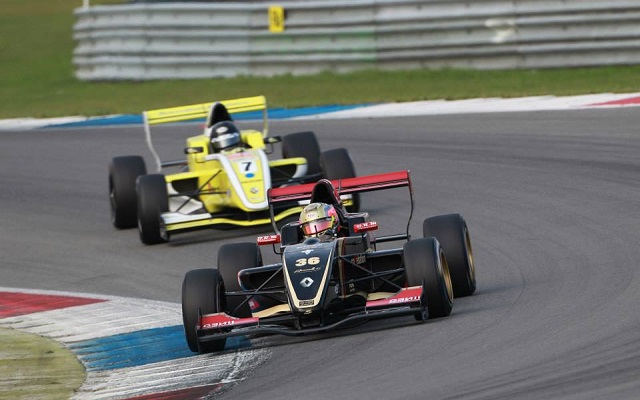 O’Keeffe’s session one benchmark came with five minutes and netted the South African his first pole in Formula Renault racing.

Championship frontrunner Louis Deletraz was a close second, while another contender Ben Barnicoat posted the third-quickest lap but will only start eighth due to a five-place grid penalty for overtaking under yellows.

His teammate Morris inherited third, with Gustav Malja promoted to row two alongside him.

Alex Albon and Ryan Tveter will start on row three – with Tveter inheriting sixth due to a three-place penalty for practice pacesetter Matthew Graham.

Morris was the only driver to go below 1:36s in qualifying, doing so in the second session, with his benchmark lap almost immediately followed by a red flag.

Although the session was restarted afterwards, the improvements were few and far between, which allowed Morris to comfortably keep pole.

His teammate Barnicoat will join him on front row, with Deletraz and Sasahara on row two.

Stefan Riener will line up in fifth, ahead of Malja, O’Keeffe and Tveter.

Albon and Graham make up the rest of the top ten.

Points leader Steijn Schothorst had a tough time in qualifying – he was 13th in session one but will start 16th due to a penalty, while session two saw him take 11th.