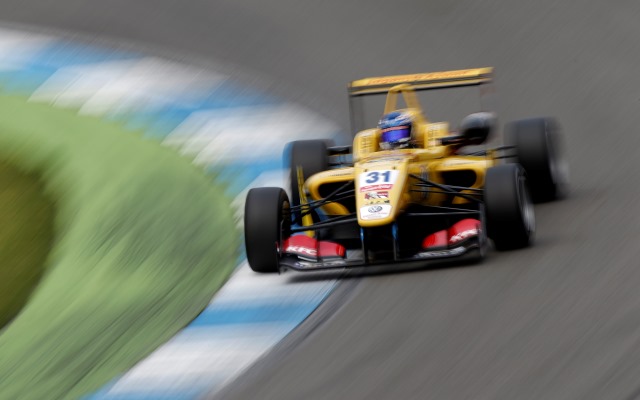 Tom Blomqvist secured pole position for races two and three of the FIA F3 European Championship at Hockenheim as he topped second qualifying by a commanding margin.

After times changed frequently during the middle of the session, Blomqvist took charge. After narrowly claiming top spot, the British driver then moved 0.359 seconds clear of the rest with a later effort. That was enough to secure pole not only for race two but also for race three, based on second-fastest times.

Despite Blomqvist’s advantage, the rest of the top ten was covered by exactly three tenths of a second in an otherwise closely-fought session.

After crashing out on the opening lap of race one, Max Verstappen claimed his first front row start in the championship. Esteban Ocon – whose points lead was cut to just five over Blomqvist earlier when he slowed on the last lap and dropped to ninth – was third fastest ahead of Antonio Giovinazzi and Ed Jones.

For race two, Verstappen and Ocon will again follow Blomqvist ahead of Giovinazzi, Roseqnvist and Fuoco. Jones will line up seventh ahead of Auer, Dennis van de Laar and Jake Dennis.