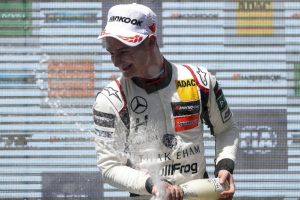 Hingeley drives Hitech’s third car in European F3, and is currently 17th in the points with a best finish of fourth in the opening round of the season in Pau. He will take over the third Asian F3 car from Jake Hughes, who drove it to a triple victory in the Sepang season opener.

“It will be my first time over in China, but I?m looking forward to the challenge to learn the car and track quickly and keep up the great start that the team had in the first round of the championship.?

Hughes will be racing for ART Grand Prix in GP3 at Monza this weekend, in which he is 10th in the points with one win, and there are currently no plans for him to return to Asian F3 before the season’s end.

Directly behind Hughes in the Asian F3 standings is team-mates Raoul Hyman and Charles Leong, who are set to contest the full season. Hughes’s car will be shared between various drivers with primary programmes in Europe, potentially including Hitech’s other European F3 drivers Enaam Ahmed and Alex Palou.

“Raoul wanted to do Asian F3 because he wasn?t sure where Europe was going in terms of his career, and the new F3 and what to do it,” Oakes told Formula Scout.

“In GP3 he didn?t have a seat in one of the two top teams because they were full, so he thought: what do I do for a year?

“Charles obviously is doing very well out there. I don?t know if he?ll do another season or come to Europe full-time. That?s been quite good. The idea with the third car is to utilise a bit of Europe and a bit of Asia, and that?s kind of cool for us because it keeps a part of the company out there.”

An 11th team will join the grid from the next round onwards with Chinese driver Liu Zexuan.

Zexuan finished third in Class B of the Asian Formula Renault championship in 2017, and stepped up to Class A this year. He also has experience in Formula Masters China, Asian F3 promoter Top Speed’s previous series, Chinese Formula 4, and in GT racing in his home country.