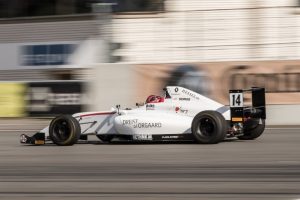 Casper Tobias Hansen remained at the top of the Danish Formula 4 standings at Jyllandsringen, despite only managing two thirds across the Danish Grand Prix weekend.

Hansen recently lost his mother and the loss is self-admittedly still having an effect, including having to take time out of training. Two podiums put a smile on the Team FSP driver’s face though.

The spoils on the championship’s second trip to Jyllandsring were shared between three different drivers and the chief beneficiary of this was Hansen’s team-mate Aske Nygaard Bramming, who rose from fourth to second in the standings.

It was a Formula 5 driver who took victory in the first race, with Mads Hoe triumphing by over four seconds to take his second win in three races. Mikkel Grundtvig won the F4 classification in second for Apex Racing, just ahead of Bramming. Another F5 interloper on the podium in Martin Harritz assisted his FSP team-mates, with Malthe Jakobsen and Hansen taking the points for third and fourth.

Casper Pilgaard was the man to beat in the second race, repeating his round two victory. The Pilgaard Motorsport driver has had a difficult season, missing two races because of car damage, but was the top driver on the championship’s trip to Rudskogen Motorpark in Norway, took pole for the opening Jyllandsring race and is now fourth in the standings, within touching distance of the runner-up spot.

Valdemar Eriksen was his closest rival on the road in race two, with Hansen, Bramming and Jakobsen filling a close top five. Harritz won the F5 class in seventh by just half a second from Hoe, with the racing being so close that Grundtvig actually finished between the two.

Pilgaard was denied another victory in the final race by Bramming, who also took fastest lap. Bramming’s FSP team-mates Hansen and Jakobsen were third and fourth, with Grundtvig fifth.

Hansen’s championship lead now sits at 72 points over Bramming, with Grundtvig, Pilgaard and Jonas Lindhard Nielsen, who was previously second and had a shocking weekend at Jyllandsringen, covered by a further 15 points.

Hoe beat Harritz to F5 victory in the final race. Line Sonderskov finished third to them in race one, with Lucas Daugaard doing the same in the other two. Niels-Ejnar Ritter made his championship debut, taking two fourths in class.

Jesse Salmenautio became the first driver in Formula Academy Finland to win both races at Kemora, and added two poles and two fastest laps at the same time too. The Kart In Club Driving Academy driver is currently a winless fifth in F4 North European Zone, but with team-mate Konsta Lappalainen not present in Finland he had one less rival to worry about.

It was still two NEZ drivers who took the challenge to Salmenautio, with SMP Racing’s Pavel Bulantsev and Koiranen-ran Tuomas Haapalainen finishing second in the two races. Neither got close though, and fourth for Haapalainen in the opener means his championship lead over Salmenautio is now down to 10 points.

Bulantsev finished third in the second race, with team-mate Ivan Shvetsov doing the same in the first. Michael Belov, the third of the SMP drivers, could only manage a sixth and a fourth, dropping him to third in the standings, although comfortably ahead of Ivan Berets, another SMP driver, who was fifth in both races.