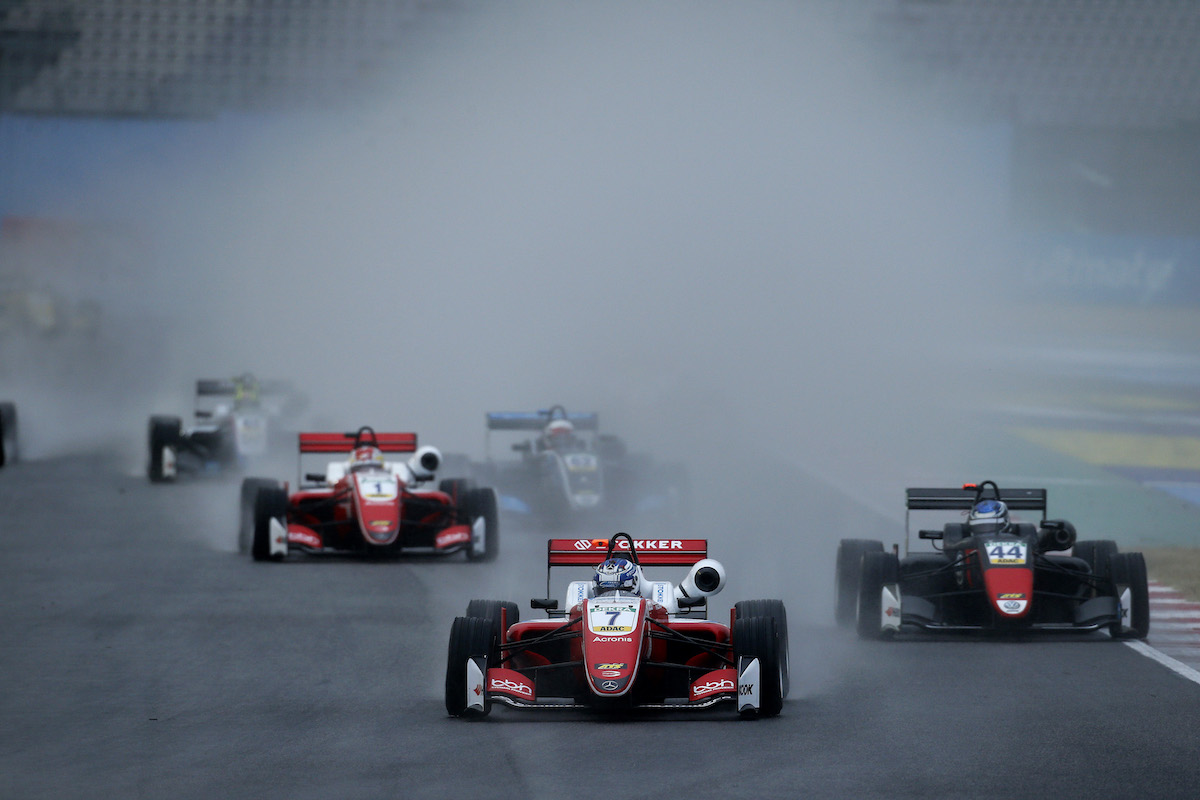 Prema’s Ralf Aron won the third and final race of the Formula 3 European Championship round at Misano under wet conditions that forced the race to be briefly red-flagged.

His team-mate Marcus Armstrong led the pack behind the safety car before the race was red flagged due to the weather conditions.

When the green flag fell after the race restarted again under the safety car, Juri Vips tried to make a move on Aron going into the first turn but wasn’t able to make it stick.

With 12 minutes left to go in the race, Aron took the lead away from Armstrong just before the safety car was deployed again to gather the cars of Sebastian Fernandez and Marino Sato.

With four minutes on the clock when the race got underway again, Aron was able to create a gap to the cars behind him to take his fourth European F3 win of the 2018 season.

The victory was made easier by an intense battle between Vips and Ferdinand Habsburg with four minutes ago. The two drivers traded positions on the wet track, however Vips was able to get the better of Habsburg to finish in second.

Habsburg proceeded to be caught by championship leader Dan Ticktum during the final few laps of the race but the Carlin driver was able to keep hold of the final podium position.

Armstrong was immediately passed by Vips and Habsburg at the final restart and then hit by his team-mate Guan Yu Zhou with the contact taking both Ferrari juniors out of the race.

It means Armstrong is now 32 points behind Ticktum, whose advantage over Vips has been trimmed to 12 points.

Race one winner Mick Schumacher ended his race in fifth position, his lowest result of the weekend having also finished on the podium in race two. He is just four points behind Armstrong and 2.5 ahead of Aron.

Hitech’s Alex Palou was able to make his way from 10th place on the grid to finish sixth, while Robert Shwartzman?behind him started the race outside of the top 10.

Fabio Scherer, Jehan Daruvala and Enaam Ahmed completed the top 10 in eighth, ninth and 10th respectively. Ahmed was battling in sixth place when with around 14 minutes to go he slowed briefly and fell down the order.