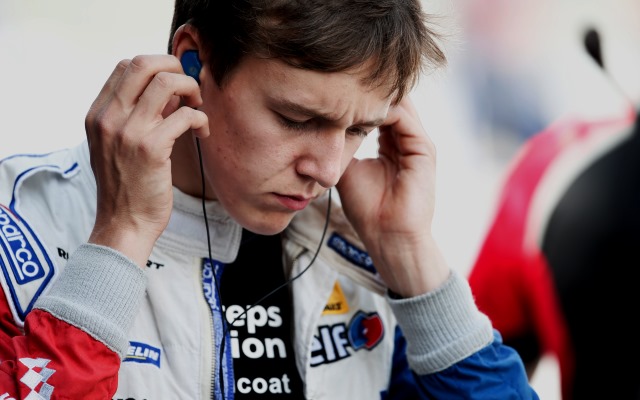 Ben Barnicoat ended a marathon two-hour qualifying session for the final race of the Eurocup Formula Renault 2.0 season at Jerez by claiming pole, while championship leader Jack Aitken will start towards the rear.

The dreadful weather conditions seen on Saturday continued, with the first of the two qualifying groups having their laps in very wet and gloomy conditions.

The second group was red-flagged early on, mostly to recover the stopped car of Darius Oskoui but also because the rain had intensified.

Nearly an hour had passed before the session was restarted, and despite the rain having stopped and the track appearing to be much drier, a number of cars skated off on their first laps.

One of these was Aitken, who was left stranded in a gravel trap and forced to end his session without setting a proper laptime. The Briton has a 13-point advantage in the standings after his two wins on Saturday.

A wait of another half and hour followed as track workers attempted to clear standing water.

Another red flag brought qualifying to an end inside the final minute of running after Max Defourny stopped.

Barnicoat claimed pole, his time of 1m54.432s beating the benchmark set early in the first group’s running by Anthoine Hubert.

Aitken’s off created an opportunity for Louis Deletraz to steal the championship advantage.

As he’s 21 points adrift though, the Swiss driver must win the race to overhaul Aitken and he will have to do so from third on the grid after falling nine tenths short of Barnicoat.

The other title contender Kevin Jorg could only muster sixth in the first group, leaving him 12th on the grid and with an uphill struggle to score the podium finish he requires to beat Aitken to the title.

Behind Deletraz in the second group came Simon Gachet, Defourny and Ukyo Sasahara.

Ignazio D’Agosto was second in the opening group and will start fourth after his two Saturday podiums.

Behind him were James Allen, Jake Hughes and Dennis Olsen, who outpaced Jorg by a mere six thousandths of a second.