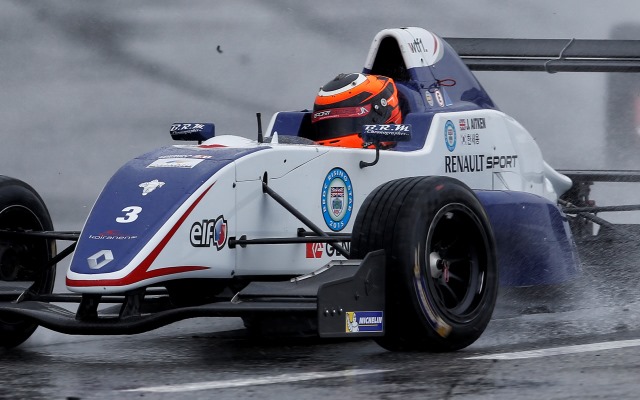 Jack Aitken won again in another weather-interrupted Eurocup Formula Renault 2.0 race at Jerez to build himself a 13-point lead to take into Sunday’s deciding race.

As had been the case in race one, the race began behind the safety car and then went to a red flag, this time almost immediately after Danylo Pronenko found the gravel.

The rain did stop and conditions improved. Once more, polesitter Aitken led after the restart until a second safety car appearance when Anthoine Hubert and Valentin Hasse-Clot collided.

The final restart came with just one lap remaining, which Aitken controlled to beat Ignazio D’Agosto to the chequered flag by six tenths of a second.

Unlike in race one, Ben Barnicoat‘s car lasted until the end for him to be able to finish third ahead of the Swiss Josef Kaufmann Racing duo of Kevin Jorg and Louis Deletraz.

Having started day tied for the standings lead and seven points ahead of Aitken, Jorg and Deletraz are now 13 and 21 points adrift respectively with 25 available for winning Sunday’s finale – which comes with its own morning qualifying session.

The three category veterans are now the only drivers who can win the title, as Hubert needed to outscore Aitken to keep his chances alive.

While the top five positions remained static during the race, there was some movement behind that as Dennis Olsen was pushed back to eighth by Matevos Isaakyan and Jake Hughes?either side of the safety car period.

Simon Gachet and Martin Kodric completed the top 10 after Ukyo Sasahara had an off-track moment to drop him to 17th.