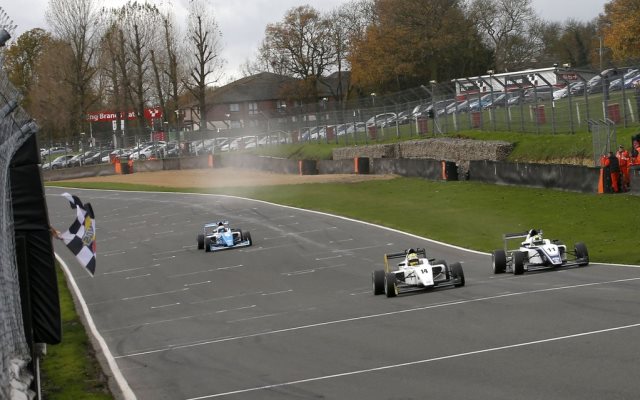 Ben Barnicoat held off Lando Norris and Harrison Scott to win race three in the?BRDC Formula 4 Autumn Trophy round at Brands Hatch to move level on points with the latter with one race to go.

Barnicoat, fresh from the announcement of his Formula 3 deal with Prema, had beaten double Saturday race-winner Norris to pole in qualifying by just 0.026 seconds.

He then kept the lead at the start of the race ahead of Norris and Scott.

The gap between the lead pair fluctuated in the early stages but never quite got as high as one second.

Barnicoat responded but Norris came back at him on the final lap and pulled alongside on the run to the chequered flag.

Scott had been almost two seconds off the lead but closed to within a second in the latter stages and was just 0.77s behind at the line.

However, he has now seen his Trophy advantage eliminated entirely by Barnicoat and the pair will go into the final race tied on points.

Barnicoat will start with the advantage of pole position courtesy of setting the fastest lap, while Scott – who led his rival by 45 points coming into the weekend – will only be fourth.

That’s behind Norris and Sisa Ngebulana, who finished almost 10s off the lead in fourth. Faisal Al Zubair was classified four laps down in fifth.