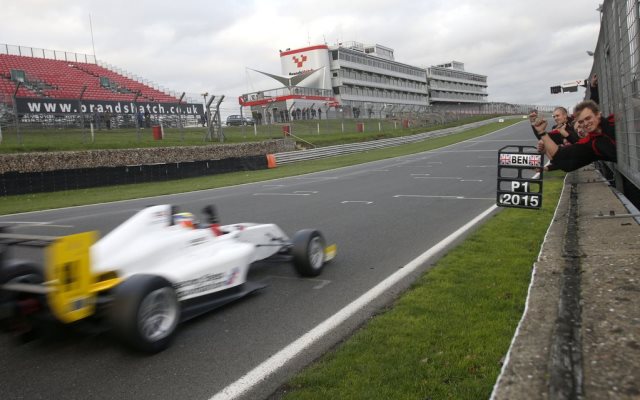 Ben Barnicoat took victory in the final race of the BRDC Formula 4 Autumn Trophy at Brands Hatch to claim the title.

Barnicoat’s victory in the penultimate race had put him level on points with erstwhile leader Harrison Scott and starting on pole position for the decider courtesy of setting the fastest lap, with his rival only fourth.

Positions were maintained at the start, with Barnicoat leading from Lando Norris with Scott still behind Sisa Ngebulana.

Norris remained close to Barnicoat for a large part of the race, but the Fortec driver pulled over a second clear on lap 16 of 25 and stretched that advantage to two seconds by the end.

Victory secured the title for Barnicoat, whose move to Formula 3 with Prema for 2016 was confirmed by the Racing Steps Foundation on Saturday evening.

?It?s a great feeling,” he said after the race.

“I had a bit of a tough time at Snetterton, with a few incidents, which I thought had ruled me out of contention for the title but Harrison made a mistake in race one yesterday and this weekend evened it back it out.

“It?s been a hard weekend, Lando has been on top form, so I had to give it my all and at no point could I give it 95 per cent. We did a great job and it?s great to win so a massive thank you to Fortec Motorsports for their help.?

Scott spend the entire race up behind Ngebulana, but could not find a way past to make it onto the podium as Faisal Al Zubair completed the five runners.

Scott had led the Trophy standings since winning the opening race at Snetterton last weekend, and had 45 points in hand over Barnicoat going into the Brands Hatch event, but crashed out of the lead in race one.