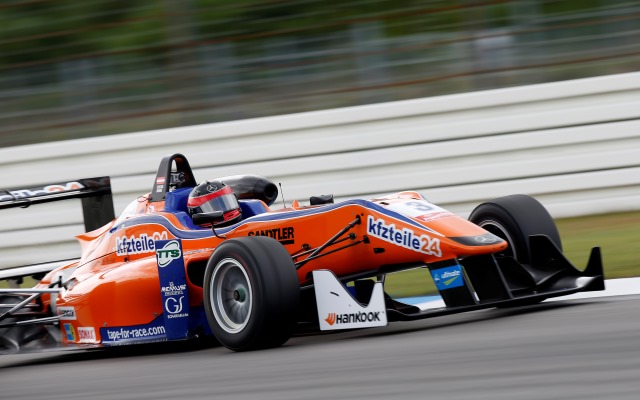 Lucas Auer showed that Mucke Motorsport’s Silverstone struggles were only temporary as he claimed pole position for race one of the FIA F3 European Championship Hockenheim from under the nose of practice pace-setter Antonio Giovinazzi.

The leading positions changed hands constantly for much of the 20 minute session, but the order had appeared to settle with a few minutes left on the clock with Giovinazzi holding P1 ahead of Auer. However, the Austrian – who started no higher than tenth for the three races at Silverstone a fortnight ago as his new team Mucke lacked pace – claimed top spot by over a tenth with his final effort.

Ed Jones was towards the pointy end of the timing screens throughout and wound up third ahead of top rookie Max Verstappen, who leaped ahead of Silverstone race winners Esteban Ocon and Tom Blomqvist late on, beating the Lotus F1 junior by just 0.002s.

Nicholas Latifi was seventh ahead of Auer’s team-mate Felix Rosenqvist, while John Bryant-Meisner and Jordan King rounded out the top ten.

Antonio Fuoco, winner of the third race at Silverstone, could only manage 18th with his final lap of the session.