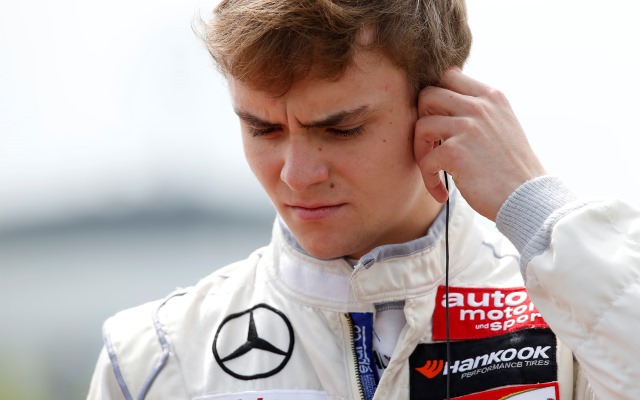 Lucas Auer secured his first win for Mucke Motorsport in the FIA F3 European Championship with a commanding victory in race one at Hockenheim.

The Austrian made a good start and, following a brief safety car period, escaped to claim a seven-second win and return Mucke to the top step following a difficult opening round at Silverstone a fortnight ago.

19-year-old Auer received his winning trophy from his uncle and FIA single-seater chief Gerhard Berger in the week that marked 20 years since the deaths of Berger’s friends and competitors Ayrton Senna and Roland Ratzenberger at Imola.

Ed Jones capitalised on a poor start for fellow Carlin driver Antonio Giovinazzi to move into second at the beginning of the race and the Dubai driver held the place throughout despite pressure from championship leader Esteban Ocon.

The safety car was needed after two incidents on a chaotic first lap. The first saw Max Verstappen make a rookie error by carrying too much speed into the hairpin and wiping out Nicholas Latifi, taking both out of the race. A couple of corners later, Michele Beretta made contact with Gustavo Menezes, who in turn took out Alexander Toril.

After the restart, Tom Blomqvist passed Auer’s Mucke team-mate Felix Rosenqvist to finish up fourth, while Fortec’s Mitch Gilbert claimed his best result in the series with sixth.

Jake Dennis scored his first points in F3 in seventh after overtaking Dennis van de Laar and then Felix Serralles before beating the ailing Ocon to the line, with Serralles also getting past the Lotus F1 protege to take eighth. Van de Laar dropped out of tenth with an issue late on, handing the final point to Spike Goddard.