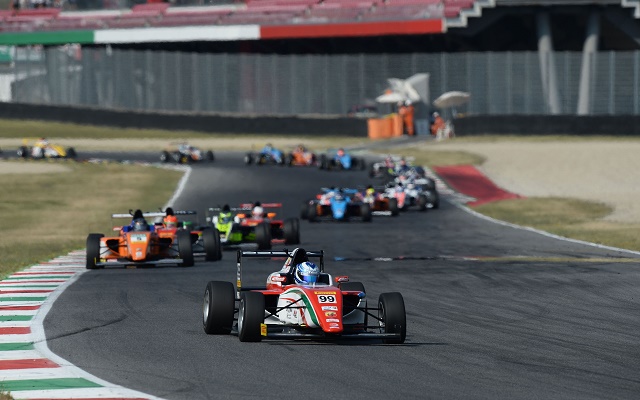 Championship leader Ralf Aron extended his lead at the top of the standings with a dominant win in race three at Mugello, which saw many of his rivals receive penalties for ignoring yellow flags.

Aron shrugged off the threat of Mucke’s David Beckmann in the first corner, and was never headed thereafter, winning by over five seconds.

Antonelli driver Joao Vieira had a great start and was up to fourth from eighth at the start, but then lost out to Ferrari junior Guan Yu Zhou and retired with mechanical gremlins.

Zhou spent most of the race right behind Prema teammate Giuliano Raucci but as unable to overtake. Behind them, Lando Norris was the man on the move, taking Mauricio Baiz for sixth.

Drama unfolded shortly afterwards, with Riccardo Ponzio spinning and being collected by Ecuadorian racer Fernando Madera, eliminating both racers on the spot.

Double yellow flags were out as a result, however, this was missed by many drivers, and they were all slapped with in-race drive through penalties.

This shuffled up the running order, and race two winner Marcos Siebert inherited third ahead of teammate Nico Rindlisbacher, who recorded his best finish in the series.

RB Racing’s Diego Bertonelli had dropped to last after stalling on the grid but moved upwards and was favoured by the host of penalties, finishing fifth. Zhou beat Raucci to sixth, who just about held off Norris at the line.