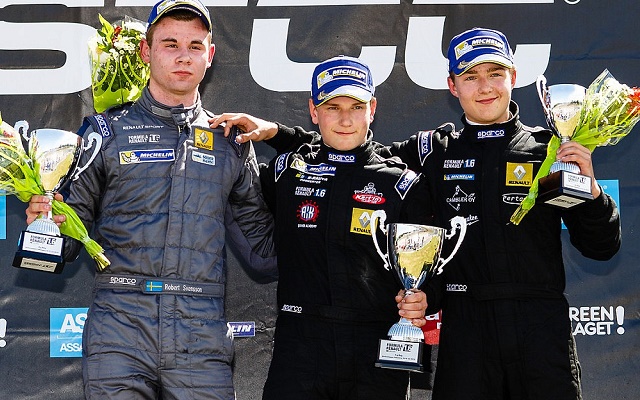 Korpivaara kicked off the action by converting his Saturday pole into a controlled win – his fourth of the season. Svensson was 1.3s off, while Puhakka completed the podium.

Oliver Soderstrom, Korpivaara’s main rival in the points, had qualified just seventh, but managed to limit the damage to his title chances as he finished fourth, a second up on Laurents Horr.

And it was Soderstrom who topped qualifying on Sunday, prevailing in a session that saw six cars separated by two tenths. Yet, on second-best laps, which determined the grid for Sunday’s first race, he lined up just fourth.

Korpivaara was, again, on pole, but allowed Svensson through on the opening lap and then retired while fighting for the lead. Puhakka, Soderstrom and fourth-placed Reuben Kressner all got within a second and a half of Svensson as the race went on, but the Swede held on to take the win.

The other Sunday race also went bad for the poleman – Soderstrom retired on the opening lap. With him out of the way, Puhakka charged to a maiden win, heading home Korpivaara and Svensson.

Horr was fifth, just as he was in races one and two.

Soderstrom’s retirement allowed Korpivaara to reclaim his lost championship lead and the Finn now heads the Swede by 13 points. Puhakka now sits third, a full 60 points down on the leader, with Horr and Svensson close behind.