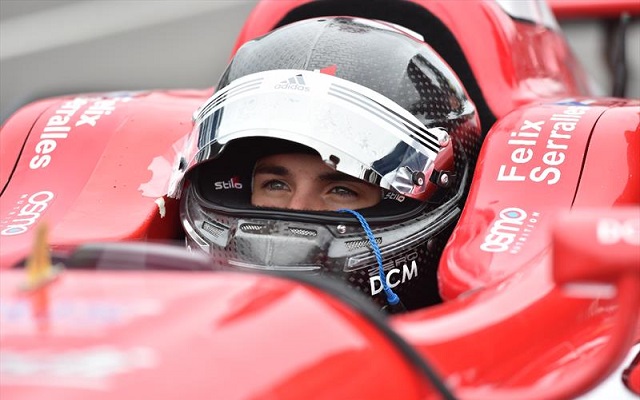 Felix Serralles celebrated his maiden Indy Lights victory in his second-ever oval race from sixth on the grid.

The race kicked off with front row starters Spencer Pigot and RC Enerson fighting it out for first, the latter eventually settling in the lead.

After about about 30 laps in, the leading group expanded as Kyle Kaiser and the Belardi duo of Juan Piedrahita and Felix Serralles joined the pack after overtaking Jack Harvey, who started fourth.

Enerson did manage to stretch his lead to a second, only to lose it when a spin from Kaiser brought out the caution.

The Juncos driver lost control of his car while being chased by Serralles but managed to avoid the wall and rejoin the field.

Enerson remained in the lead after the restart, while Pigot dropped five positions in just a few corners as a result of losing sixth gear in his car.

Serralles, now second, stayed close to Enerson and timed his charge for the final ten laps of the race. The FIA F3 graduate moved to the inside and was able to make the overtake stick, going on to build a lead of 5.5 seconds until the checkered flag.

Unable to keep up with the leading duo, Piedrahita had to settle for third to complete a Belardi 1-3, taking his first podium in the series in the process.

Max Chilton was one of the big movers of the race, fighting his way up to sixth from tenth ahead of the struggling Pigot and fellow Carlin driver Ed Jones.