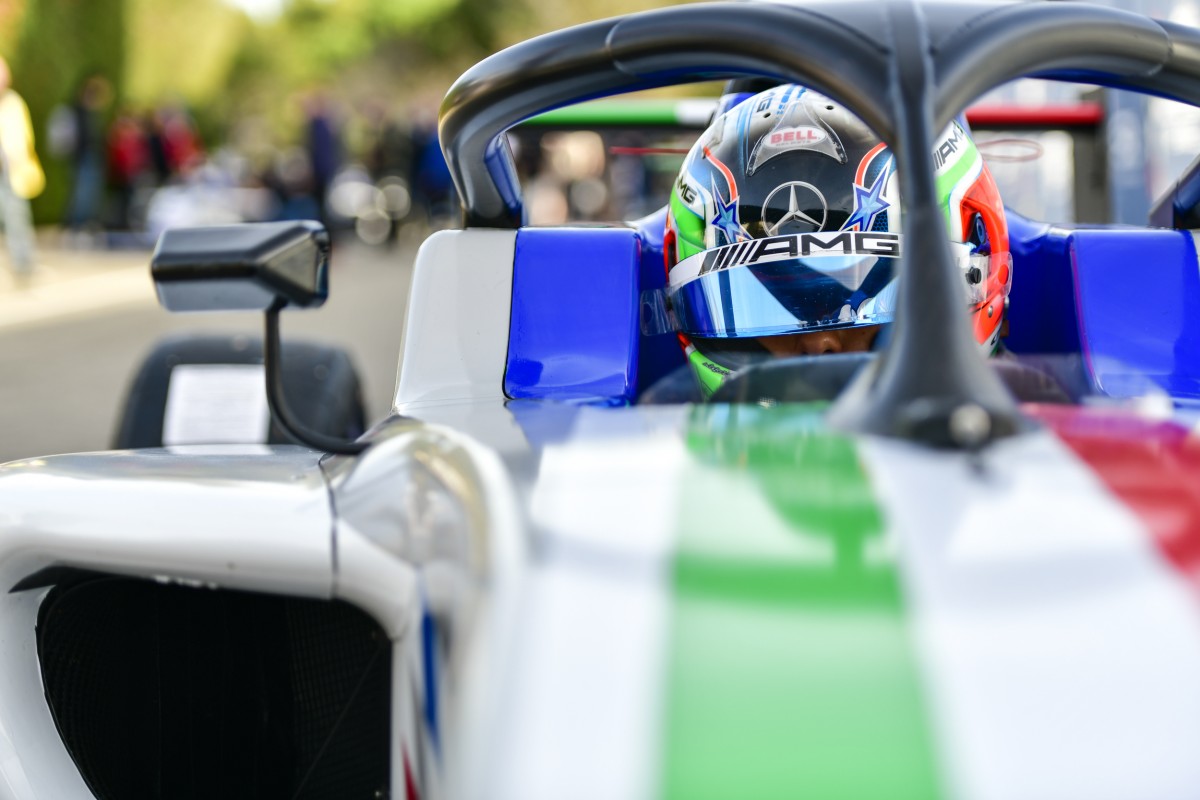 Antonelli started from pole and escaped being attacked into the opening corner, which was crucial for him then avoiding the chaos that occurred through the rest of the lap. He finished lap one 3.964 seconds clear, and had a lead of nine seconds on lap nine when the safety car came out and eradicated his advantage.

Starting immediately behind Antonelli were Austria’s Charlie Wurz and Germany’s Valentin Kluss, but their races ended fairly promptly as Kluss crashed into Wurz, puncturing a rear tyre for the latter and meaning both pitted straight away. Kluss returned to track at the back of the field, while Wurz retired.

There was even more drama behind them, as Chile’s Maria Jose Perez de Arce was wheeled off the grid and had to start a lap down, three cars initially failed to get off the line when the lights went out and France’s Pablo Sarrazin was spun around at turn one as several drivers cut the corner entirely.

Australia’s Costa Toparis got involved in an incident and broke his nosecone, while Portugal’s Manuel Espirito Santo and Brazil’s Pedro Clerot rose into second and third place and stayed there – out of trouble – for most of the race. Several seconds behind them at first were Spain’s Bruno del Pino and Switzerland’s Dario Cabanelas who made contact at turn one on lap two and Cabanelas got by.

Toparis was involved in the battle for sixth with Serbia’s Filip jenic and South Korea’s Michael Shin, with Shin passing Jenic at Signes. Denmark’s Julius Dinesen joined the battle on lap four and passed Toparis, as further up the road Cabanelas cleared Clerot at Beausset for third.

Dinesen gained another spot on lap five by passing Jenic, but he quickly got back past as they led a queue of seven cars. He was passed again though by Dinesen, putting him into the clutches of Toparis. On lap six the pair made wheel-to-wheel contact three times in one corner, with the final instance sending Jenic skyward.

After balancing on his left-hand wheels he crashed back down to Earth and had to retire, and further damage for Toparis meant he lost spots to Panama’s Valentino Mini and Ukraine’s Alex Partyshev – who had been sent to the back of the grid for the race – on the next lap.

Toparis’s front wing then flew off and he dropped back further, while Belgium’s Lorens Lecertua – who was shown the black-and-white flag for track limits abuse – found some debris, ran off track and lost the ground he had made up during the race.

At the end of lap eight, India’s Ruhaan Alva and Taiwan’s Ethan Ho went into the final corner side-by-side then rubbed wheels on exit. That sent Ho spinning backwards into the barriers, neccessitating the safety car the race finished behind. Both that incident and the one between Toparis and Jenic will be investigated post-race.

Verstappen’s explosive arrival in single-seaters – the first time around