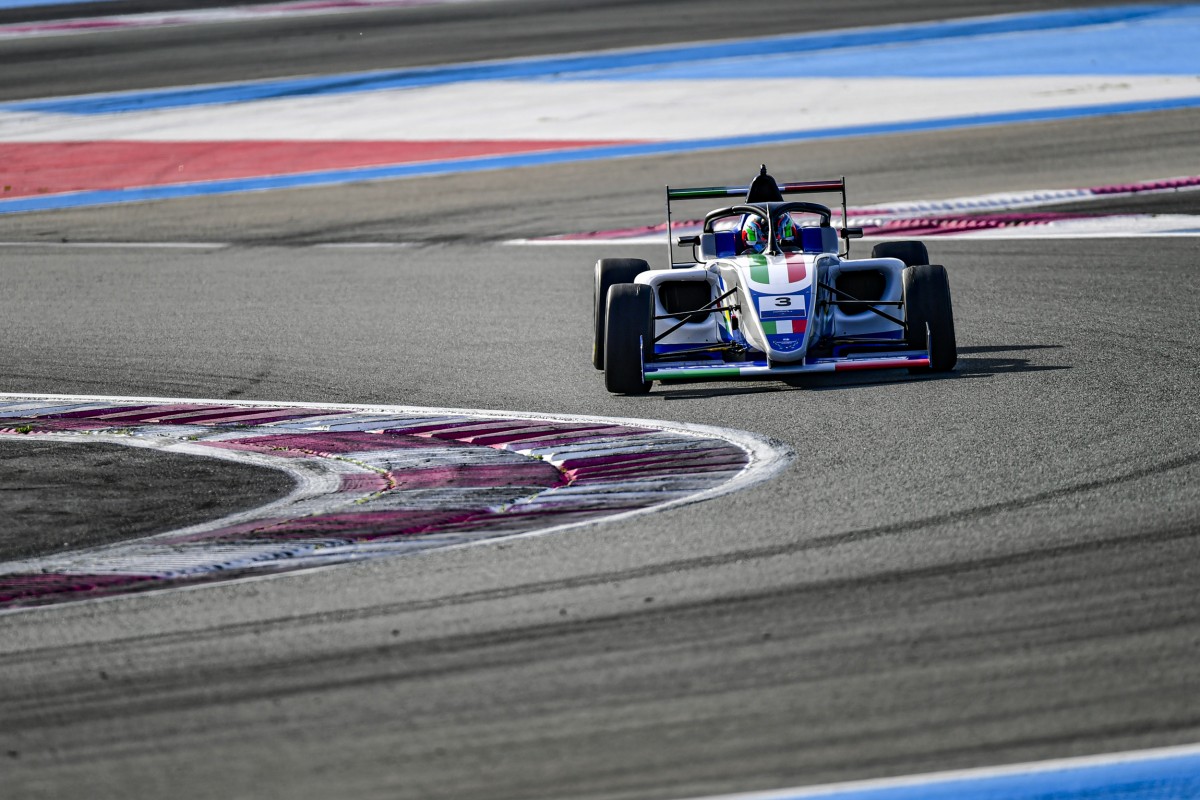 Andrea Kimi Antonelli was fastest in qualifying for the Motorsport Games Formula 4 Cup at Paul Ricard, but the Italian ended his session with a collision.

Although the Mercedes-AMG Formula 1 junior had topped both practice sessions on Friday, it did not look like he would be continuing that form at first in the 25-minute qualifying session on Saturday morning.

Portugal’s Manuel Espirito Santo was the first to set a flying lap, then Danish F4 champion Julius Dinesen brought the pace down into the 2m12s. The pair then pushed eached other to lower the pace over several laps before Georgia’s former Asian Formula Renault competitor Sandro Tavartkiladze set a 2m09.963s lap to go to the top.

Many drivers were having laps deleted due to track limits violations, and avoiding that fate was Germany’s Valentin Kluss as he left it late to set his first lap and immediately went quickest with a 2m09.145s.

Espirito Santo returned to second place, before Australia’s Costa Toparis bettered him, and at the 10-minute mark only the top top 12 drivers had lapped fast enough to qualify for the weekend’s races.

Next to top the times was Brazil’s Pedro Clerot, the first driver to lap sub-2m09s, and he headed Serbia’s Filip Jenic before both were jumped by Kluss who set a 2m08.383s.

Antonelli was down in 20th place at what was the halfway point of qualifying, when all 24 cars finally took to track. He improved to 13th place, then shortly after Clerot reclaimed pole position by 0.066 seconds.

With just over 10 minutes remaining, Antonelli finally showed his true pace and a 2m07.460s lap put him 0.857s clear of everyone else. His Italian F4 rival Charlie Wurz (Austria) rose to fifth place in his wake, then went second fastest next time by to reduce Antonelli’s advantage to 0.681s.

Wurz failed to improve further after he caught a kerb and spun, while Antonelli ended the session with another rapid lap that fell apart at the final corner as he went to pass Maria Jose Perez de Arce down the inside. The Chilean closed the door as Antonelli locked up and they made contact, with Perez de Arce spinning and stalling. Yellow flags were waved, then reds, meaning nobody could improve their pace. The collision is being investigated post-session.

Kluss went third fastest just before the incident, shuffling Clerot back to fourth. Espirito Santo qualified fifth but along with India’s Ruhaan Alva got shown the black-and-white flag for repeated track limits abuse.

Unable to set a flying lap that stood was Malaysia’s Alister Yoong, who also spun and stalled late in qualifying.