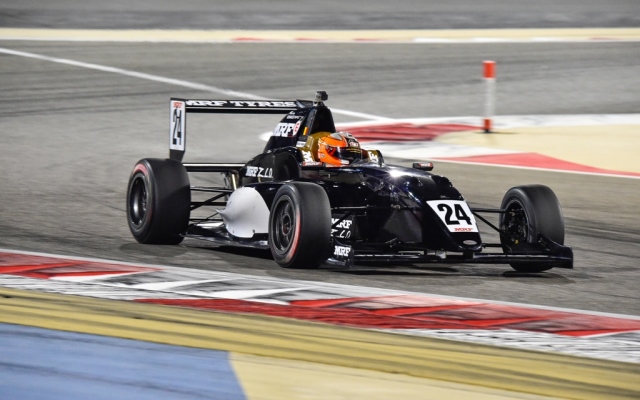 Alessio Picariello took pole position on his debut in the MRF Challenge in a close qualifying session for round two in Bahrain.

The 2013 ADAC Formel Masters champion, who this year finished fourth in Formula Masters China Series by winning the last five races in a nine-race programme for Absolute Racing, hit the top of the times with around 10 minutes remaining.

He then held on to pole under challenge from three other drivers, with the lead quartet separated by less than a tenth of a second, mirroring the GP2 qualifying session held earlier on the same World Endurance Championship bill.

“In the morning practice session it took me some time to get used to the car and tyres,” said Picariello.

“With only one practice session I knew I had to learn things fast. I felt comfortable straight away and was able to push in the qualifying.

“I am thrilled to be on pole position and amazed at how competitive this series is. Tomorrow will be tough but I am confident of going for the win.”

After setting the pace in practice, Nikita Troitskiy?came closest to toppling Picariello but fell 0.044s short.

The Russian beat Tarun Reddy by four thousandths of a second for a place on the front row, while Tatiana Calderon took fourth at 0.08s behind Picariello.

Pietro Fittipaldi had been leading prior to Picariello’s pole lap but failed to improve and was pushed back to fifth place.

Sixth was Picariello’s fellow Belgian Sam Dejonghe, returning to the MRF Challenge after last week winning an RACB-funded seat in the TCR Benelux series for 2016.

Harrison Newey, increasingly linked to a drive in European Formula 3 next season, was ninth and Nerses Isaakyan – whose twin brother Matevos is racing in GP3 in Bahrain this weekend – edged out single-seater rookie Max Fewtrell for 10th.

Another MSA Formula competitor joining the series for the event is Jessica Hawkins, but her session ended when she triggered a red flag without setting a time.

Nobuharu Matsushita led the standings after the first round but is focussing on GP2 this weekend, making Fittipaldi the effective leader with seven points over Calderon and 15 over Troitskiy.

The Bahrain event consists of two races, both on Friday, as opposed to the four held in Abu Dhabi.