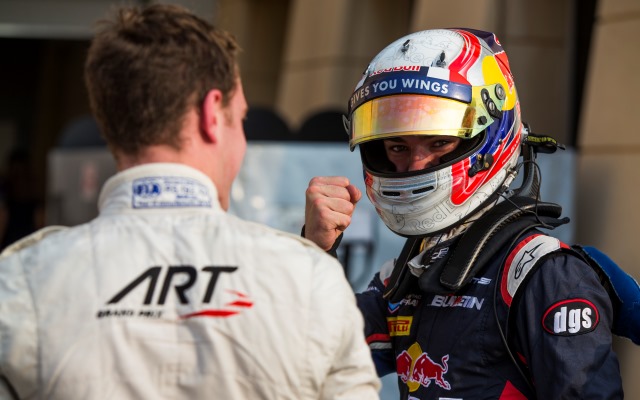 Pierre Gasly scored his second GP2 pole position in three events after winning a four-driver battle late in qualifying at the penultimate round in Bahrain.

It was champion Stoffel Vandoorne who led much of the session, but the Belgian was one of four drivers threading a fast lap together with five minutes left on the clock.

Raffaele Marciello initially went three tenths of a second clear of the Belgian, with Alex Lynn following him across the line but 0.013s down.

Red Bull junior Gasly then took top spot with his 1m39.572s, 0.076s quicker than Marciello, and Vandoorne had to settle for second, 40 thousandths of a second behind.

Gasly would go on to set a session-best first sector before the end but although he could not improve his overall laptime, none of the leading positions changed hands with the top four covered by less than a tenth just as in practice.

Second place on the grid will still give Vandoorne a good chance of taking a third win in as many feature races in Bahrain.

For Marciello, third is his best qualifying result since Monaco and he is yet to finish a feature race in the top five this year.

Behind Lynn, Jordan King got ahead of Norman Nato for fifth, having sat third behind Vandoorne and the Frenchman after the first runs.

Winner of the last two feature races and returning to GP2 after his Formula 1 stint with Manor, the American was just 16th after his first run.

He returned to an empty track in the middle of the session and climbed to fifth, but was then pushed back before the end.

Arthur Pic edged out Campos team-mate Rio Haryanto – winner of the sprint race in Bahrain in April – to take 10th.

Formula Renault 3.5 champion Oliver Rowland had to settle for 18th on his Status debut, one place ahead of fellow Briton Dean Stoneman in his second event for Carlin.

Daniel De Jong was 21st on his return from injury with Trident, while Gustav Malja was 23rd of the 24 drivers on his second GP2 appearance and first with Rapax.