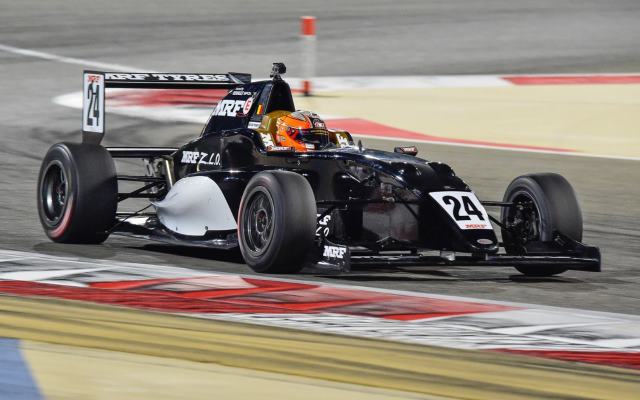 Alessio Picariello went from sixth to first in one lap to double up in the MRF Challenge event in Bahrain.

The Belgian, making his debut in the series in round two of the 2015-16 season, started on the third row on the reverse grid after winning race one from pole.

He quickly charged his way to the front and pulled past Matheus Leist at the end of the opening tour – cutting the timing beam just 0.042 seconds behind the Brazilian.

Once ahead, the 2013 ADAC Formel Masters champion gradually pulled away to a winning margin of five seconds as he completed a double in front of the World Endurance, GP2 and GP3 teams at Sakhir.

Leist held second until lap four, when he fell behind Pietro Fittipaldi and Nikita Troitskiy before Harrison Newey got by one lap later.

Fittipaldi held onto second place at the flag, less than a tenth ahead of Troitskiy, currently his main title rival.

Sean Walkinshaw started on pole but was pushed back to sixth on the first lap, and after getting close to the struggling Leist he was then passed by Tatiana Calderon and Sam Dejonghe.

Nerses Isaakyan came back to finish ninth from the back of the grid after a race-one retirement, while single-seater newcomer Max Fewtrell held off Dylan Young for 10th.