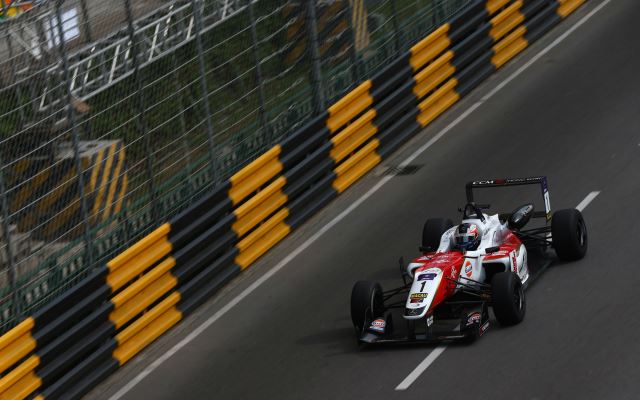 Antonio Giovinazzi came from fourth on the grid to pass Felix Rosenqvist and win the Formula 3 qualification race at the Macau Grand Prix, only to be penalised for first-lap contact as he took the chequered flag.

Giovinazzi had tangled with Dani Juncadella between Lisboa and San Francisco as they fought over second place, with the Italian’s front-right wheel hitting the Spaniard’s left-rear.

Juncadella was spun around, and a safety car was required once some drivers from further back got caught up as they tried to funnel past, with Alex Albon?rear-ending?Mikkel Jensen,?Ryan Tveter tagging the stationary Juncadella and Callum Ilott was left with nowhere to go.

While Jensen made it back to the pits and continued after a delay, Albon, Tveter and Ilott were eliminated.

Giovinazzi survived the clash, and after one lap behind the safety car, he was right behind his season-long rival Rosenqvist at the restart and slipstreamed into the lead before the braking point for Lisboa.

His lead was 1.7 seconds halfway through the 10-lap race but Rosenqvist had brought that down to 0.8s with a lap to go and was close enough to have a look into Lisboa, but not to really make a move.

Rosenqvist lost time later in the lap gave Giovinazzi a two-second margin at the line, but the Italian was immediately handed a drive-through penalty for the first-lap incident.

With that to be converted to a 20-second time penalty, Rosenqvist inherits the win, half a second ahead of Charles Leclerc.

The Monegasque rookie had challenged Juncadella with a better start off the line before Giovinazzi got ahead before the Mandarin right-hander.

He then stuck with the more experienced front-two after the safety car and was soon joined to make a four-car fight by a charging Alexander Sims.

Macau F3 veteran Sims started 13th after a low-key start to the event with Double R Racing but a great start had put him up to sixth by the time he passed the stranded Juncadella and a lap after the restart he took fourth from qualifying surprise Sam MacLeod into Lisboa.

He then set consecutive fastest laps to ensure he went with the lead trio as they pulled away, but couldn’t challenge Leclerc, who scored his first podium since the Norisring event in June.

MacLeod was fifth at the line in front of Markus Pommer, who started seventh instead of fifth because of a penalty – for the qualifying incident in which he slowed dramatically at the Melco hairpin to make space and impeded others – but got ahead of his Motopark team-mate?Sergio Sette Camara at the start of lap six.

Santino Ferrucci took eighth at the line after moves on first Arjun Maini and then Alessio Lorandi between restart and chequered flag.

Twenty seconds added to Giovinazzi’s race time will put him 10th. The penalty could be argued to be harsh on the Italian, who got very close to Juncadella but then kept his car straight parallel to the line down the middle of the road, and contact was only initiated by Juncadella moving ever-so-slightly to his right.

Rosenqvist’s Prema team-mates Jake Dennis and Lance Stroll could not progress into the top 10 and finished 11th and 13th respectively, either side of Dorian Boccolacci.