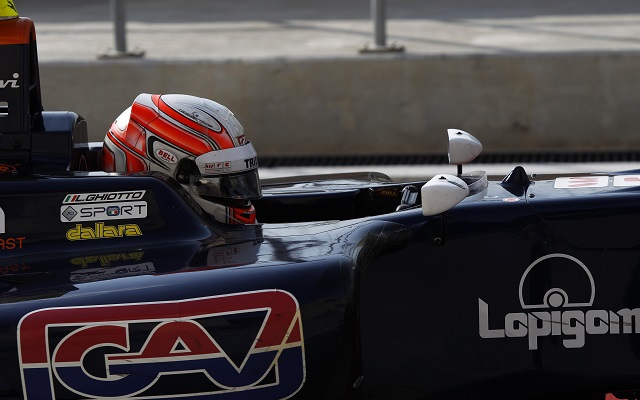 A day after losing his lead in the GP3 standings, Luca Ghiotto fought back by winning the second Bahrain race to reclaim a two-point advantage.

At the start, pole-sitter Alfonso Celis was the only one able to stay ahead of Ghiotto, who had an excellent getaway from fifth on the grid, but the Mexican could not fend off an overtaking attempt on lap two.

Just as Ghiotto was past the Mexican’s ART, rival Esteban Ocon responded by forcing ahead of Trident’s Artur Janosz to sit fourth behind Saturday winner Marvin Kirchhofer, who was another with a great launch.

The safety car and soon afterwards a red flag were triggered as a result of Sandy Stuvik heavily crashing into the wall at the final turn after colliding with Matheo Tuscher, neutralizing the action with 11 laps to go.

On the restart Ghiotto confidently held the lead with Ocon going past his ART teammates Kirchhofer and Celis in two laps to find himself two seconds away from first.

The Mercedes junior could not close in on Ghiotto though and the duo spent the rest of the day with a similar gap to complete a 1-2 for the fifth time this year.

The podium was completed by Koiranen’s Matt Parry, who made an aggressive move on Celis during the late stages.

The Mexican was slightly forced out wide at turn eight, dropping down to sixth and losing two further places before the end.

The top five was completed by Emil Bernstorff and Antonio Fuoco, as the duo followed Ocon past Kirchhofer after the restart.

The German had to settle for sixth, followed by Jimmy Eriksson, who was hit by front-row starter Jann Mardenborough at the start, Celis, Ralph Boschung and Alex Palou.

The 2015 GP3 season will conclude next week at Abu Dhabi, with Ghiotto and Ocon now the only two conteders to seal the title.