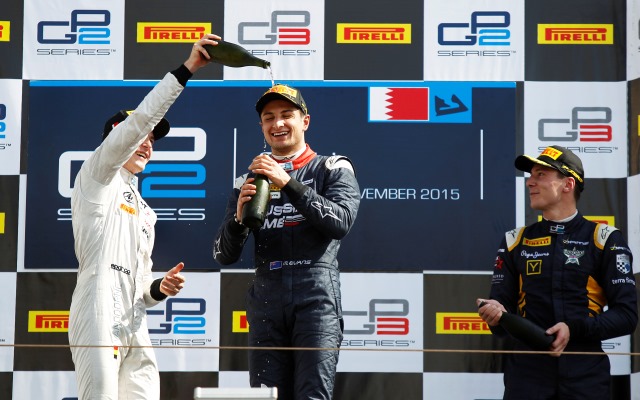 Mitch Evans pulled off overtakes on Stoffel Vandoorne?and?Alex Lynn to score his second win of the GP2 season in the sprint race at the penultimate round in Bahrain.

Lynn led from reverse grid pole while Vandoorne and ART team-mate Nobuharu Matsushita got flying starts from the fourth row.

Matsushita was overly aggressive in cutting across the track to the apex of Turn 1 though and clipped Rio Haryanto, spinning around and breaking the Indonesian’s front wing.

The safety car was called for later in the lap after a second incident in which Formula Renault 3.5 champion Oliver Rowland was launched over the top of Rene Binder‘s car and into the air when the Austrian slowed in front of him at Turn 5.

Vandoorne was up into second and chasing his first double victory in GP2 but instead of attacking Lynn after the restart he was having to defend from sixth-place starter Evans and was passed into Turn 4.

That initially gave Lynn a chance to break away, but Evans reeled him back in and forced him to defend at Turns 1 and 4 on lap 12.

The Russian Time man got down the inside of the DAMS driver at the first corner on the next lap, only to run deep and let Lynn back past.

Next time around, Evans cannily stayed behind Lynn at Turn 1 and then attacked him late on the brakes into Turn 4 and managed to secure the lead despite going wide again.

He quickly built a gap over Lynn, who was then passed by Vandoorne with six laps left.

The 2015 champion was able to eat into a 3.4-second advantage before the end, but Evans – who will test Porsche’s LMP1 car at the circuit tomorrow – still had 1.8s in hand at the chequered flag.

Lynn was 17 seconds in arrears by the end in a distant third, while Sergey Sirotkin snatched fourth away from Raffaele Marciello around the outside of Turn 12 with just three corners remaining, as the Russian moves back to third in the standings ahead of Haryanto.

Marciello just held off a charging Jordan King to the line while P3-starter Pierre Gasly recovered from falling outside the top 10 to be seventh.

Artem Markelov demonstrated Russian Time’s pace in the race to go from 15th to fourth but doing that ate through his tyres too soon and he was dumped back to eighth within the last few laps.

He did get the final point though ahead of Alexander Rossi and Norman Nato.

Nathanael Berthon was close to passing Vandoorne for third at one stage but faded and eventually pitted, as did the driver behind him in the early stages, Arthur Pic. Nicholas Latifi went from 14th to sixth on lap one but slipped back to 11th.