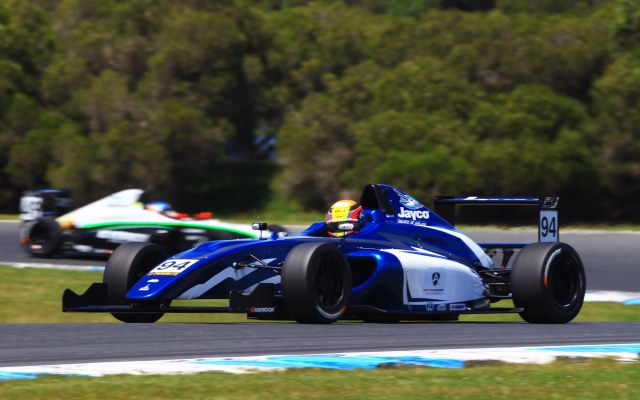 Jordan Lloyd has a good chance of wrapping up the inaugural Australian Formula 4 title on Sunday after winning the first two races of the penultimate round at Phillip Island.

A perfect day for the BRM driver combined with a challenging one for rival Thomas Randle gives Lloyd a 79-point lead with only 83 left up for the grabs after race three.

Lloyd topped qualifying by half a second and led the first race from start to finish, winning by eight seconds after a frantic race behind.

From third on the grid, Randle got up to second on the first lap and tried to take the lead around the outside of Lloyd, but a twitch dropped him back again.

That allowed front-row starter Zane Goddard to pull ahead into the first corner on lap two, only for Randle to return the favour exactly a lap later.

Randle wouldn’t be able to hold onto second though, succumbing to Tom Grech who charged up from sixth on the grid and swept around the outside of Randle at Turn 1 on lap eight.

Grech however was a hit by a fuel surge issue that slowed him with less than three laps to go, relegating him to ninth.

Will Brown had just seconds earlier repeated Grech’s move on Randle at the end of the pit straight and was able to inherit second place from his AGI team-mate at the next left-hander.

Behind Randle, Goddard was fourth at the flag but a five-second penalty for creeping out of his grid box before the start dropped him behind Harry Hayek and Jimmy Vernon.

After winning the Mexican Grand Prix-supporting F4 event three weeks ago, Luis Leeds had a nightmare race, stalling at the start, running wide at Turn 1, pitting to have grass removed from his car and going a lap down.

In race two, Lloyd came from fifth on the reverse grid and was up to third on the opening lap behind polesitter Vernon and Randle.

After a safety car for an off at Turn 1 for Goddard, Randle took the lead away from Vernon at the restart.

The pair would trade the lead twice on the next lap, and then went side-by-side again along the pit straight at the start of lap seven.

Lloyd was in their slipstream though and brilliantly passed both of them down the inside of Turn 1 to get a lead he would then built to two seconds before the end.

Randle was sucked wide and through the grass on the exit of the next corner, putting him down to ninth and last before pitting. He had been within 39 points of Lloyd after his Surfers Paradise hat-trick but must now stop his rival winning race three to take it to the final round.

Vernon was now free to finish second with Brown fending off Leeds for third, while Hayek and Grech completed the top six.