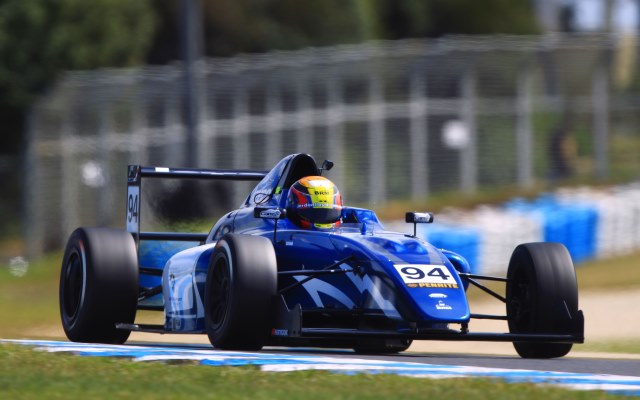 Jordan Lloyd became the first ever champion of Australian Formula 4 by completing his hat-trick of wins at the penultimate round at Phillip Island in the final race of the weekend.

Lloyd led from pole position but was challenged at first by his rival Thomas Randle.

Just needing to outscore Randle by four points, winning the race would be enough for Lloyd and he was able to pull away as Randle battled with Zane Goddard behind.

Lloyd took his third win of the weekend – and his second clean-sweep of the year – with a margin of eight seconds.

Tom Grech worked his way up ahead of Goddard for third, only to run wide at Turn 2 as he tried to pass Randle and fall down the order before retiring to the pits.

Randle then soon lost out to Goddard and Luis Leeds in quick succession to drop to fourth.

Goddard scored his maiden podium in second, just holding off the DREAM-entered duo of Leeds and Randle.

Harry Hayek was fifth while sixth was Will Brown, less than a tenth ahead of Jimmy Vernon who had been as high as fourth before an off-track excursion.