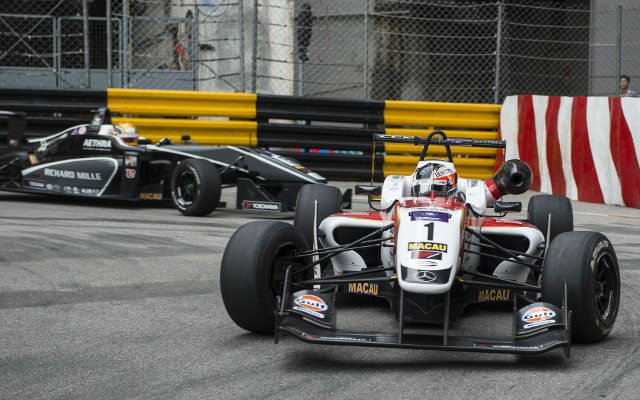 A good launch put Leclerc straight onto Rosenqvist’s tail through the first corner and he pulled off an outstanding overtake around the outside of Lisboa.

The field made it through most of the first lap unscathed, but a big crash after Fisherman’s triggered a red flag.

Gustavo Menezes, Ryan Tveter and Mitsunori Takaboshi were involved but all got out of their cars quickly and seemingly unharmed.

Just before the race was halted, Rosenqvist passed Leclerc through the first corner on lap two, but the Monegasque driver slipstreamed his way back into Lisboa.

Leclerc was swamped in the same location on the restart though, being passed not only by Rosenqvist but also Sam MacLeod.

That would be the pivotal moment of the race, with Rosenqvist able to open up a two-second lead before Leclerc repassed MacLeod with yet another out-braking move into Lisboa two laps later.

Leclerc set fastest laps in his pursuit of Rosenqvist but the Swede always had an answer before backing off a little in the last couple of laps, winning by 1.1s.

The magnitude of the achievement of second place for 18-year-old Leclerc was reinforced by him being sandwiched by two drivers in their mid-20s on their sixth starts in Macau.

It was Alexander Sims in third for Double R, replicating the podium from the qualification race.

He took the place when MacLeod – who impressed all week for West-Tec after scoring points just once during the European campaign – lost the rear of his car at Police and slapped the barrier.

MacLeod was forced to pit, but did rejoin towards the rear.

Antonio Giovinazzi came back from 10th place after the controversial penalty that robbed him of pole position to finish fourth, not quite able to do anything about Sims.

Markus Pommer took fifth ahead of Santino Ferrucci, improving upon his eighth place from 2014 with another trouble-free run.

Ferrucci was the first of four 17-year-olds in bottom half of the top 10.

Dorian Boccolacci was yet another 17-year-old with two clean races on his way to 11th ahead of last year’s podium finisher and Japanese champion Nick Cassidy after a challenging week for TOM’s.

Boccolacci’s Signature team-mate Alex Albon was 13th from the penultimate row of the grid ahead of Macau’s Chang Wing Chung.

Red Bull junior Callum Ilott, who was second-fastest to Rosenqvist in Thursday’s first qualifying before crashing on Friday and being caught up in Saturday’s first-lap pile-up, had another incident, skating down the escape road at Police.

Sergio Sette Camara and MacLeod set laps faster than anyone else after pitstops.

Dani Juncadella was a non-starter as a result of tub damage sustained in the aftermath of his incident with Giovinazzi on the first lap of the qualification race, having qualified second to his fellow former winner Rosenqvist.