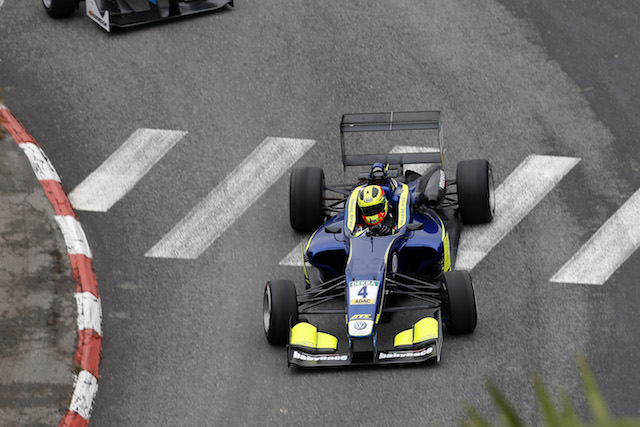 Alessio Lorandi claimed his first victory in single-seaters in the Pau Grand Prix with a lights-to-flag drive under pressure from new FIA Formula 3 European Championship?leader?Lance Stroll.

That he?clinched the landmark win just minutes after Max Verstappen sealed his historic Spanish Grand Prix triumph had a particular symmetry, Lorandi having come?highly recommended by the Dutchman when he moved from karts to F3 last year.

From his maiden pole position, Lorandi made a good start and immediately covered off Stroll.

Behind them, third-placed starter Sergio Sette Camara tried to shut the door on?Nick Cassidy and they collided, heading straight on into the barriers on the outside of Turn 1. A pile-up ensued, causing a lengthy safety car period.

In the 22 minutes of green-flag racing that followed, Lorandi had less than four tenths in hand over Stroll for most of the time, but he avoided mistakes and Stroll never had a proper chance to make a move for the lead.

George Russell was promoted into third by the Sette Camara-Cassidy crash but never really had the pace of the front two. He held off?Callum Ilott for a podium result that lifts him to third in the standings, having been outside of the top 10?at the start of the weekend.

Mikkel Jensen was fifth just ahead of impressive rookie?Joel Eriksson, who made a fine move around the outside of?Ryan Tveter at Gare after the restart.?Tveter kept another rookie?Niko Kari at bay for seventh, with?Arjun Maini ninth.

Pedro Piquet beat?Ben Barnicoat to the final point, both having pitted under the safety car after sustaining damage. They got past erstwhile championship leader?Maximilian Gunther after Barnicoat threw his car down the inside of the German’s at the hairpin.