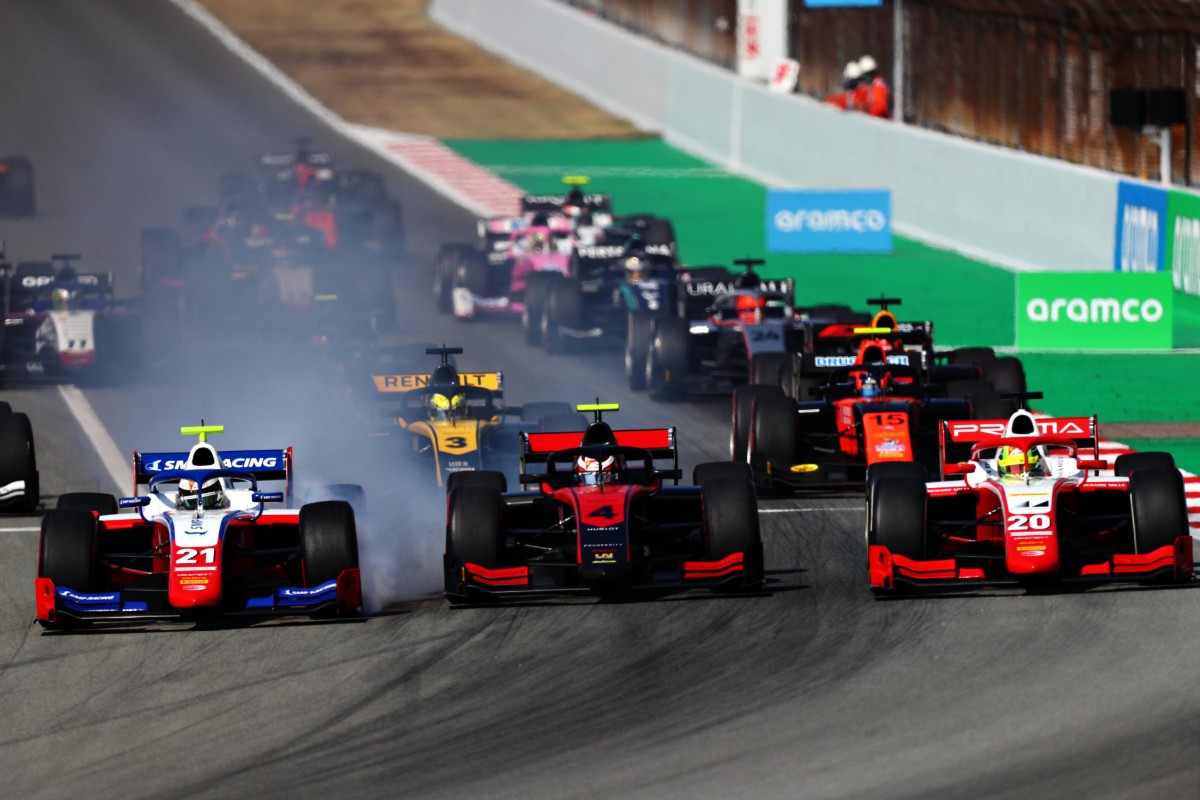 A deep dive into the statistics of the first half of any Formula 2 season can often be a better indicator of what to expect in the second half than the points standings. Here’s Formula Scout’s assessments of 2020 so far

Establishing the pecking order of the 2020 F2 season as the field arrives at Spa-Francorchamps has proved far trickier than its immediate three predecessors, where it was clear that points leaders Charles Leclerc, George Russell and Nyck de Vries were all F2 champions in waiting.

Virtusoi Racing’s Callum Ilott may have an 18-point cushion at the top of the drivers’ championship after six rounds, but there has been nine race winners from seven teams across the 12 races so far, and plenty to suggest Ilott won’t have it all his own way.

Such is the competitive nature of the season, Ilott has stood on the podium on just three occasions – 2013 GP2 champion Fabio Leimer is the only eventual F2/GP2 champion to score as few podiums in the opening six rounds. And If that season is anything to go by, we’re in for a thrillingly unpredictable second half of the season.

Average grid slots, as well as points scored in the feature and sprint races, have also been calculated to break down Ilott’s advantage and where he’s still lacking.

Virtuosi drivers in a one-lap league of their own… 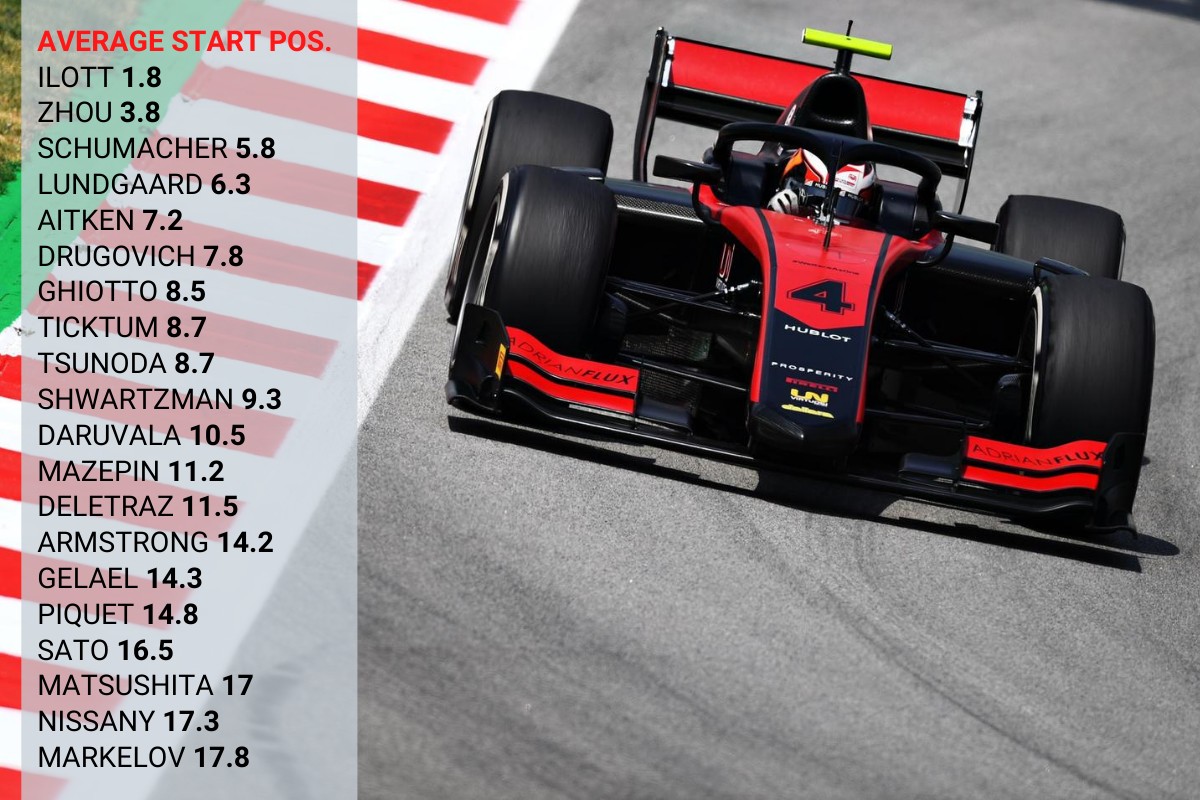 While this year’s F2 races have been as unpredictable as ever, Friday’s qualifying sessions have featured one constant – points leader Ilott qualifying in the top three.

It’s a streak that stretches all the way back to Monza last year, where Ilott scooped his maiden F2 pole just one week after the horrific accident at Spa involving his then and former team-mates Juan Manuel Correa and Anthoine Hubert.

Aided by three pole positions, Ilott has averaged a grid slot of 1.8 so far this season, with his team-mate Guanyu Zhou an average of two places behind on 3.8. But Zhou is yet to find the one-lap form that took him to pole – the second of his F2 career – by over four tenths of a second in the 2020 season opener at the Red Bull Ring.

Mick Schumacher – third-best if you take average qualifying positions – has an average grid position of 5.8, a big indicator of the one-lap advantage that the Virtuosi drivers are enjoying. However, pole position has only been converted into the feature race win on one occasion, when Ilott dominated the second Silverstone feature race.

While Virtuosi evidently has a supreme and consistent package in qualifying, one-lap speed has long been one of Ilott’s key strengths, having previously earned more pole positions (10) than current McLaren Formula 1 driver Lando Norris (9) in the 2017 FIA European Formula 3 season.

Use qualifying ‘supertimes’ and you’ll find MP Motorsport’s Felipe Drugovich in a surprise third place, which is an impressive feat considering the Brazilian’s inexperience and the fact that the Dutch outfit had never taken pole position in the series before Drugovich snatched pole for the Silverstone opener.

But he has a reputation from previous categories of being a single-lap specialist, and he’s well clear of his experienced Japanese team-mate Nobuharu Matsushita, who is still yet to qualify inside the top 10 during his fifth season at this level.

Renault junior Christian Lundgaard enjoys a similarly distinct advantage over his ART Grand Prix team-mate Marcus Armstrong, whose relative pace in both qualifying and the races plummeted from the first Silverstone round onwards.

Despite sitting three places behind his Prema team-mate Robert Shwartzman in the standings, Schumacher possesses the better qualifying record so far of the team’s two Ferrari juniors.

Interestingly Charouz Racing System duo Louis Deletraz and Pedro Piquet are separated by little in the qualifying ‘supertimes’, yet Haas F1 reserve Deletraz has scored 65 points to Piquet’s tally of two and the small pace differential has translated into Deletraz having a grid spot on average three places higher than Piquet’s – a testament to F2’s competitiveness.

Williams F1 reserve Jack Aitken has the weakest standings position relative to his placing on qualifying averages. Aitken, who finished fifth in the points last year, currently sits down in 14th place in a tricky third F2 season – although his qualifying pace has improved compared to last year even in what is subjectively a stronger field this season.

…but the competition is much closer in the races 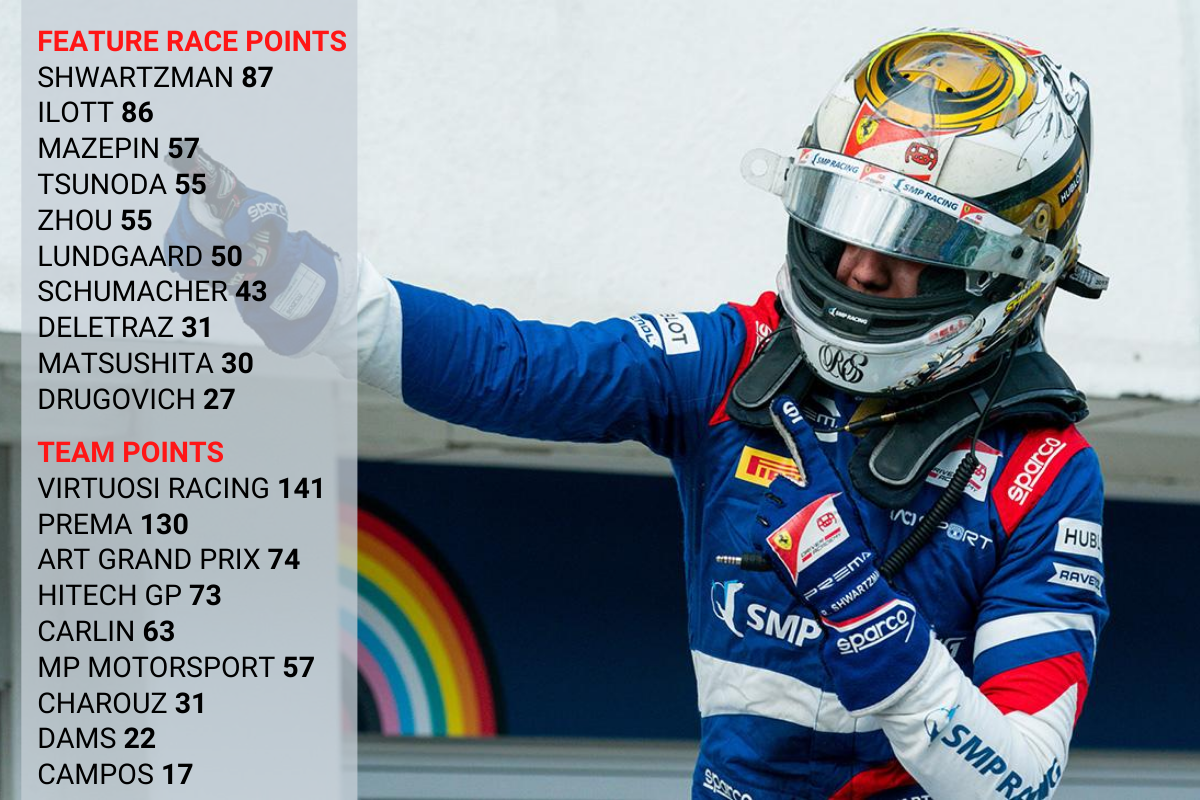 Ilott tops the race pace averages but it’s Shwartzman who has scored the most points in the feature races this year – not counting the nine bonus points Ilott has earned from his three pole positions.

Ilott was fastest in the season opener, the scene of his first F2 win after he inherited the lead when Zhou suffered mechanical woes, and went unchallenged in the closing stages when Schumacher threw his Prema-run car off the road.

He topped the race stint averages in both races at the Hungaroring but failed to win either from pole, the latter due to a perfectly managed strategy by series veteran Luca Ghiotto that earned him and Hitech GP victory by less than half a second. Ilott was also comfortably fastest at Barcelona before a couple of late safety cars dropped him into the pack, which promptly beat him up and spat him out in fifth place by the chequered flag.

Ferrari junior Ilott’s points lead could be a lot greater based on the fact that he is the fastest driver on average in both races and qualifying. Without the stall in the first Silverstone feature race, or the spin in the subsequent sprint race and the safety cars in the Barcelona feature race, we could be looking at a much more comfortable championship leader.

Ilott’s supreme race pace is made all the more impressive by the comparative lack of pace of team-mate Zhou. The Chinese driver starred in the first Red Bull Ring race before dropping out through no fault of his own, charged to second place on softer tyres in the first Silverstone feature race, and nicked an unlikely podium from the Barcelona feature race.

But Zhou has been otherwise unable to match his team-mate’s highs and is 45 points adrift. It’s not an unassailable lead, but by every metric, Ilott has had the measure of Zhou since the Renault junior’s cruel mechanical failure in Austria.

Shwartzman seems to have maximised the points available to him in the feature races in the majority of cases, despite only displaying the eight-best qualifying speed on the grid. His effective management of the Pirelli rubber – shown by his win from 11th on the grid in Hungary – has been a particular asset and one unusual for an F2 rookie.

DAMS’ Dan Ticktum, who will be partnered by Red Bull junior Juri Vips for the next three rounds, has the third-best average race pace but just 21 points in the feature races. Ticktum often struggles with extreme tyre drop-off after a competitive stint, and his frustration over this drop in performance was seen in his radio outburst at Silverstone.

This is slightly odd, as DAMS’ set-up means it takes longer for its driver to put temperature into the Pirelli rubber than its rivals. So while slow up to speed, it means Ticktum and now-injured team-mate Sean Gelael tended to have the tyre in the right operating window at a time when the track was more grippy and fuel loads are lower later in races. That has its own disadvantages, as Ticktum has already said to the press, but it doesn’t explain why after being in that operating window his tyres then wear harder and faster than others. He needs to find a solution to claim his first feature race podium.

Yuki Tsunoda was fastest in the rain-affected (and thus excluded from our race averages) second feature race at the Red Bull Ring and quickest in the first and fourth races at Silverstone. His advantage over his Carlin team-mate and fellow Red Bull junior Jehan Daruvala is clear in qualifying but it swells even further in the races.

Nikita Mazepin has the clear edge on Hitech team-mate Ghiotto in the points but is trailing the Italian on pace over a single lap and a stint. But the Russian has begun to turn the tables on his more experienced team-mate and took his maiden F2 win in dominant style at Silverstone.

In both qualifying and the races, HWA Racelab and Trident are by far the least competitive teams. Both have only ever enjoyed stints at the top of the weekend’s ‘supertimes’ due to bolting on an extra set of tyres. For example, Williams F1 tester Roy Nissany set the fastest 10-lap race stint in the first Red Bull Ring sprint race, only after making a pitstop.

HWA’s Artem Markelov, who finished runner-up to Leclerc in the 2017 championship, earned a season’s best 11th in Barcelona qualifying. This may have signalled a breakthrough for the so-far-pointless Russian, but a lacklustre race average in Barcelona (101.503%) does little to suggest he’ll be troubling the points or merit.

Ilott has failed to pick up a sufficient amount of points in sprint races, in particular when compared to previous champions. In fact, his tally of 23 points from the first six sprint races is comfortably lower than the points total of any of the top four drivers in the championship last season at the same point.

He spun out of second place in the first Silverstone sprint when he had the pace to win and has failed to improve or even maintain his starting position in every single sprint race this season so far. Ilott is either unable to demonstrate similar pace to what he produces in the Saturday races or, as in Barcelona, his Virtuosi car’s set-up chews through the tyres too fast in traffic.

Fortunately for Ilott’s title hopes, Shwartzman has managed just 16 points in the sprint races, but this total would have almost certainly passed Ilott’s had it not been for a collision with team-mate Schumacher while fighting for victory in the second Silverstone sprint race and where the pair were identically matched at the front on race pace.

Lundgaard’s title challenge has been bolstered by some stellar sprint race drives, including his maiden win at the second Red Bull Ring round. Without the front-left tyre failure in the second Silverstone sprint, which was down to a wear problem he’d been suffering all weekend rather than an impact, he’d likely have the strongest Sunday race tally of all.

Deletraz has earned more points from the sprint races than the feature races but is still searching for that elusive maiden F2 win, while Schumacher matches his old European F3 title rival Ticktum with three sprint race podiums. 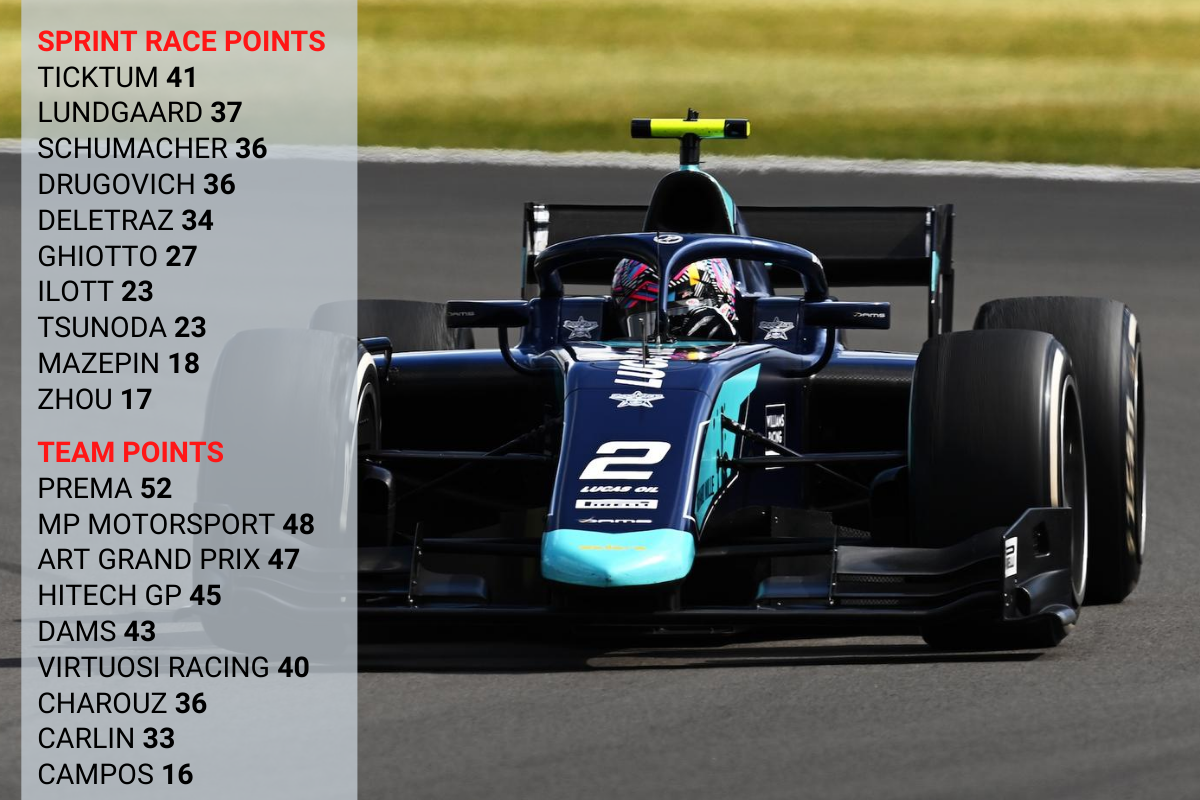