Recently, Formula Renault 2.0 has found itself between two classes of FIA’s unified junior single-seater ladder, F4 and F3. With the massive numbers the FIA F4 championships have attracted in this silly season, one would expect Formula Renault 2.0 might have to deal with a drop in interest.

And yet Formula Renault 2.0 NEC doesn’t seem to be affected in any way as it’s kicking off with a healthy grid of 30 drivers and 16 newcomers to FR2.0 racing.

The 2014 edition was quite possibly the most competitive season in the history of the series. With no dominant leader and different Eurocup drivers shaking up the field, the close racing produced 11 different winners and a title fight amongst several drivers going into the final round.

Fortec’s karting graduate Ben Barnicoat put on an impressive and consistent performance to claim the title and will now move on to the top drawer of FR2.0 racing, Eurocup. Runner-up Louis Deletraz will also participate in Eurocup but the Swiss racer is set to return to NEC to fight for the title. Meanwhile, Seb Morris, third in the standings, has joined GP3 with Status.

The 2015 frontrunners will be hoping to find similarly enticing career prospects at the end of the year. Below, we take a look at those vying for the top spots in this latest edition of FR2.0 NEC. 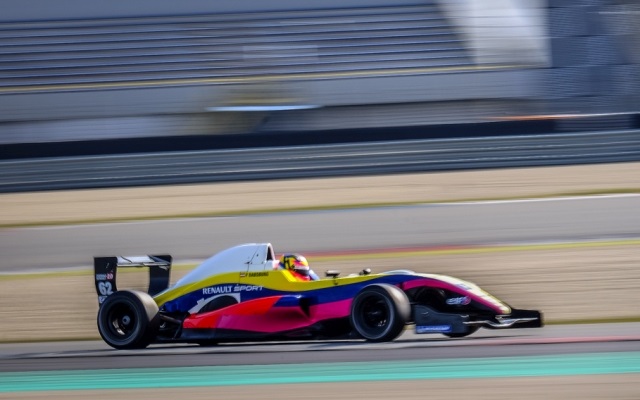 Huge lineups and uninterrupted success have been Fortec’s motto in NEC recently as the squad helped Jake Dennis, Matt Parry and Ben Barnicoat to the championship in the past three years. There won’t be much of a change in their approach this time, with the Northamptonshire-based team starting the season with a talented list of six entrants.

Two racers from their Eurocup team will join the squad for full-time NEC drives. Headlining the lineup is one of the best FR2.0 rookies of the past season, Callan O’Keeffe. Having finished seventh with a maiden win to boot, the South African driver successfully bounced back from a difficult ADAC Formel Masters season in 2013, which had seen him lose his Red Bull Junior Team membership.

20-year-old Luke Chudleigh is also set to combine Eurocup and NEC, after spending two seasons in Alps with Tech 1. The Canadian was only able to score ten points in his first season, but he showed improvement in his sophomore campaign, which he ended 12th in the standings.

Alex Gill, Fortec’s sole driver in Protyre Formula Renault last year, secured a full-time deal with the team. The 17-year-old youngster was fourth in the now-defunct national FR2.0 series, taking one victory and nine podiums in 15 races during his maiden season in single-seaters.

Ferdinand Habsburg, who also ended his first car-racing campaign in fourth, graduates from Formula Renault 1.6 NEC, another series that has since ceased to exist. Habsburg also raced in Toyota Racing Series New Zealand this winter, taking 11th with two podiums.

After Barnicoat’s success last year, Fortec also signed two karting graduates to complete their line-up. Force India junior Jehan Daruvala will graduate to cars after a superb karting career. The 16-year-old Indian’s most notable achievements from the last two years are being the Super One KFJ champion, runner-up in the competitive German Karting Championship and third in the CIK-FIA KF World Championship.

Zachary Claman DeMelo is another driver with a long list of great results. Two-times Canadian Rotax Senior and 2014 Florida Winter Tour TaG Senior champion as well as third in last year’s Rotax Senior Grand Finals, the Canadian had extensive testing in FIA F3 over the silly season, but eventually landed a seat in Formula Renault 2.0 NEC. 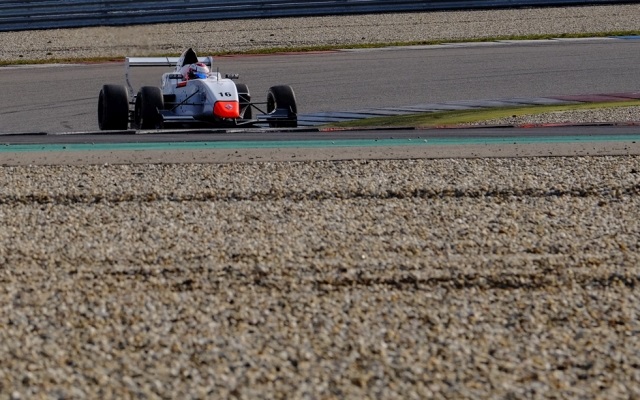 The respectable German squad was the team with the most race victories last year, picking up five courtesy of Louis Deletraz, Kevin Jorg and Gustav Malja. That feat can easily be repeated in 2015 as they have retained the successful Swiss duo, Deletraz and Jorg, both of them taking on double full campaigns in both Eurocup and NEC.

Having lost the title on a small margin, Deletraz is definitely a championship contender again this time around as he takes on his third full season in the series. If he manages to be at the sharp end more often than he was in 2014 while retaining his consistency, he will be a very tough opponent.

Unlike Deletraz, Jorg was only present in NEC part-time in the previous year but his performances in the three weekends he took part in were impressive. Three poles, two victories and another podium mean the Swiss driver will definitely be a challenger this year.

Team boss Josef Kaufmann will also give the chance to two promising karting graduates. Nikita Mazepin has been one of the most successful Russian karters of recent years, finishing second in the CIK-FIA KF World Championship and sixth in the WSK Champions Cup. Although this is his first full-time year in single-seaters, he has been preparing for a long time now, with guest appearances in the MRF Challenge and the AsiaCup, as well a full-time Toyota Racing Series campaign this winter.

The team’s final signing was Dries Vanthoor, younger brother of sportscar superstar Laurens. The Belgian was set to race in Formula Renault 1.6 NEC, but the series being canned forced him to join 2.0 NEC instead. He showed encouraging speed in the final pre-season tests which makes him one to watch. 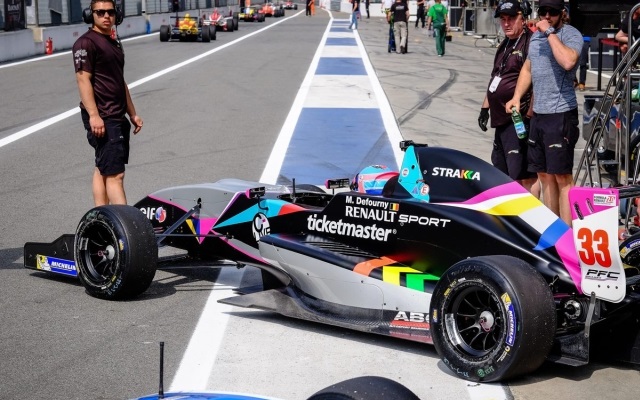 2015 sees Strakka Racing’s full-time entrance to Formula Renault 2.0 racing as they join both the Eurocup and NEC. The British squad will take on the latter with a strong trio of Formula Renault rookies.

Belgian Max Defourny moves to the category after a strong single-seater debut in Formula Renault 1.6 NEC, where he ended up fifth. His pace in pre-season testing has been more than impressive as he was one of the fastest not only among the NEC drivers, but in the Eurocup field as well.

He will be joined by Irishman Charlie Eastwood. The 19-year-old driver spent his first car racing season in BRDC F4, taking tenth with two podiums. He then showed even more promise in the Toyota Racing Series, where he was sixth in the standings with three podiums and regularly featured at the sharp end.

Finally, Valentin Hasse-Clot has also landed a seat with the team, graduating from French F4. Hasse-Clot, 19, also prepares for his second car racing season after a positive debut last year when he finished tenth overall. 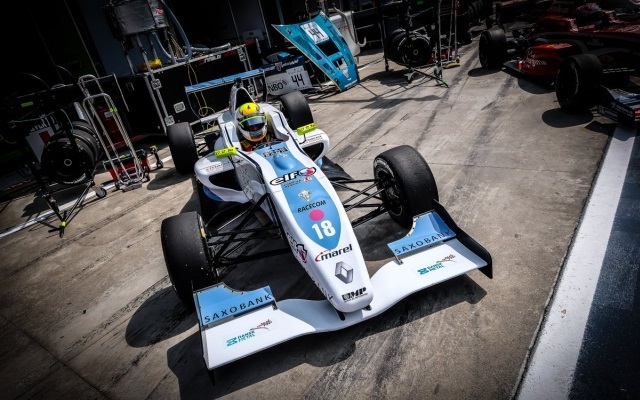 Manor have entered the first event with three cars, opting for experience in their team, just like they did last year with the pairing of Steijn Schothorst and Andrea Pizzitola. Dennis Olsen, last season’s Eurocup runner-up will return to the series after taking third two years ago as a karting graduate. Testing in only three out of six Eurocup pre-season days makes him eligible to do NEC full-time, but he is only expected at Monza, Silverstone and Assen.

Olsen will pair up with reigning French F4 champion Lasse Sorensen. The 18-year-old, younger? brother of GP2 and FIA WEC driver Marco, will focus on his Eurocup campaign over the season and is set to do the three aforementioned NEC rounds. Finally, experienced Formula Renault racer Ignazio D’Agosto joined the team for Monza as a last-minute signing, but it remains to be seen if he returns for more NEC later in the season. 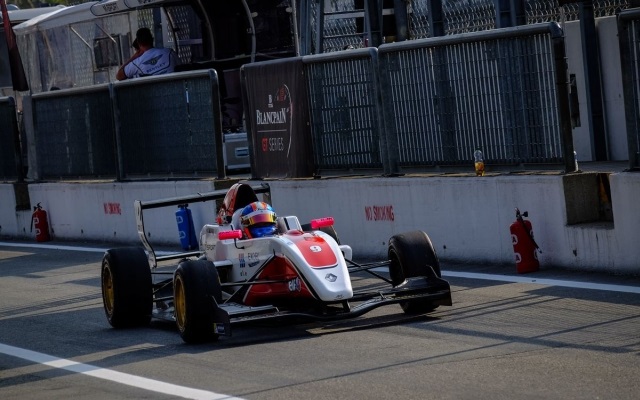 In 2014, Aurelien Panis, Levin Amweg and Callan O’Keeffe were, perhaps, the most even lineup in FR2.0, taking turns as the fastest driver at ART Junior Team. With all of them gone, the French squad will begin the new season with a new trio. Two drivers from their Eurocup squad join them for the NEC season opener with both of them eligible for full-time drives.

Ukyo Sasahara‘s debut in the series last year saw him post a podim and a retirement, both of which he didn’t repeat for the rest of the year. Taki Inoue’s protege was one of the most consistent drivers of the season and with a bit more experience, he should be a force to be reckoned with.

17-year-old Darious Oskoui will return to junior single-seaters after a two-year-break and has confirmed his intentions to do the full NEC season. The Swiss driver last raced in French F4, taking sixth in the standings ahead of the likes of FR3.5 racer Egor Orudzhev or Mazda Road To Indy stars Florian Latorre and Nico Jamin.

Felix Hirsiger, who in 2014 ended his sophomore season in French F4 in third with 11 podiums and two victories, was set to make his FR2.0 debut with ART, but will be absent from Monza for undisclosed reasons. 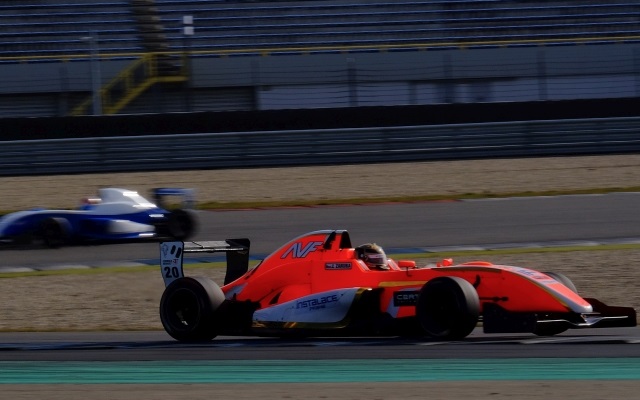 Adrian Valles’ team had a strong presence in NEC last year with three full-time and three part-time drivers. However, there wasn’t much success for the Spanish squad, their best driver Matthew Graham only taking 12th in the standings. With another big line-up of five cars for 2015, they’ll be certainly looking for a change in fortunes.

Josef Zaruba was a pleasant surprise this past season. Graduating from Radical cars, he did need some time to adapt to single-seaters but ended the season with a pole position and the team’s sole podium finish. He returns with the team for another year and should be the squad leader if he maintains his form from late 2014.

Another driver to stick around for a sophomore season is Roy Geerts. The 2013 Formula Renault 1.6 NEC champion had a quiet transition to the FR2.0 level with only two top-ten finishes and the overall position of 21st in the standings.

Spaniard Inigo Bikuna, who started to race for the team in the second part of the 2014 season, is one of AVF’s two confirmed Eurocup drivers but also plans to race in NEC. Whether he will do a full campaign or not is yet to be seen but he is eligible to do so. 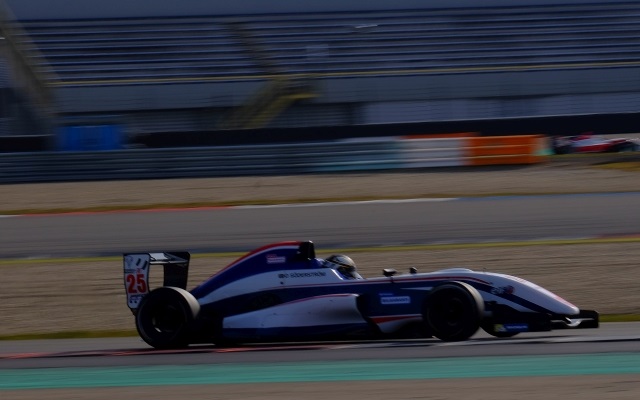 Two Swedish teams will take part the 2015 edition of the series. 2013 Formula BMW Talent Cup champion Robin Hansson will stick with his family-run team of Fragus BR Motorsport after the 18-year-old Swede had a relatively quiet first season in the series with a best finish of eighth. This season he won’t be the sole entry for Fragus BR with compatriot Oliver Soderstrom in the second car. The 16-year-old youngster spent the last couple of years in Formula Renault 1.6 championships, ending up seventh in NEC and eighth in Nordic.

Prizma Motorsport is one of two new teams joining the series. Although they have two entries, they will kick off with one driver in Pontus Fredricsson. The Swede is another product of Formula Renault 1.6 racing, taking fourth in Nordic with one victory and seven podiums last year.