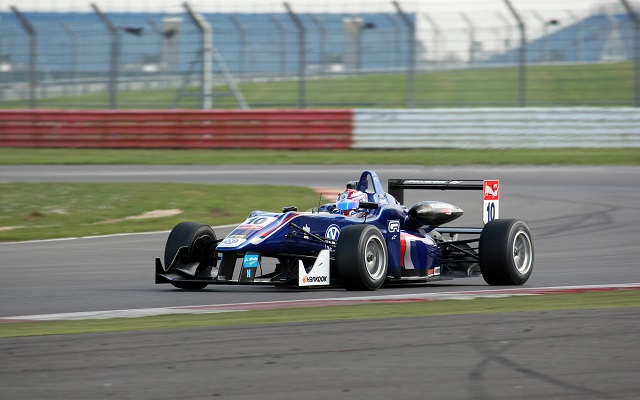 Starting second on the grid, Russell beat Leclerc into turn one, with Carlin team-mate Antonio Giovinazzi also getting past the Van Amersfoort driver briefly.

Giovinazzi even challenged Russell for the lead at Village but ran deep, and was re-passed by Leclerc into Brooklands.

The safety car was needed at the end of the first lap after Michele Beretta, Tatiana Calderon, Sergio Sette Camara and Sam MacLeod were all eliminated on the spot.

Russell got a good restart but Leclerc kept the pressure on and remained within around a second for much of the race before the Briton pulled away late on.

The pair took to the top two spots on the podium just hours after being involved in contact in race one before they even crossed the line to take the green flag after a safety car start.

Giovinazzi finished in third to claim his second podium finish of the day.

Prema rookies Lance Stroll and Brandon Maisano made good starts to finish fourth and fifth respectively, while Alex Albon followed up his P4 finish from race one with sixth this time around.

Race one winner Felix Rosenqvist started from 35th and last after being excluded from the results of Friday’s second qualifying session, when he had completed a pole treble. He staged an incredible recovery drive however to take seventh.

He secured that place by breaking out of a queue that had formed behind Fabian Schiller, who ran sixth after the first lap.

Pietro Fittipaldi followed Rosenqvist past the West-Tec driver for eighth, but Schiller held everybody else behind him until the penultimate corner of the race.

Jake Dennis – who started sixth but lost a lot of ground on the opening lap – tried to claim the place around the outside of Vale but contact was made, putting the British driver out on the spot with rear-left damage.

There was plenty of fighting for positions in the train behind Schiller, and included a couple of incidents of note when Dorian Boccolacci and Callum Ilott both went spinning around within a few corners – the latter after contact with Markus Pommer that broke the German’s front wing and forced him to pit.