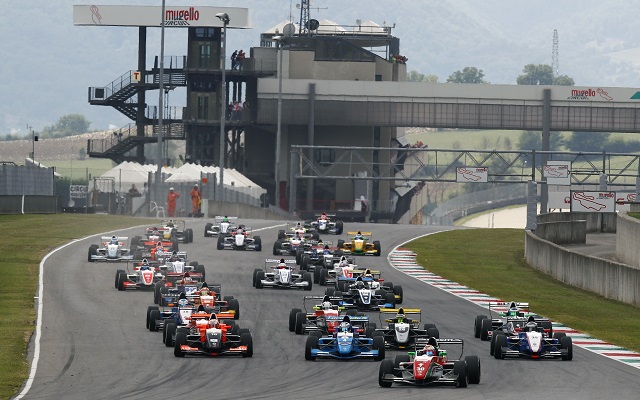 After a groundbreaking season in 2012, which saw established names Daniil Kvyat and Norman Nato battle it out for the title, 2013 saw the Alps series return to being a high-class testing ground for Eurocup Formula Renault rookies and future prospects. In a surprising development, it also saw complete dominance from the Italian Prema Powerteam squad, whose drivers won all 14 races and locked out the top three in the standings.

While it’s entirely unclear as to which team or driver will star in Alps in 2014, the grid that has been put together for the series opener at Imola is, as expected, stellar, and is likely to pave the way for a hotly-contested season.

Below is our preview of Formula Renault 2.0 Alps action in 2014. 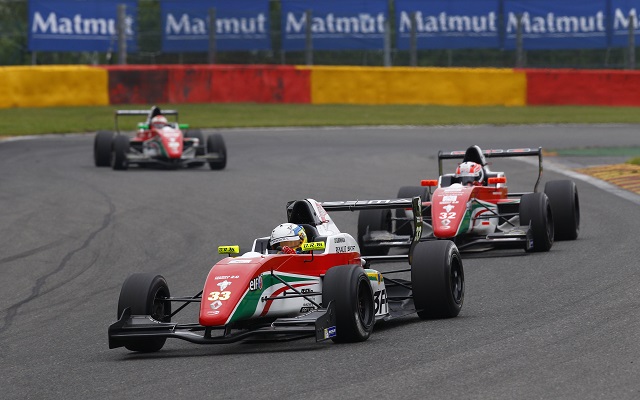 The Italian team’s 2013 campaign was a thundering display of dominance, as it led Ferrari Driver Academy starlet Antonio Fuoco to a major title in his first year in cars, while simultaneously hugely raising the profile of Abarth graduates Luca Ghiotto and Bruno Bonifacio. The aforementioned trio well and truly stole the show, accounting for 100% of the race victories in last year’s Alps season.

As strong as Prema is, it appears that a repeat of 2013 is highly unlikely. The team will only field two full-time entries now and, while both drivers should be capable of producing good results, neither of them is expected to challenge for victories right away.

Their new signing – Singaporean racer Andrew Tang – should be their best bet for serious achievements, having taken a surprise title in the very competitive 2014 Toyota Racing Series field in the off-season after a learning year in Formula Renault in 2013. His participation in Alps this year seemed to be uncertain due to possible military service commitments in his native Singapore, but having made a last-minute switch from Jenzer to Prema, that appears to be no longer a threat.

Prema’s second driver is Alex Bosak from Poland, a relative veteran of the Alps series. He contested the full schedule in the championship in 2012 and 2013, failing to score points in either campaign. However, he’s looked generally on-pace during his stint in the FDA-run Florida Winter Series and, with Prema, he has the best machinery he could ask for to start delivering results.

Prema’s Eurocup lineup – Bruno Bonifacio, Hans Villemi and Dennis Olsen – are all entered as Wildcards and will contest the season opener, where any one of them could realistically pick up a victory. 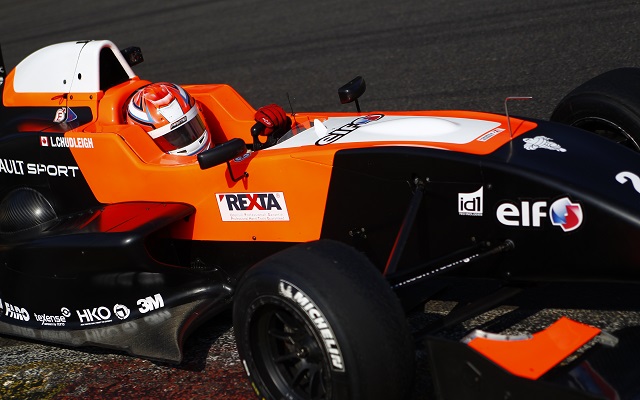 The French team continue to be a major asset to the Alps championship and, this year, are set to provide a strong four-car lineup for the full series schedule.

Canadian racer Luke Chudleigh made his single-seater debut in Alps last year and placed 26th in the standings. After a learning campaign, he is retained by Tech 1 for a proper assault – the team hopes to see him regularly among the frontrunners but, given the strength of the grid, consistent solid points finishes could appear to be a more viable goal.

Formula Masters China graduate Akash Nandy joins Tech 1 for his first year in Formula Renault racing. He was a title contender in his respective series last year but will probably need some time to adapt to European racing.

The rest of the full-time lineup is completed by Formula BMW graduate Hugo de Sadeleer and Patric Armand, who makes the switch from NEC. It’s likely to be a learning year for both of them.

Tech 1 will also field Wildcard entrants at Imola in the form of their Eurocup lineup of Egor Orudzhev, Anthoine Hubert and Vasily Romanov. 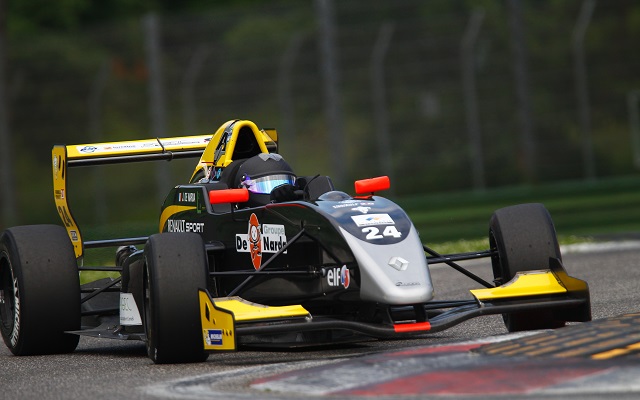 Having originally been set to field three cars on a full-time basis in the 2014 season, ARTA will now make do with two, as the previously announced deal with Indian racer Parth Ghorpade has not materialised for now.

Heading ARTA’s lineup is French driver Simon Gachet, who took 14th in last year’s Alps standings with the team. With his experience from the rookie campaign, the 20-year-old could very well be a potential victory contender as he’s shown lots of promise throughout his career, having been the V de V single-seater Challenge champion in 2011 and third in French F4 in 2012.

The second driver in their lineup is James Allen, an Australian karter who made a successful transition to cars, taking fifth in the Formula BMW Talent Cup Grand Final in 2013. For three of the seven rounds, they will be joined by ARTA’s Eurocup driver Darius Oskoui, a race winner in French F4. 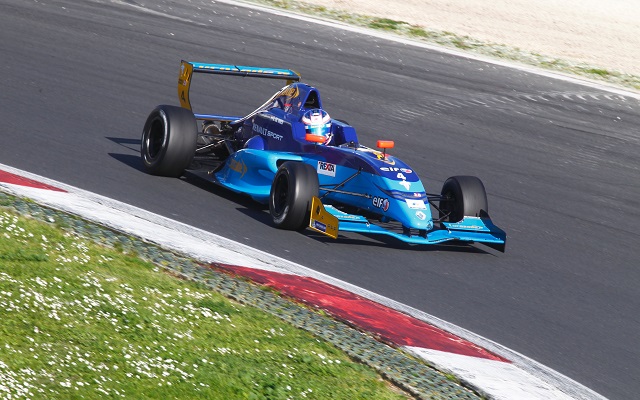 In 2012, Koiranen took the Alps drivers’ title with sophomore Formula Renault racer Daniil Kvyat. It seems they’re hoping to pull a similar trick in 2014, as the Finnish squad announced they will be fielding Nyck de Vries in both the Eurocup and the Alps series this year.

The Dutchman is expected to do the full campaign and, as such, is the clear favourite for the title. Backed by McLaren, he made headlines in 2012 with an excellent debut season in the Eurocup, but went on to largely struggle in 2013, salvaging his campaign with five podiums in the last three rounds of the season. He was very strong in Eurocup pre-season testing and, as such, might very well pick up titles in both championships.

Having signed an experienced driver, Koiranen also wound up securing one of the most promising rookies of the 2014 crop. Enter George Russell, a Brit with a stellar karting background who is widely regarded to be one of single-seater racing’s most promising newcomers in 2014. Having originally signed with Prema, Russell made a surprise switch to Koiranen and, given his pre-season testing form, will be a serious threat at the front.

Koiranen GP will also continue their partnership with SMP, who have placed Vitaly Larionov and Mikhail Tarasov into the series for 2014. Larionov finished runner-up in Formula Abarth National Trophy in 2013, while Tarasov graduates from karting. 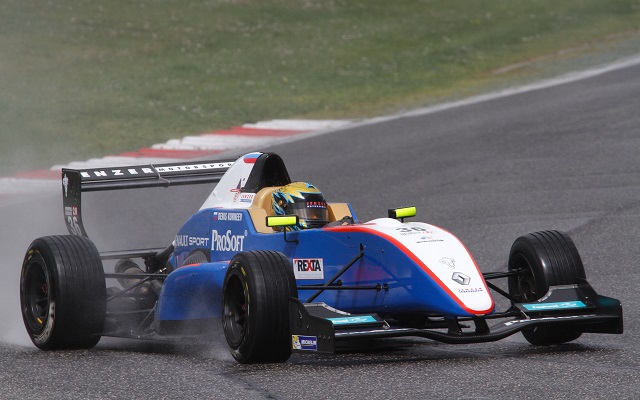 While Kevin Jorg ensured Jenzer’s presence at the front in Alps 2013, the team didn’t have a very good campaign in the Eurocup and, as such, will only focus on the former series for this year.

The Swiss team will retain Denis Korneev, who had a solid rookie year in Alps last year, picking up ten points. Korneev also did well in the Toyota Racing Series during the off-season, finishing as best ETEC racer in eighth.

Making their debut with Jenzer are two German rookies – Marek Bockmann and Dennis Anoschin. For Bockmann, this will be his first year in cars, while Anoschin has a solid frontrunning French F4 campaign under his belt.

Finally, Chinese racer Yuan Bo will be taking the fourth seat vacated by Tang for Imola. Bo is signed up for the full-season of Formula Masters China, which has one clash with the Alps schedule. 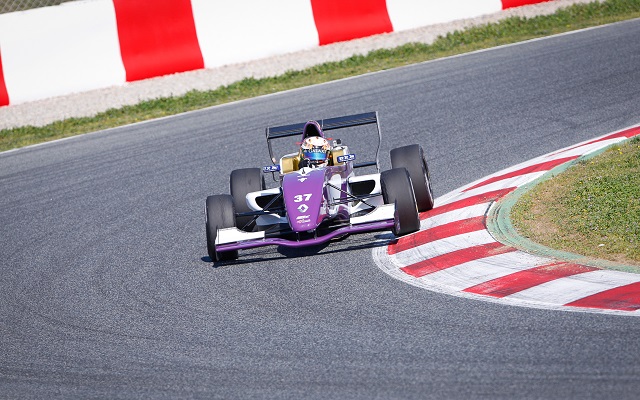 A newly-rebranded Interwetten team enters the 2014 Alps season with loads of ambition, evident from an impressively competitive lineup.

Swiss racer Matheo Tuscher, who was the champion in Formula Pilota China in 2011 and starred in the now-defunct FIA F2 in 2012, taking the runner-up spot, makes a long-overdue return to single-seaters, having been absent for most of 2013.

He is joined by British F3 National Class champion Sun Zheng, while, for round one, the team is also fielding the perennially-underfunded two-time Toyota Racing Series champion Nick Cassidy.

While they’ve managed to test with predominantly strong drivers so far, the results have been hard to come by, with Interwetten apparently still looking to recover from their 2013 slump. 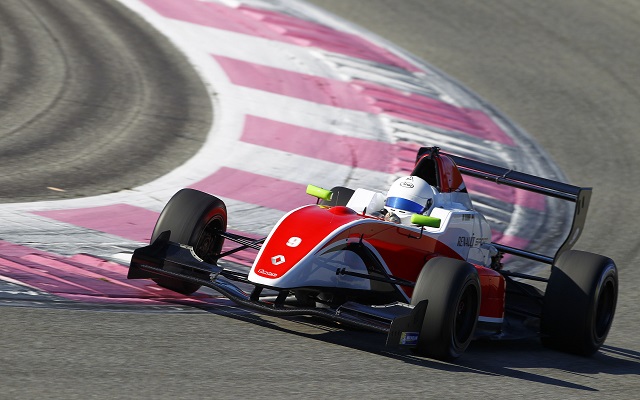 Having been the strongest team in Formula Renault NEC over the recent year, Fortec now enter the Alps championship with an appropriately stellar lineup.

Monegasque Charles Leclerc is the big name here, making his debut in cars at the age of 16 after an immensely successful career in karting. It appears he won’t take long to adapt to single-seaters, as he’s already ran right at the front during his appearances in Eurocup testing.

Croatian Martin Kodric is another high profile driver from the karting scene who’ll make his full-time debut in cars in the Alps series. He came third in the Protyre FR Autumn Cup last year and was quick, if very inconsistent, in his Toyota Racing Series campaign this winter.

Rounding out the trio of karting graduates is Thiago Vivacqua, also with some serious successes prior to his step up to single-seaters. He raced part-time in the NEC series last year with ART, which could come in handy during his rookie year in Alps.

Seb Morris, the new addition to the Caterham F1 Academy, is set to do Alps rounds alongside a full NEC campaign. He was third in Formula Renault BARC in 2012 and finished runner-up in BRDC F4 last year.

Fortec’s Eurocup drivers – Matt Parry, Jack Aitken and Martin Rump – are all rookies as well, so they’ve expectedly been entered as Wildcards for the season and the Imola round in particular. 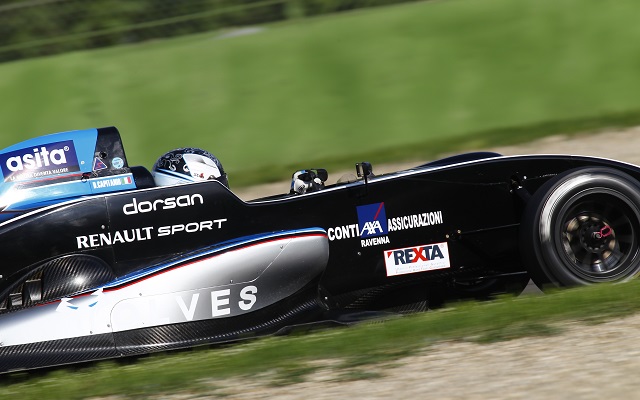 Italian squad JD Motorsport has only confirmed one entrant so far in Russian driver Matevos Isaakyan. The SMP-backed rookie was a frontrunner in last year’s French F4, impressed in the Toyota Racing Series and then made headlines with his impeccable form in Eurocup pre-season testing at Aragon with AVF.

Cram Motorsport return to the series after part-time participation in 2011 and 2012. Having won the Abarth title last year, they bring over champion Alessio Rovera, who picked up an impressive rookie title in his first year of car racing. ADAC Formel Masters graduate Stefan Riener was expected to fill the second seat, but appears to be absent from Imola.

BVM Racing and TS Corse will both field two-car entries. The former will run sophomore racers Dario Capitanio and Semen Evstigneev, while the latter has signed Pietro Peccenini and Matteo Gonfiantini.