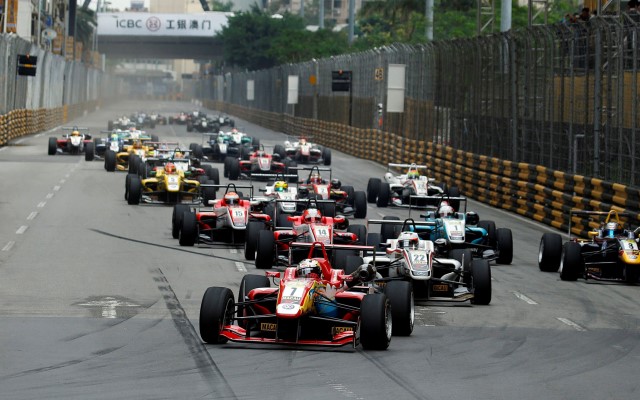 This weekend sees the curtain come down on the junior single-seater calendar with the biggest single event of the year, the Macau Grand Prix. The race isn’t the barometer for future F1 success that many make it out to be (none of the current F1 grid won there), but it still provides an opportunity to watch a number of the most promising young drivers around attacking one of the most challenging circuits in the world. Here’s our guide to the class of 2013.

Last year’s winner Antonio Felix da Costa heads the entry list in difficult circumstances, taking the Carlin seat vacated by Daniil Kvyat who will be at the United States Grand Prix after getting the nod for the 2014 Toro Rosso seat over the Portuguese driver. He obviously has to start amongst the favourites, but he appears to thrive on confidence and his mind set could be crucial. In theory he will be fired up and keen to impress, but time will tell.

Felix Rosenqvist was the man who got closest to Felix da Costa in last year’s race. His second place last year came at end of a slightly lacklustre campaign in Europe but this year he’s been superb, and dominant on more than one occasion. This will be the Swede’s fourth start at Macau – his third with the Mucke team.

The man who beat Rosenqvist to the European title has to be considered a contender by default. Raffaele Marciello had a fairly quiet run to eighth last year on his Macau debut but he and Prema Powerteam have been the package to beat in Europe and the Ferrari protege will be aiming for nothing other than the win this time around in his final F3 race.

Marciello’s team-mate Alex Lynn took a surprise pole position on his Macau debut last year with Fortec. His form has been a little on and off this year with Prema but he finished the campaign strongly and if he’s as good around Macau as he was last year he’ll be a contender. Joining Lynn under the famous Theodore Racing banner at Prema is Lucas Auer, who had a tough Macau debut with Van Amersfoort last year but has matched Lynn for most of this year. Esteban Ocon makes his top-line F3 debut in Prema’s fourth car having impressed while testing. If he appears in the top ten the Formula Renault 2.0 graduate will be doing very well. 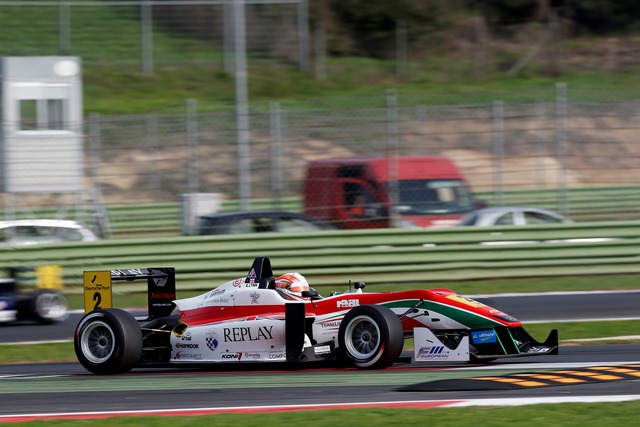 Lynn is in a position to improve on his third place last year (Photo: FIA F3)

Felix da Costa is part of a six-car team at Carlin. Fellow Red Bull Junior Carlos Sainz returns to F3 after a year away and will want to turn his talent into a headline result on what will be his third Macau F3 start. Harry Tincknell had a solid run to fifth in the European Championship this year and was ninth on his Macau debut last year with Fortec, and his ability to stay out of trouble could put him in contention for a podium.

Jazeman Jaafar is another returnee, starting his fourth Macau and returning to Carlin after a tough time with TOM’S last year. A podium on the streets of Monaco was the standout result of a difficult Formula Renault 3.5 campaign, while he won twice on his F3 qualifier at Brands Hatch. First-timers Jordan King and Nicholas Latifi complete the Carlin line-up – the former after an impressive rookie campaign that saw him take the British crown and finish sixth in Europe, while the latter bagged a couple of top fives in the European Championship.

Mucke have had a difficult time this year with their non-Rosenqvist cars, and only bring two to Macau to be filled by non-regulars. Japan’s Yuhi Sekiguchi was a superb fourth for the team in 2011 after winning the Japanese F3 title, but was a quieter 18th when he did the Masters at Zandvoort earlier this year. Dennis van de Laar moves across from Van Amersfoort, having suffered a last lap collision last year.

Fortec have struggled to keep their F3 line-up intact this year but found five drivers to take to Macau, led by the only ever-present driver in their 2013 campaign, Pipo Derani. The Brazilian finished an impressive sixth last year and has followed that up with a decent season, coming on particularly strong towards the end of the year and should be a top ten contender again this time. Will Buller had a disappointing start to the year with T-Sport and missed out on the British title after switching to Fortec, but did do well after joining the FR3.5 grid. Winner of the Formula BMW support race in Macau in 2009, he’s scored a best result of sixth in his three F3 starts since then, in 2011 with Fortec.

John Bryant-Meisner joined the team for the final two European weekends and did a promising job as he looks to step up full-time from German F3 next year. Fellow Swede (sort of) Tom Blomqvist has had a tough run to seventh in the European Championship as a sole entry with EuroInternational but will hope for a boost after returning to the team with which he won the Formula Renault UK title in 2010. Newly-crowned F3 Open champion Ed Jones completes Fortec’s quintet having driven for the team in Eurocup Formula Renault and contested the FIA F3 round at Hockenheim 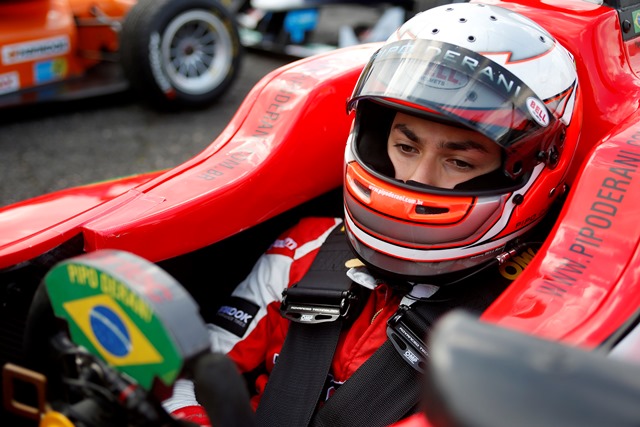 Another British team, Double R Racing, brings a four-car entry to Macau, lead by Kevin Korjus who should be fired up to do well after slipping from third to seventh in this year’s GP3 standings at the final event. Sun Zheng provides some Chinese interest and impressed on his way to the British F3 National Class title. Regular team-mates Antonio Giovinazzi and Sean Gelael make their Macau debuts, the former having scored a number of top ten finishes in the closing European Championship rounds.

Alexander Sims could be an underdog contender in T-Sport’s sole entry having taken five podiums from 12 races this year. Stefano Coletti returns to F3 to drive EuroInternational’s car, looking to bounce back after the disastrous second-half to his GP2 campaign that had begun so well. Plucky privateer Lucas Wolf is back with URD Rennsport after a first-lap retirement in 2012, while Nelson Mason, third in the F3 Open, lines up for Jo Zeller Racing.

Japanese entries have been disadvantaged by having to switch back to the outgoing engine specification after the domestic series adopted the new FIA powerplants this year. Yuichi Nakayama dominated the championship but TOM’S are not the force at Macau that they were when his compatriot Keisuke Kunimoto took an unfancied win in 2008. B-Max’s Katsumasa Chiyo finished third in the Japanese standings, winning twice at the final round in Nakayama’s absence.