Home Featured Analysis: Why McLaren are right to give Magnussen a race seat
FeaturesFormula 1 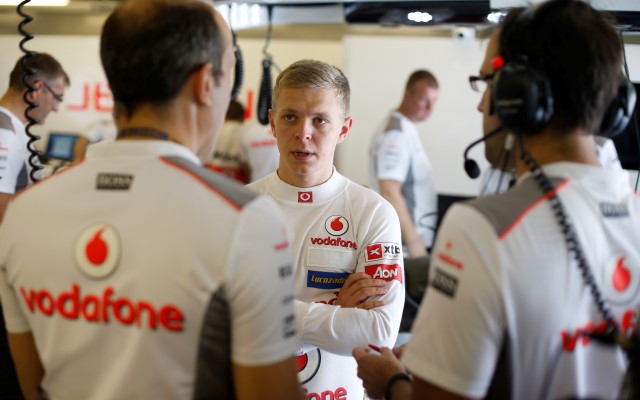 Like so many decisions in modern-day, scrutinised-on-Twitter-within-minutes Formula 1, the call that McLaren have made to promote Kevin Magnussen into a race seat for 2014 has polarised opinion.

As champions of young talent, it is probably no surprise that us at PaddockScout have supported the move. It’s not quite as straightforward as that though – we didn’t immediately jump to the defence of Red Bull when they made the shock decision to hand the Toro Rosso vacancy to Daniil Kvyat, for example.

For anybody who has felt the need to consult Magnussen’s CV in the aftermath of recent developments to try and gauge his abilities, it is maybe difficult to see what’s quite so special about him that he deserves an immediate elevation into a McLaren seat. Casting aside the somewhat obscure Danish Formula Ford, it took him until this year to win a major single-seater title, and even that was at his second attempt. It’s not the sort of resume that would earn him a place in the same league as Lewis Hamilton or even Nico Hulkenberg.

But this merely highlights how it’s too easy to judge a young driver by their achievements over their career. It would be impossible to predict how good Sebastian Vettel has become after he failed to win the F3 Euro Series title at the second try. It is a driver’s abilities that determines his potential, not results. Magnussen has long shown talent, and although it’s taken until now for him to deliver a title, the manner in which he has achieved that has been particularly impressive and proved he’s ready.

Perez hasn’t had enough of a chance to show what he can do in terms of results. He hasn’t performed too badly in the chances he has had. But this is about more than results. McLaren have worked with loads of good drivers. They have worked with Perez over 17 races. They will know whether he has the ultimate long term potential to be a great, and word is that the engineers haven’t been impressed.

They have been impressed though with the two days of testing that Magnussen has done. Two days isn’t enough to know whether he’s a future world champion but, taking their respective simulator work into account – an area where Magnussen has reportedly excelled, they feel that he has greater potential than Perez. In which case there’s no real point holding onto Perez for another year and keeping Magnussen on the subs bench.

12 months ago McLaren had to choose between two drivers they didn’t yet know, and like many they were drawn to Perez thanks to his three podiums, but in reality he wasn’t the most talented driver available. This time, they know Magnussen and they know Perez and they know which one has shown them more potential.

With so little F1 mileage under his belt there have to be question marks about how Magnussen will fare thrust into a McLaren next year. But this year he’s shown all the qualities that he needs; speed, consistency, maturity, confidence, calmness, determination, ability under pressure… I could go on.

He’s the most ready for F1 that any junior single-seater driver has been for some years, even if others have had more glittering careers-to-date. Credit to McLaren for realising that proven F1 podium finishers are not the answer, and giving a chance to somebody with the potential to do so much more.