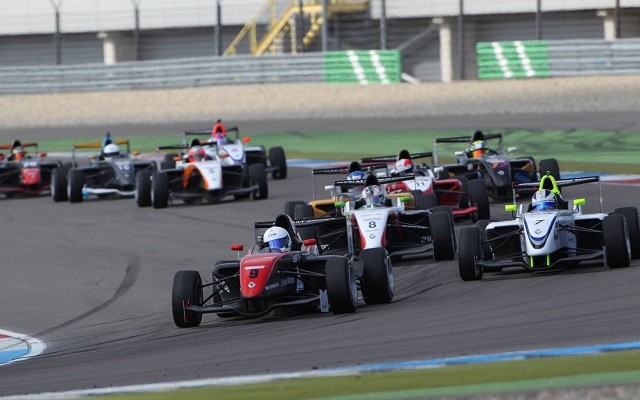 2013 saw Formula Renault 1.6 return to prominence as a viable entry-level category for junior single-seater hopefuls, with two successful championships launched under the NEC banner and in Sweden in support of the STCC respectively.

Neither series featured particularly sizable or consistent entry lists, but that didn’t prevent either from having extremely entertaining title contests between multiple talented drivers. In both FR1.6 NEC and FR1.6 Sweden, the title went down to the very last race.

Below we take a look at the key players and events in Formula Renault 1.6 in 2013. 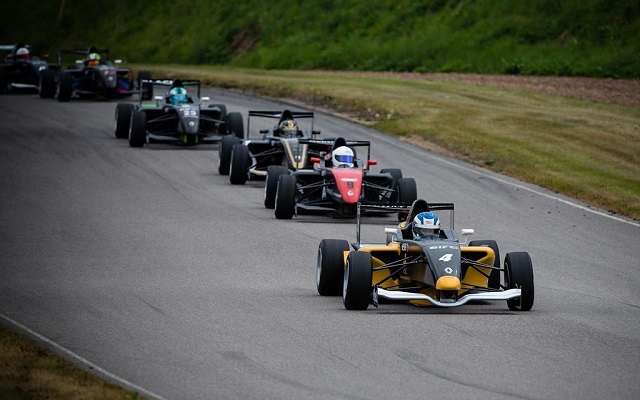 The 1.6 Sweden category was a bit under the radar in 2013, which was a massive shame, given that the championship produced one of the most exhilarating and unpredictable championship fights of the year.

The opening round at Knutstorp was dominated by Estonian youngster Martin Rump, who established an early lead with a double victory. However, it didn’t give him a particularly sizable cushion over the rest of the field, as local racer Kimmy Larson finished runner-up in both races.

As Rump had an average second round at Parnu, the advantage was now with the Swede, who won both races and took over in the lead. Simultaneously, Larsson’s compatriot Erik Johansson emerged as a frontrunner, taking his second and third podium of the four races, albeit lacking in points after a false start from pole and subsequent misunderstanding over a drive through led to a disqualification at Knutstorp.

Johansson showed the full exten of his class at Falkenberg, becoming the third double winner of the season, while Rump narrowly wrestled the lead back from Larsson. The Estonian gained serious momentum by that point and in the season’s only three-race round at Kinnekulle, he took two more wins and comfortable settled into the lead of the series.

But, as a clear leader emerged in Rump, the Estonian had a very tough outing at Ostersund, retiring from one race and picking up a drive through in another which amounted to no points. And, as luck would have it, it was a perfect outing for Johansson, who picked up another double and was now leading the Estonian in the standings. 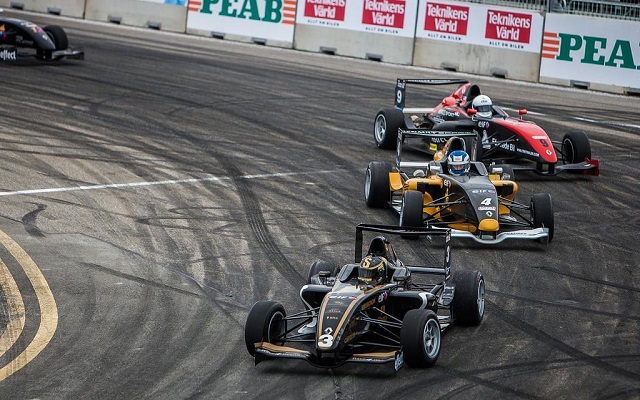 The rollercoaster nature of the season prevailed yet again in the penultimate round at Karlskoga, with Rump retiring in the first race due to a technical issue and Johansson’s second race sabotaged by an incident in the field. While Larsson continued to struggle for results in the second half and was no longer in realistic contention, he was suddenly overhauled by Swede Lukas Sundahl, whose campaign had a noticeably upward trend up to that point. His second victory of the year launched him right at the heels of the title battle ahead of the finale.

The tension reached a critical peak at Mantorp. The first race was won by Rump, while Johansson and Sundahl struggled, which allowed the Estonian to take the lead yet again. In the final race, however, Rump went off after starting from pole and, having finished in fifth, missed out on the title, two points behind the third-placed local hero Johansson. Sundahl settled for third, with Larsson taking fourth.

There was little separating Johansson and Rump but, in the end, it was the Swede’s consistency that played a decisive role. After the opener, he always managed the most out of the weekends when he was quick enough to do so and, when he lacked pace, he usually brought the car home in a decent finishing spot. However, his Estonian rival can also be plenty proud of the season – despite the rookie raggedness, he showed supreme pace and was reliably a force to be reckoned with. 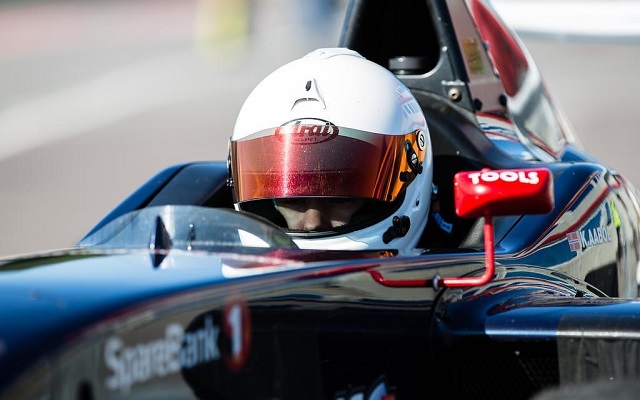 While the top four deservedly grabbed most of the headlines, there were plenty of other notable performers in the field. Paul Blomqvist was the best of the rest, with a very promising campaign that gained momentum along the way, culminating in his maiden victory at Karlskoga. Meanwhile, Norwegian Kevin Aabol was commendably consistent, failing to score on just two occasions and picking up two podium finishes.

Swedish racers Robert Svensson and Pontus Fredricsson made up the backbone of the championship’s impressive midfield, both managing a podium finish midway through their respective campaigns. Oliver Soderstrom and Rasmus Ericsson, meanwhile, did not break into the top three, but came close enough and completed solid seasons.

Finally, there were a number of eye-catching one-off guests. ADAC Formel Masters race winner Indy Dontje made an appearance and was on-pace with the frontrunners. However, he missed out on the podium, unlike fellow Dutchman and FR1.6 NEC frontrunner Janneau Esmeijer, who finished third in the opening round. Finally, Formula BMW Talent Cup winner Robin Hansson almost upstaged the entire title fight during the finale, impressively winning the second race of his very first 1.6 appearance. 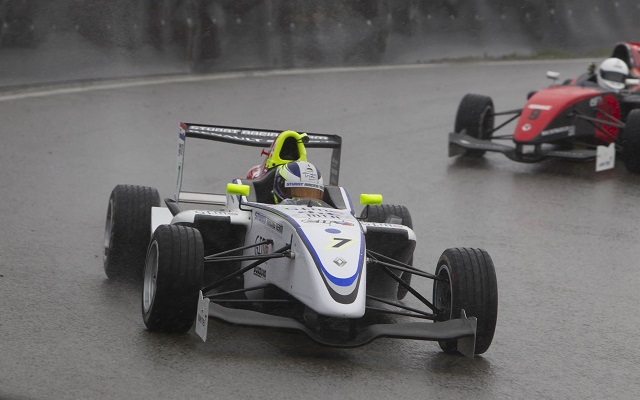 While the Formula Renault 1.6 NEC championship battle wasn’t quite as cluttered as the one seen in its Swedish counterpart, it was, perhaps, just as unpredictable, with very frequent lead changes in the standings throughout the year.

Again, Estonian Rump, who combined full-time campaigns in both 1.6 categories, was firmly at the forefront of the title battle. Dutchman Roy Geerts also established himself as a championship contender early on and, while Rump took pole for the opener, it was Geerts who prevailed in a hotly-contested first race. He went on to surrender the championship lead to Rump in race two, with Geerts missing out on the podium and the Estonian taking victory from pole.

The second round at Assen yielded a similar result, with Geerts and Rump taking a win each (neither did so from pole), now separated by just three points in the standings.

Round three at Zolder was a rather unusual affair for Rump, who had the 1.6 Sweden finale scheduled for the same weekend. After the resolution of the title battle in the other championship, he made the trip to partake in the 1.6 NEC round and was faced with starting from last on the grid, having been absent from qualifying.

Yet Geerts would not manage to fully capitalize on the opportunity. In race one, he was beaten by his charging compatriot Esmeijer, who didn’t have the fastest start to his campaign, but managed to launch himself into title contention with several strong results, culminating in the maiden win at Zolder.? In race two, Geerts and Esmeijer were engaged in a lengthy battle for the win and, on the final lap, they forced each other to run wide and allowed Rump to steal a surprise victory, having started last on the grid. 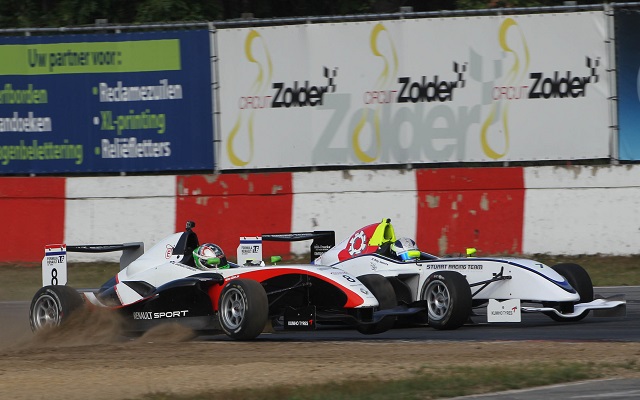 At the Nurburgring, Rump edged away in the title battle, winning both races ahead of Esmeijer and Geerts. However, the penultimate round, where the series revisited Zandvoort, saw Geerts make a sizable dent in Rump’s championship lead, as the Dutchman took a decisive victory and a second, which was given to him after he and multiple others crashed in heavy conditions and brought out the red flag.

As such, Rump entered the Assen finale six points clear of Geerts, with Esmeijer having an outside shot at the championship after a tough outing at Zandvoort. After race one, the battle seemed as good as over – Rump comfortably secured second, while Geerts struggled on his way to fifth.

However, in the best traditions of the genre, the final race turned out to be a thriller – the Estonian was suddenly hit with car issues, while Geerts found much-needed pace. As Rump went down the order, his Dutch rival went in the opposite direction. Geerts needed to win to take the title and fought his way up to second by the end of the race, settling in behind his race-leading teammate, who subsequently let him through. Despite Rump’s best efforts, he missed out on the title by one point. 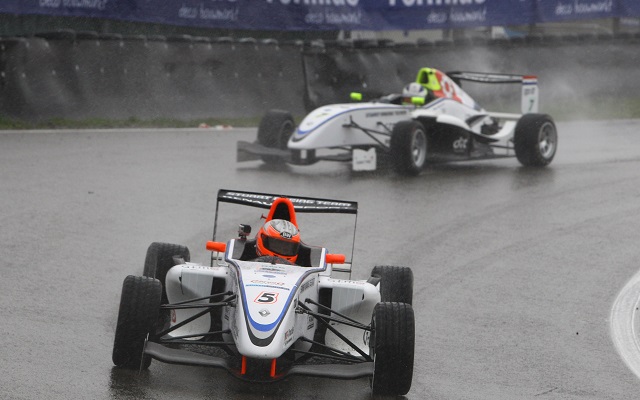 Having let Geerts through into first in the final race, Larry ten Voorde was instrumental in his compatriot’s championship, but that was not the only notable part of his season. The Dutchman took a while to get going, but became ever-present at the front in the later stages of the season. He took his first victory at Zandvoort and would’ve added another at Assen if not for the team tactics and, as such, came rather close to overtaking Esmeijer for third in the standings.

Blomqvist was another racer to do joint full-time campaigns in 1.6 categories and, just like his efforts in 1.6 Sweden, his NEC season followed a rather noticeable upward curve. Despite missing the Zolder round, he took fifth overall and secured his first win in the category in the first race of the final round.

Tommy van Erp enjoyed a decent rookie season, reliably picking up points in the midfield but not really managing standout results. As such, he’s finished with a sole podium, which he achieved in the opening round. Swedish racers Fredricsson and Sundahl had similar campaigns, with the former taking double pole at for the Assen finale and the latter managing to notch a podium finish during one of his appearances. Finally, Patricio O’Ward joined the field midway through the season and came in fourth on two separate occasions, racking up a solid points haul overall.

None of the one-off guests managed to break into the top three on their appearances, but Wouter Boerekamps and Jan Schwitter notably came the closest, with best finishes of fifth and fourth respectively. 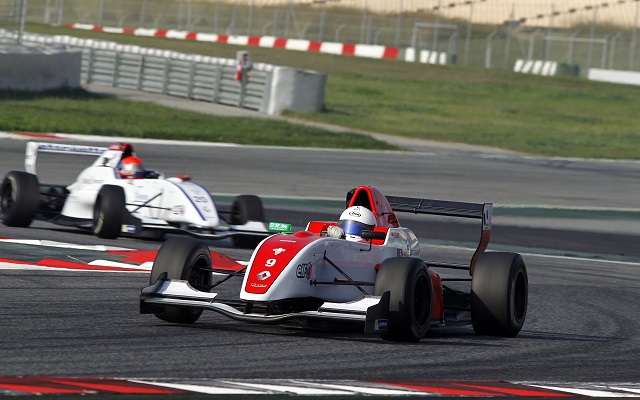 1.6 prodigy Rump recently announced that he secured a well-deserved deal to race with British squad Fortec in the Eurocup Formula Renault 2.0 in 2014.

As for the champions, Geerts appeared in private testing with Manor MP in 2.0 machinery, while Johansson tested with Koiranen in the Eurocup rookie test and recently tried out Performance Racing’s German F3 car.

The rookie test also saw Sundahl get an opportunity with Jenzer and Hansson – with Fortec.

While the exact opportunities for most 1.6 graduates are unclear, it is worth noting that there have been strong rumours of several 1.6 squads joining the 2.0 NEC field, which could create a rather handy link for those who impressed in the new categories of this year.