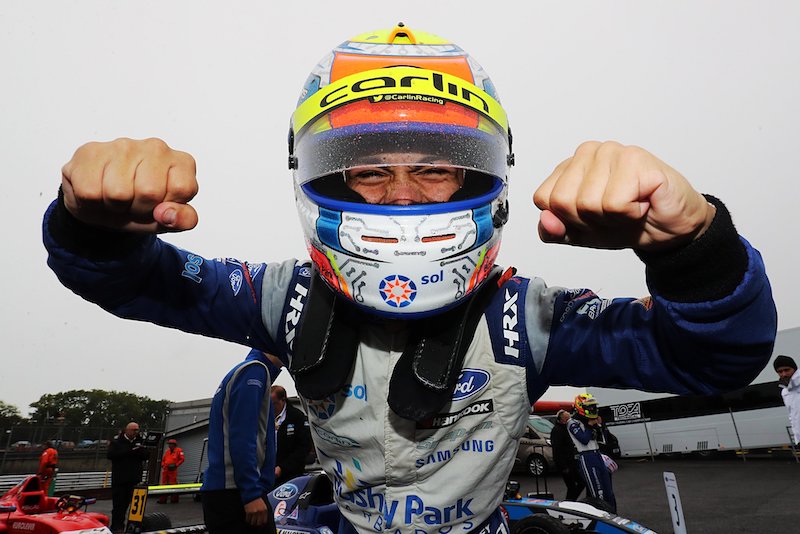 Zane Maloney has won the 2019 British Formula 4 championship with victory in the final race of the season.

Maloney took Carlin?s fourth drivers? title in the championship, completing their 100% win streak in the series.

His only championship rival, Sebastian Alvarez, was forced to retire with a mechanical issue midway through the race. Alvarez, who had been running at the back end of the top 10, pulled to the side of the track with the rear of his Double R Racing run car on fire.

As Maloney came into the season finale five points behind Alvarez, he still needed to finish seventh or higher in order to take the title.

Maloney had stormed through into second off the line, behind Double R Racing?s Louis Foster.

Foster put up a strong fight, but Maloney was able to find a way past near the mid-point of the race. Foster then ran wide through the gravel, giving Maloney some breathing room, but Alvarez?s retirement promoted a safety car and reduced the gap to nothing.

Luke Browning was promoted to second after Foster?s excursion. He tried to stick with Maloney on the restart but couldn?t stay close enough to make a move and settled for second.

Carter Williams pulled into the pits as the field formed up ahead of the green flag lap, switching from wet tyres to slicks. As the only driver on slicks on a drying track, Williams flew up through the order. He had moved up into the top 10 by the time the safety car came into the pits and spent the second half of the race picking off driver after driver.

Williams was looking for a way past Alex Connor for the final podium position on the final lap of the race, but a wide moment sent the JHR Developments driver into a spin and he dropped down the order.

Connor came home third ahead of Josh Skelton and Bart Horsten. After his wide moment early in the race, Foster took sixth.

Mariano Martinez held onto seventh after a race long battle with Tommy Foster.