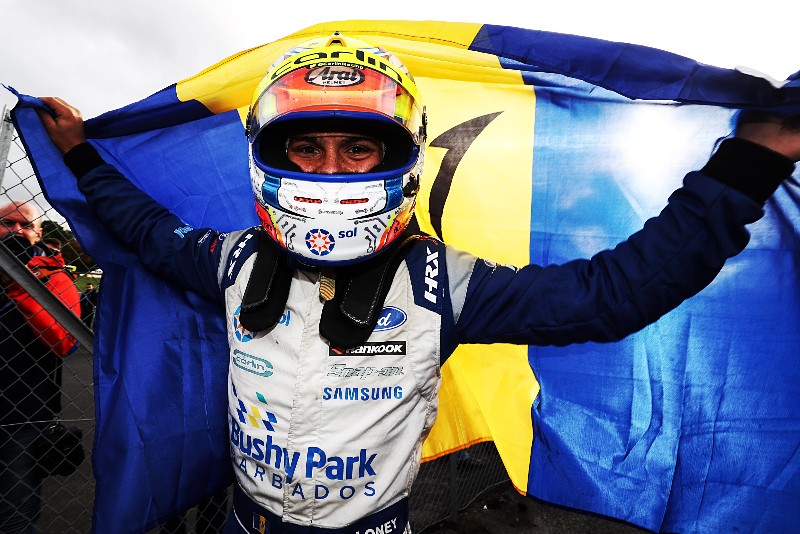 British Formula 4 champion Zane Maloney claims he didn?t feel the pressure ahead of the title-deciding final race of the season, despite entering the finale five points behind Sebastian Alvarez.

Maloney and Alvarez headed into the Brands Hatch weekend tied on points, but a victory and fourth place finish for Alvarez ? compared to a win and a fifth for Maloney ? put the latter at a disadvantage ahead of race three.

Carlin driver Maloney came through to win the race after a ?risky? move to pass Double R Racing’s Louis Foster for the lead, whose team-mate Alvarez retired after his car set on fire.

?There was no pressure at all,? Maloney told Formula Scout. ?Once I got on the formation lap, there was none at all.

?I knew I was going to win that race in my head. Things can happen to make me not, and you have to do the right job to win, but in my head I was winning that race and when you believe so much in the car, when you?re in the car you perform the best possible.

?But when you get out the car it?s back to being humble.

?The support has been amazing also, so I think that?s taken a bit of pressure off me actually. I just try my best all the time.?

Before the race, Maloney said he would continue to push for the victory even if it wasn?t necessary, which was the case when he battled Foster for the lead.

?I was in second and I knew I was going to win the title because, unfortunately, Sebastian had a problem with his engine.I wouldn?t have liked that to happen to me. It happens in motorsport, but I?m sure he?ll come back stronger.

?I was in second and I wanted to win and go out with the championship. I didn?t want to come second to win the title. I pushed my heart out to get past Louis and we did it in fine fashion. It was a bit of a risky move, but we?ve done it and now it?s time to celebrate.?

Maloney added that he still feels he has a lot to work on, but was overall pleased with his ?amazing? season.

?We?re working on [2020] now, testing a lot of different things. It?s definitely not 100% or anything yet, but we?ll be doing something a step or so above this and there?ll hopefully be some good news soon.?