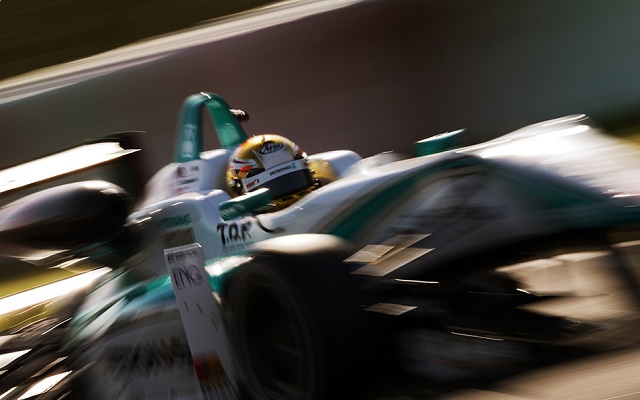 Having started the day 11 points off first place in the standings, he leaves the track as the new championship leader.

Yamashita started the first race of the day from pole and chopped across Mitsunori Takaboshi off the line to keep the lead.

He needed a few laps to shake off the B-Max driver but eventually established a somewhat comfortable one-second advantage, going on to claim his first win of the season.

Yamashita’s teammate Nick Cassidy couldn’t keep up with the duo and had to settle for a third-place finish, six seconds behind.

The second and final race of the day saw Cassidy lead a TOM’S front row on the grid.

The Kiwi got a decent enough getaway, but couldn’t cover Yamashita off the line, his teammate taking the inside into turn one.

Cassidy went into turn one in second, but Fukuzumi blasted past him on the outside line to steal the spot.

The top three positions would not change for the rest of the day, with Yamashita escaping into the distance and Fukuzumi managing the gap to Cassidy.

Takaboshi was fourth, ahead of Takahashi and Ordonez.

Yamashita now leads the standings at 34 points, but his main rivals Cassidy and Takaboshi are right behind at 33 as the series heads to Aida.

In the National Class, Ryo Ogawa won both races and has significantly extended his lead in the points over Ai Miura.