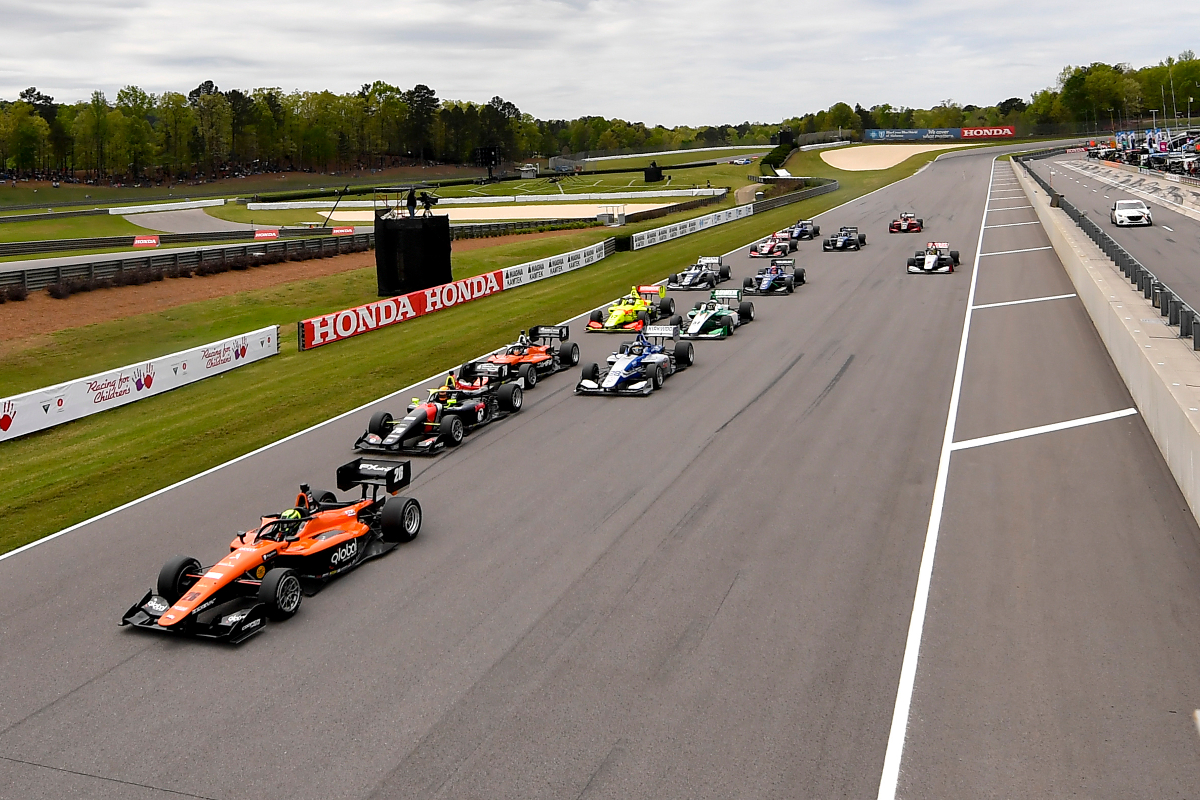 While Indy Pro 2000 last year proved more than ever that you can have incredibly close multi-car battles but still maintain high quality driving standards, Indy Lights the year before showed that you only needed two cars to hold a great race.

In 2020 some predicted it wouldn’t even come to that as Andretti Autosport’s Kyle Kirkwood was hotly topped to take a fifth successive junior single-seater title in dominant style, but the single free practice session that took place on the streets of St. Petersburg before the season was put on hiatus and then cancelled entirely presented a very different competitive picture that, surprisingly, seems to have continued straight on into the series’ return at Barber Motorsports Park last weekend.

HMD Motorsports’ David Malukas set the pace in that St. Petersburg session, and he was the driver to beat at Barber too.

In pre-season testing at the circuit he headed Linus Lundqvist, whose car is co-run by Global Racing Group, by 0.0437 seconds. Lundqvist struck back in practice at the season opener by 0.1942s, and Malukas looked favourite for pole early in the first qualifying session before Lundqvist snuck ahead by 0.1666s at the end. Malukas mastered the second qualifying by 0.0221s but wasn’t able to continue his fight into the first race after very light contact with Kirkwood sent him into the barriers after just one corner. In his absence, Lundqvist was free to take a dominant victory on his debut ahead of team-mate Benjamin Pedersen. Come race two the pendulum swung back, with Malukas taking an even more crushing win.

So a surface level view was that HMD was comfortably the fastest team at Barber, which it had tested at privately during the series’ hiatus, built on a single-lap pace advantage at a circuit where track position was going to be crucial as a result of the push-to-pass overtaking system being out of use due to software glitches. The drivers further down the order did have the pace to fight closer to the HMD stars up front, but were often bottled up behind one slower car ahead that couldn’t be passed. 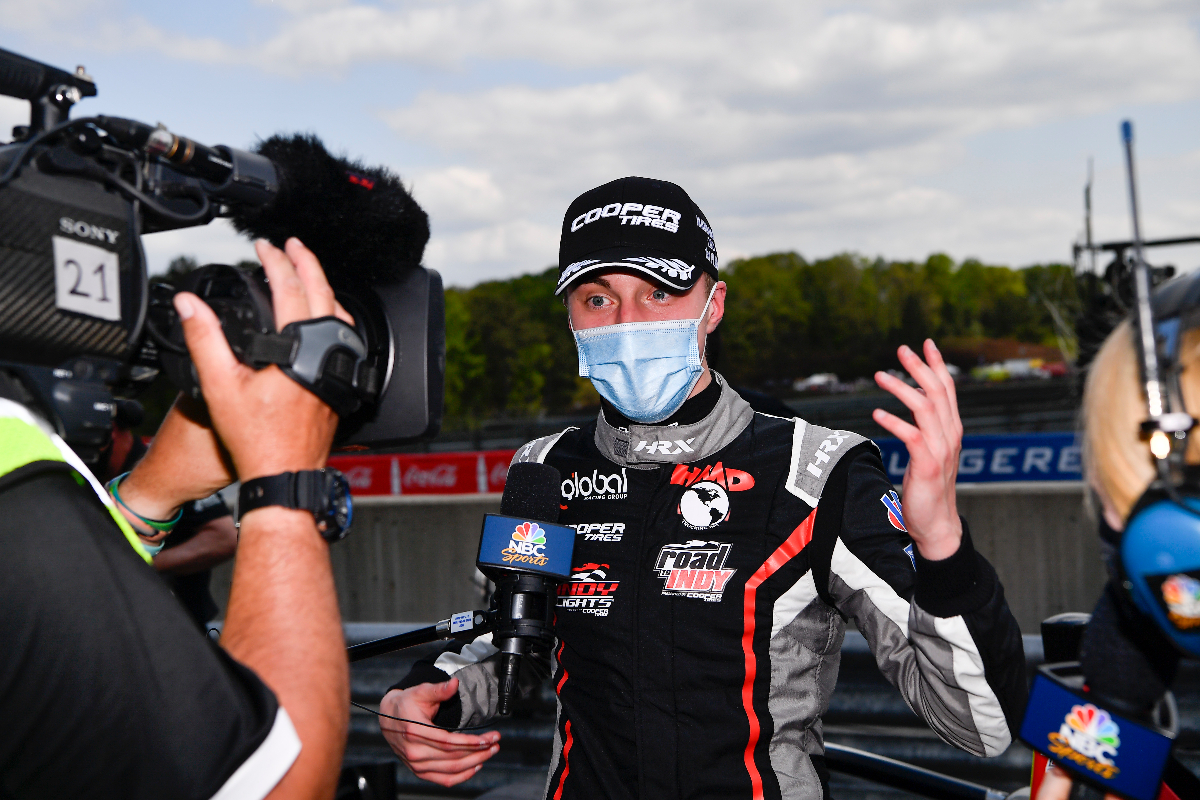 But Malukas’s own comments on his domination, in addition to what occurred to the cars behind in race two (which ran to 35 laps compared to race one’s 30), proved it went way beyond that. Former IP2000 star Parker Thompson and new Road to Indy TV presenter asked Malukas how his Cooper tyres handled over the distance after winning by 6.3895s and taking fastest lap.

“Unbelievable,” Malukas responded enthusiastically. “I mean this track, the large elevation changes, it’s hard on the tyres. You’ve got a lot of long, long corners, a lot of pressure on these tyres. They lasted easily. At the end there, I was still dong the fastest times of the whole run. The car felt amazing. I think it was the best that it’s ever felt. It felt like it was qualifying.”

Malukas’s fastest lap was set on lap 25, before his engineer came on the radio telling him to preserve his rubber. Each driver maintains one of their three sets of tyres from the weekend to carry over into the next round and Malukas had already punished the set he used only briefly in race one. However, after that message he still grew his race lead by some amount. The non-HMD drivers in the top half only got to show their true pace in the final laps, having spent almost the entire race stuck in a train behind Andretti’s Robert Megennis in third place until his front-left tyre went down on lap 29.

That same fate hit his team-mate Danial Frost, and while Malukas was locking up his own tyres after that it was because he was pushing again on low fuel and knew the sidewall of his front-left and rear-right tyres could still absolutely handle it.

Off-season work and the quality of the people around him was credited by Malukas for the improvement at HMD, which during the hiatus period hired ex-IndyCar personnel and those who would have otherwise been without a job when one of the series’ top teams Belardi Auto Racing closed its doors during the first peak of the COVID-19 pandemic in the United States.

Malukas’s race one retirement means it’s Lundqvist who leads the points, and the team may have acquired some tricks from him as the Swede was also ominously comfortable at pushing late in races – and posting very consistent laptimes – in Formula Regional Americas in 2020 when he won 15 of 17 races and Malukas was title runner-up by winning the other two. 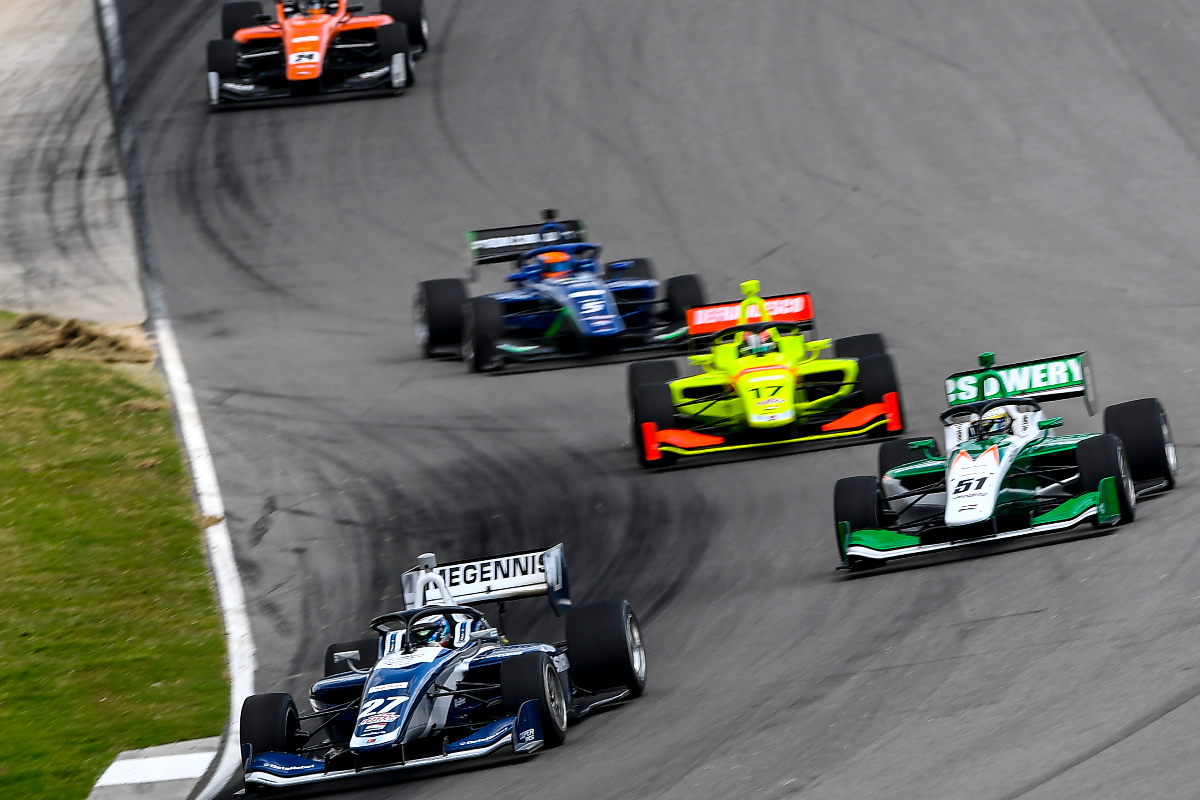 But this dominant picture breaks when you realise how unique the Barber round was. For once it was a season opener that teams could prepare for by visiting in advance, given Indy Lights usually starts in St. Petersburg, and true road courses like Barber only form half of the calendar. The rest is street circuits, one oval and Indianapolis Motor Speedway’s road course.

P2P will also be back in use in St. Petersburg this weekend if it is glitch-free in practice, which will certainly come into play at that circuit’s long run to turn one, and of course there will be one extra set of (used) tyres at each round going forward.

Indy Lights’ racing was as close as ever on its return, even if the headlines were taken by two dominant wins, and that was seen on a far larger scale than in the past with the 13-car grid being the biggest in some years. Paddock rumours suggest a 14th driver is on their way.

There’s no clear favourite so far, especially with a system that hands out points to non-finishers, and on one-lap pace Andretti was close in qualifying and even closer in the races when its drivers weren’t in traffic.

Oh, and the halo made its series debut too. But by race one that barely registered, and no drivers made note of it either.