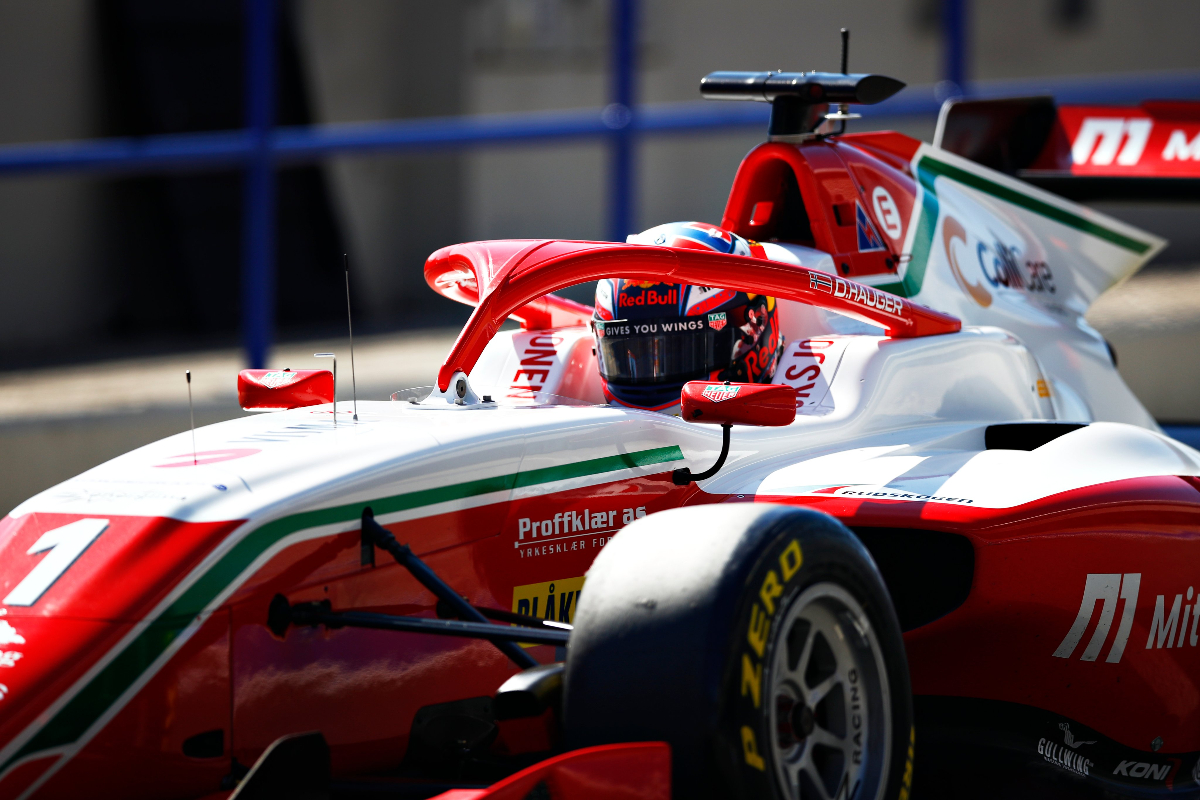 The Hungaroring is an outlier on the FIA Formula 3 Championship calendar, but an in-season test at Jerez actually gives teams an opportunity to prepare for the twisty circuit, and provides clues on who will be on top

The COVID-19 pandemic didn’t tear up the calendar this year like it did in 2020 for the FIA Formula 3 Championship, but it did change the pre-season schedule and led to an in-season test taking place at Jerez in mid-May. Most of the attention was still on the opening round at Barcelona that took place a few days prior once cars were on track at Jerez, and even then nobody was shouting about the laptimes too much because Jerez isn’t a track that is raced on above Formula 4.

However, the cars are set up in a very similar way to the Hungaroring, and the heat there also makes it a useful track to understand how Pirelli’s tyres perform and need to be managed. It’s a great circuit to run on for rookies who are aiming to increase their confidence in the Dallara F3 2019 car.

The two corners in particular where drivers can find out how good (or bad) their tyre management skills are at present are turns five and eight. Both are lengthy continious apex corners which put a lot of load on the tyres. If a driver is struggling with traction in the final sector over a long run (and even on a qualifying run), then it highlights a lot of what has taken place at the wheel in the preceding corners. In that way it’s much like the Hungaroring, where surface temperature of the tyres is the big worry with so many corners on the throttle.

What this also means is, beyond twisty tracks usually making overtaking harder and therefore putting an additional onus on qualifying anyway, is that single-lap pace is actually pretty representative of who’s going to be best over a race distance.

So to be only the 24th fastest out of 29 on single-lap pace might be of worry for Prema’s Dennis Hauger.

But the championship leader had a very productive two days in the south of Spain. 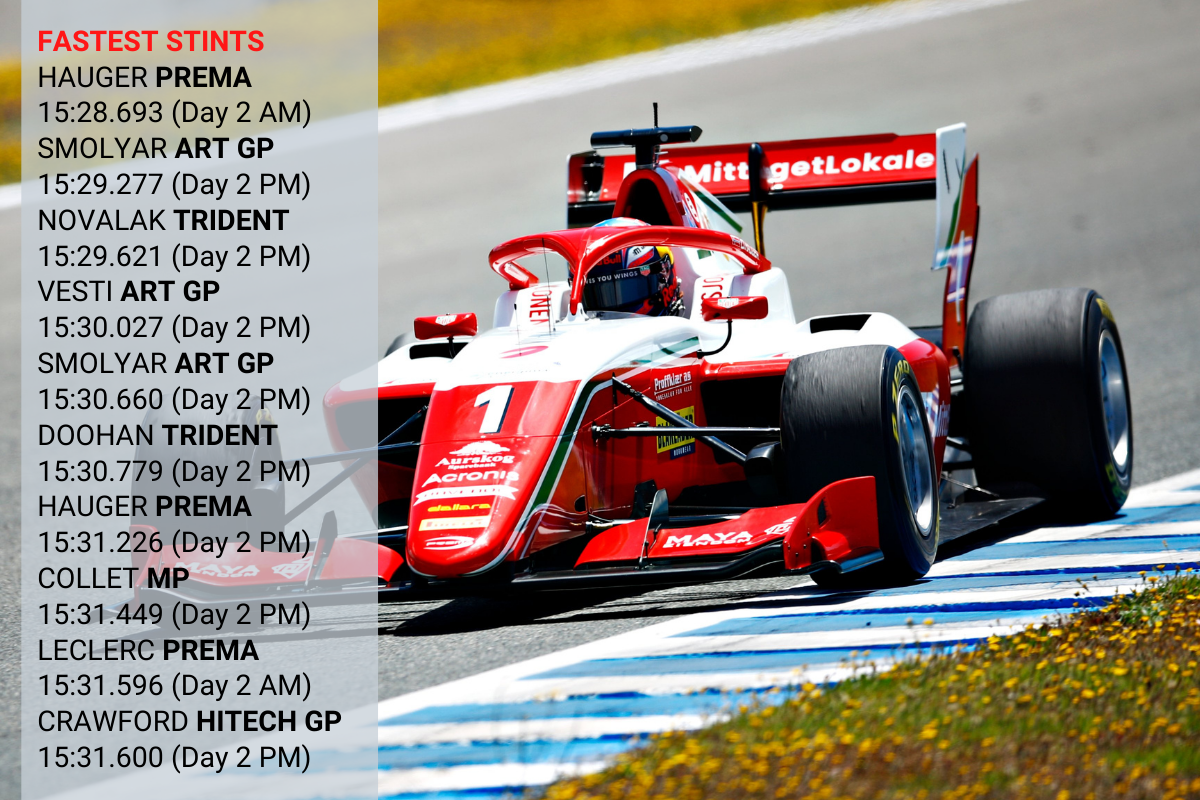 He and his team-mates were the only drivers to embark on long runs in the first session of the test, and therefore had a greater variety of conditions than their rivals to observe rear tyre degradation.

ART Grand Prix and HWA Racelab were among the teams that ran long in the cooler conditions of the afternoon, but Prema used this time to look at hooking sectors together for laptime gain. When Hauger returned to the track the next day and started his run plan with a 14-lap stint, he was joined by only his team-mates, the HWA drivers and Trident’s day one pacesetter Jack Doohan.

Arthur Leclerc got fairly close to team-mate Hauger’s pace on the same strategy, and the Ferrari Formula 1 junior is not known for his qualifying form, but Hauger’s advantage to the best non-Prema car, Doohan, was 0.550 seconds per lap.

Doohan improved in the afternoon and actually outpaced Hauger over a stint in that session, with Hauger being lucky to avoid traffic on a short 11-lap run, but comparing the 24-lap stint that led to Doohan’s personal best to Hauger’s benchmark from the morning still leaves a deficit of 0.209 seconds.

Take that kind of pace advantage (in percentage form) to the Hungaroring over a race run, and that’s not enough to really help in the two sprint races that start the weekend. You need to be a third of a second faster or more than the car ahead to consider overtaking at the Hungarian track, and if Hauger qualifies ahead of title rival Doohan then he can expect a tricky race one behind him.

However just 1.737s covered the grid on race pace at Jerez, so Hauger’s margin actually makes him the most likely to be in a position to pass without waiting for mistakes from rivals if a similar advantage on laptimes holds this weekend.

The usual contenders for podium honours this season were also the drivers at the front in testing, so it looks like the fourth round of the season could very much follow the same pattern as the first three. 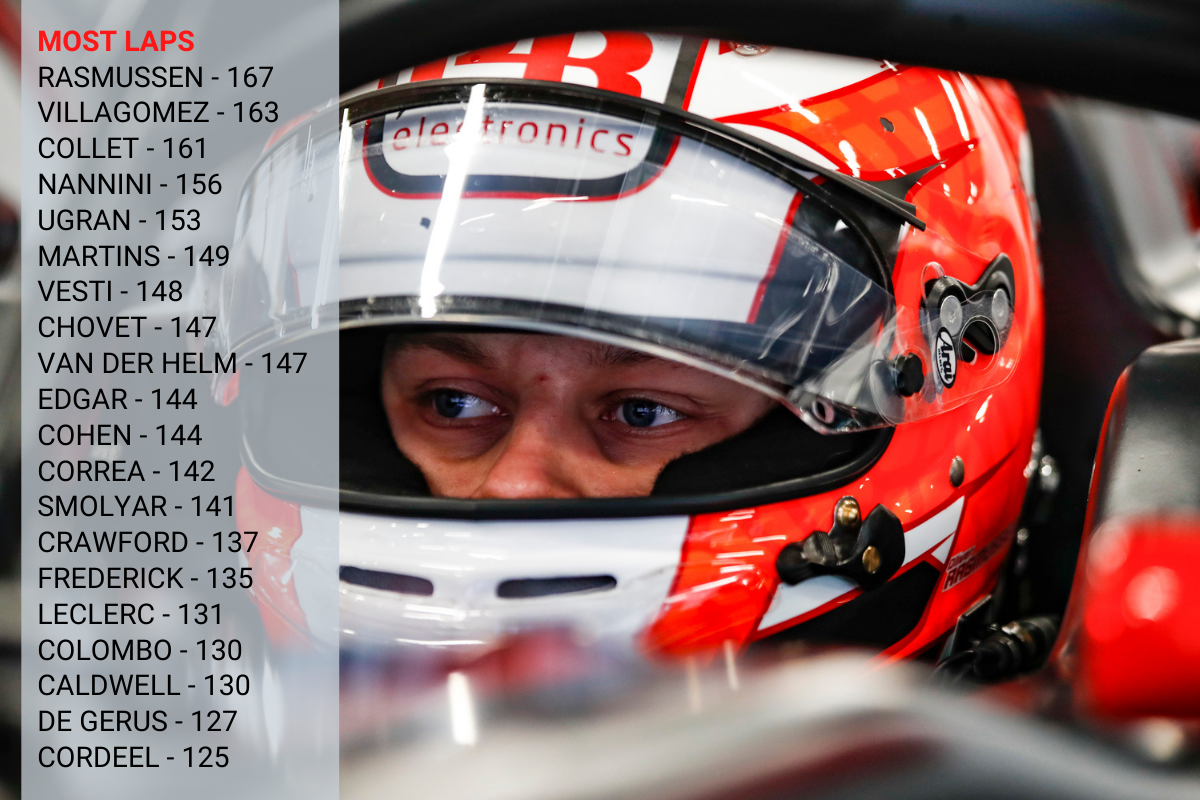 One peculiar factor to take into account is that Leclerc has a three-place grid penalty hanging over his head. If he tops qualifying then he will start 15th, but if he qualifies 12th then he will line up fourth for the reversed-grid race one. Or if he’s 27th fastest like he was at Jerez, then he will start plum last. The chance of Sunday morning rain may be a saving grace there.

Johnathan Hoggard really impressed in last year’s post-season Jerez test, but missed this year’s trip, and a Jenzer Motorsport team that is on the rise could make him a dark horse for a sprint race podium. His team-mate Calan Williams similarly made a mark at the circuit in 2020, and has had a decent start to this season that’s included the first European racing podium for the 2017 Australian F3 champion.

Beyond those two and the established frontrunners, the next driver to watch is the returning Jake Hughes.

The Mercedes F1 and Formula E simulator driver sits second only to fellow Mercedes-tied driver Frederik Vesti in the all-time FIA F3 Championship wins list, and already has five seasons of F3-level experience under his belt. Despite vowing not to return to the category, he got offered a seat at Carlin for this weekend to stand in for the injured Kaylen Frederick.

Across the first two FIA F3 seasons there has been little to cheer about for Carlin, but the Hungaroring is a place the team has performed better at compared to its opposition than at other circuits and that should give Hughes confidence of scoring points on asphalt he has had three F3 podiums at previously. More importantly, he is a set of experienced eyes that can look at what the British team is doing in and out of the car and suggest ways it can start fighting the likes of Prema and Trident.

Hughes likes a ‘pointy’ car, which can be a strong style to have a circuit where you can overlap throttle and brake at many of the direction changes. But even after two years in the series he admitted he never fully got the hang of Pirelli’s tyres, and they’ve changed slightly again for 2021. Could he repeat Ben Barnicoat’s 2020 cameo heroics? 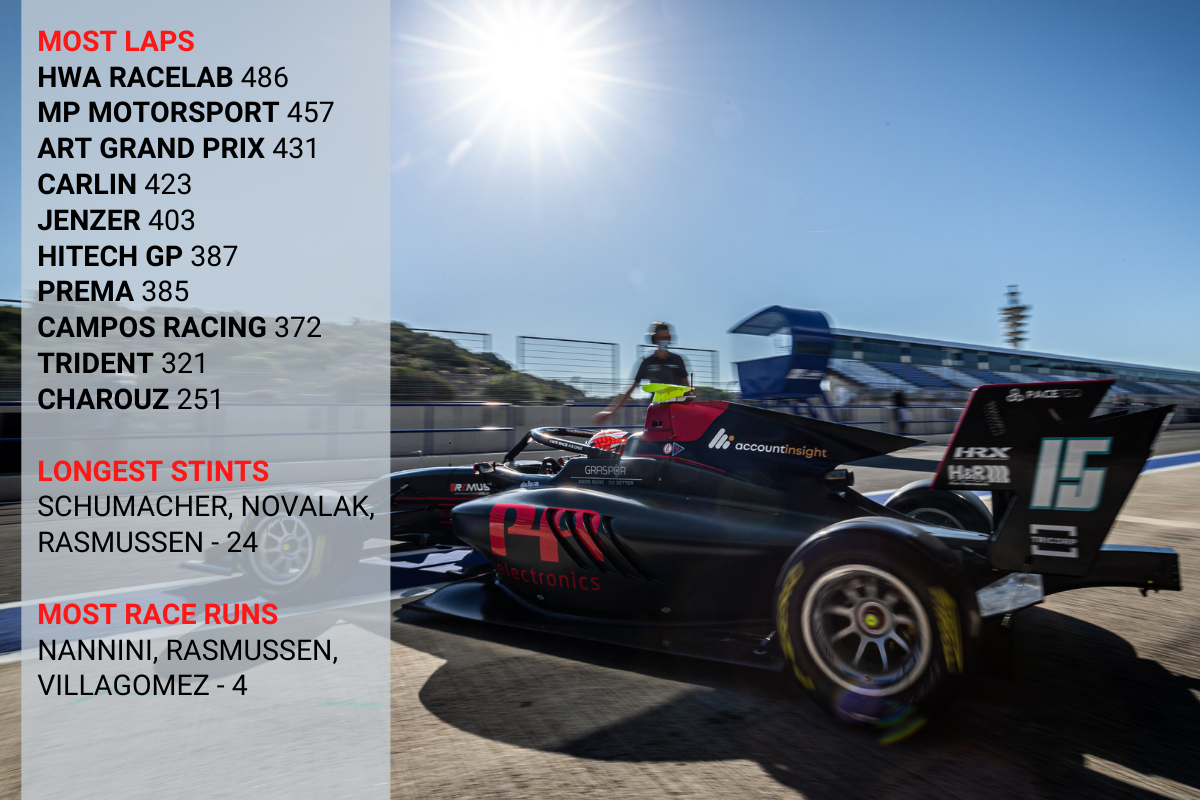