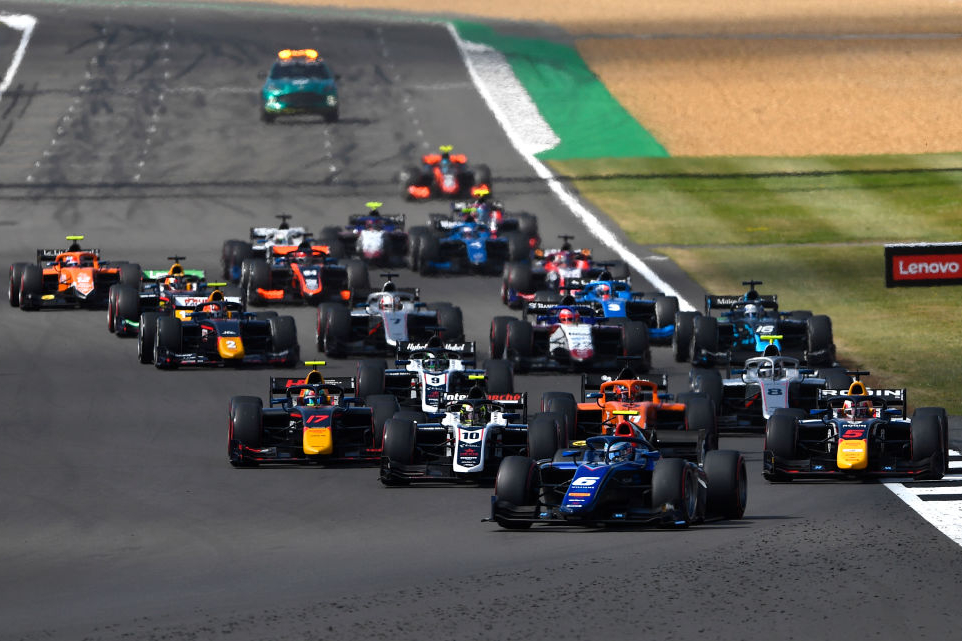 The British Grand Prix was packed with drama, and its support races were no different. In this week’s Formula Scout Podcast we discussed the action at Silverstone and the main talking points going forward

Formula 2 has reached the halfway point of its season after 14 races, while the supporting FIA Formula 3 Championship has kicked back into action after a break of a month to remind everyone of how much talent is sitting below Formula 1 right now.

You can listen to our thoughts on how those talents did at Silverstone here, find our podcast on Breaker, Google Podcasts, Overcast, Pocket Casts, RadioPublic, Castbox, Apple Podcasts and Spotify, or read a summary of the key points below:

Is it time to question Nissany’s place on the F2 grid?

Unlike F1, which is a professional series for paid drivers, F2 is almost always a series for aspiring racers bringing budget to drive for teams whose business aim is to race and their business model is to charge drivers for being in one of their cars.

And from a pure business case, Roy Nissany merits his place on the F2 grid. He has the money required, which helps pay the wages of the DAMS team he drives for, he also has enough ability to be on the pace in the Dallara F2 2018. Other drivers on the F2 grid have defended him on that when his place in the series, and more so the young driver development programme of the Williams F1 team, has been brought into question. 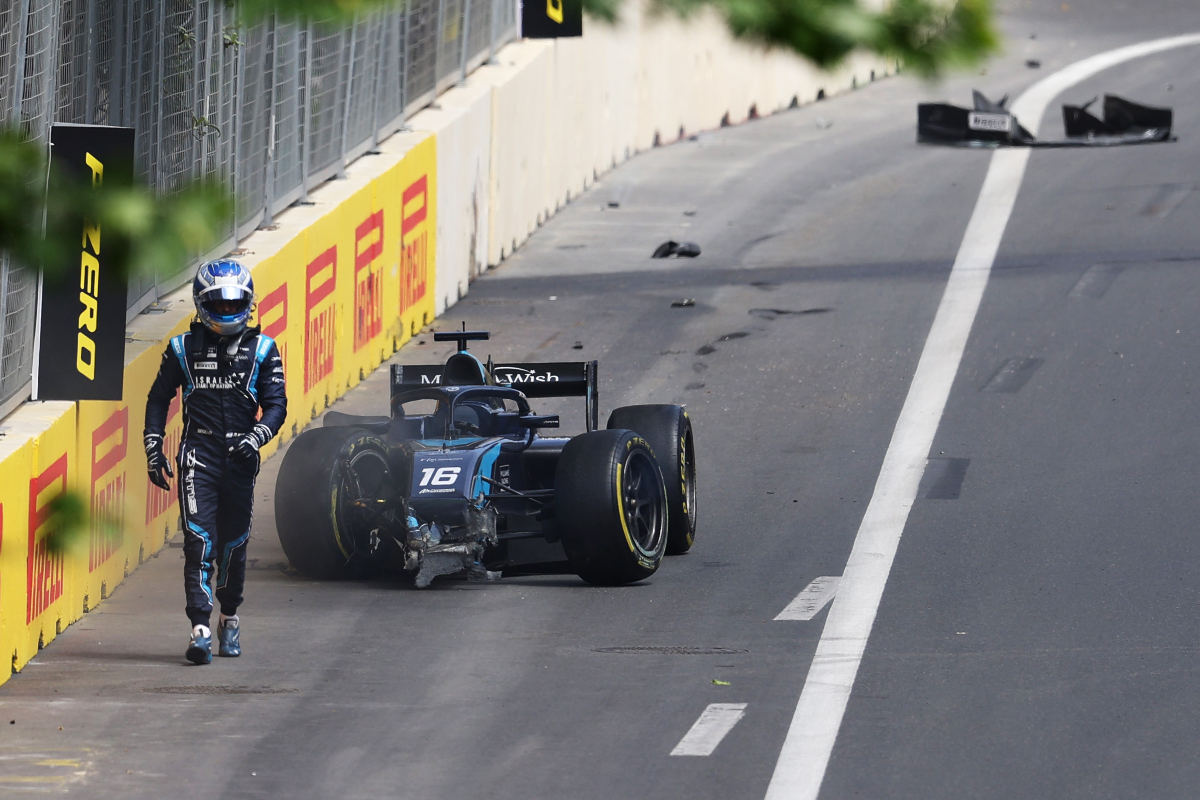 But when it comes to actual wheel-to-wheel racing, other junior single-seater racers have not held back from publicly criticising Nissany and his involvement in the incidents he has frequently found himself in.

Last weekend “luckily the halo was there for me” as an opening lap battle in the feature race ended with Dennis Hauger being forced off track by Nissany and then launching over a sausage kerb into Nissany’s car. The floor of Hauger’s car went through the gap in the halo, but the wraparound part prevented the whole car from ploughing into Nissany’s head.

Nissany said the scary incident “is part of racing”, but stewards did not look upon it lightly and handed him a big penalty for the next round.

The Israeli is now 27 years old, has scored points only 10 times in three-and-a-half F2 seasons and therefore has the slimmest of F1 chances despite his Williams connections, and keeps making mistakes that drivers which only debuted in cars once he was already in F2 do not.

As Nissany thankfully escaped the crash injury-free he will be able to race at the Red Bull Ring this weekend, but should he?

F3 championship leader Martins was only able to go 11th fastest in qualifying, but that put him on the front row of the reversed grid for the sprint race. He snatched the lead on the opening lap, then led all the way until the penultimate lap when fellow Frenchman Isack Hadjar swept around his outside after two laps of trying.

“A bit frustrated because you lead the race for three quarters or even until the last two laps. So just a bit of frustration, but after that, I just see that it’s important that we take the points it’s nine points so it’s just one less than the victory,” Martins said. 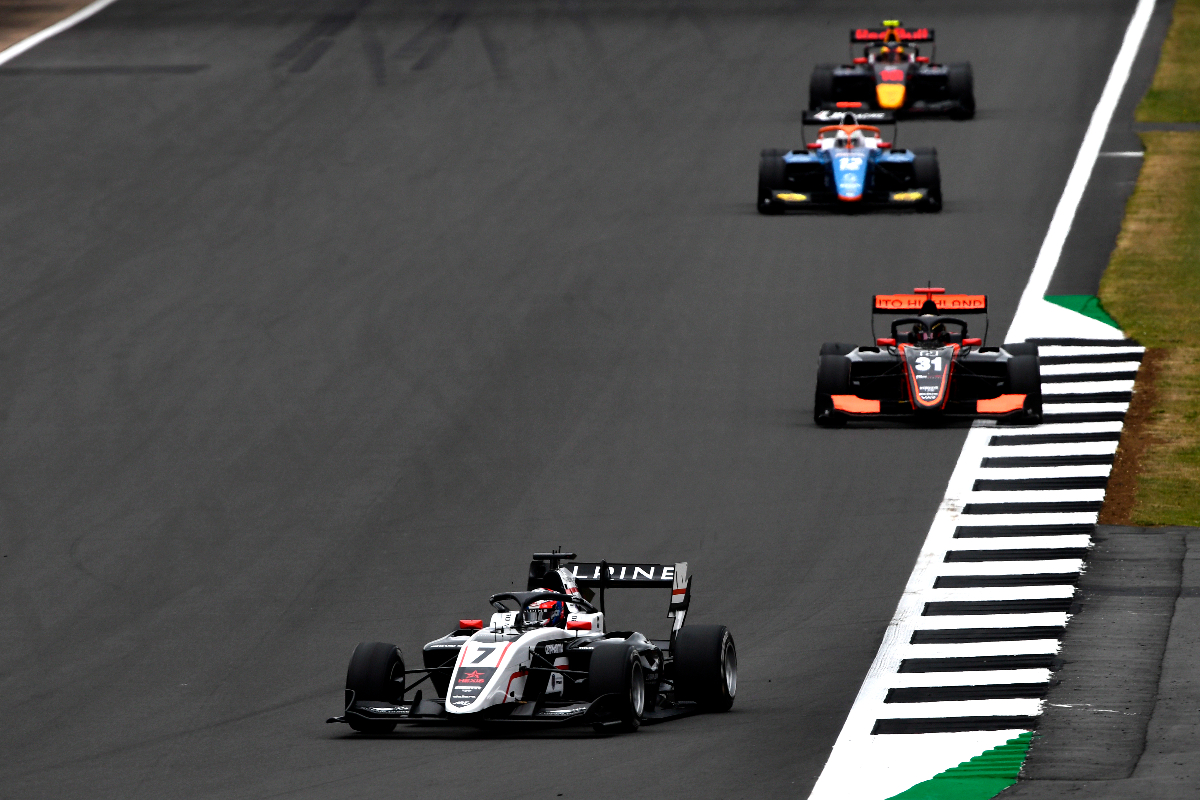 “Then we need to understand what happened, what we have seen today, and what was the feeling in the car, to improve it for tomorrow.”

He expanded further on his suffering, which he wasn’t alone in as his team-mates Juan Manuel Correa and Gregoire Saucy were off the pace through the weekend.

“It was just difficult from lap one to the end. Not so much tyre deg, like Isack said, but I was struggling with the front, and rotating the car and stopping it to take the apexes in the slow and medium corners. We need to work on that to improve the overall pace of the race.”

Martins rose from 11th to seventh in the feature race, maintaining his pre-event six-point lead at the top of the table.

In the press conference after the sprint race, Martins was asked if his pace issue in the race had been the same as qualifying.

“In free practice we were looking really strong. I think we went into qualifying maybe with not the good mindset. I would say we struggled from lap one in quali and then we couldn’t come back in the end on the last lap and do a proper lap. Even though I think I did a little mistake which costed me around the top six. But when the car is difficult, it’s always easier to make mistakes.

“But in the end, I think we were struggling the same way as yesterday in quali. I was struggling to find grip actually on the car. It’s not only one axle, it’s the overall grip which is I think not there. But we need to get points. I would say it’s a low moment in the season and we need to maximise that, and it’s how we will get the championship.” 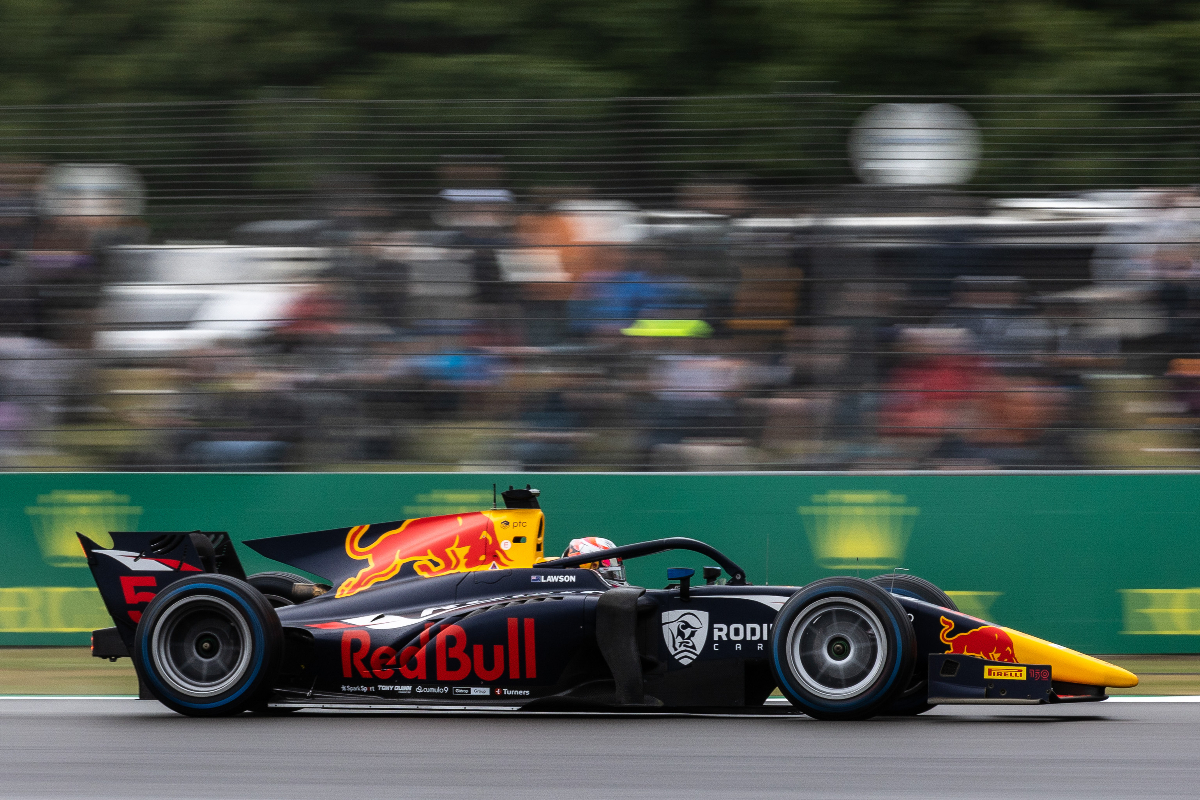 That’s what Liam Lawson said when Formula Scout asked if he could give a mark for his first half of the season.

Although Lawson finished third, second and then first in the opening three races of 2022, he then went seven races with a finishing position no higher than eighth before returning to the podium in the Baku feature race. By that point it was too late for his 2023 F1 ambitions, as Red Bull’s driver advisor Dr Helmut Marko was commenting that the brand’s AlphaTauri team would likely retain its current line-up.

Of course Yuki Tsunoda could fall into an awful run of form, and he did send his team-mate Pierre Gasly into retirement at the British GP with a collision, but Lawson hasn’t done enough to stake his claim for his seat despite becoming Red Bull Racing’s reserve driver at Silverstone after Juri Vips’ dismissal from the team.

In his first race with even more F1 attention than usual, he lost his front wing and finished dead last after a pitstop. At least on Sunday he then turned fifth on the grid into third place, his fifth podium lifting him from 10th to fifth in the standings.

“A good result honestly, it’s just nice to finally score some points,” he admitted in the post-race press conference. “We haven’t really scored properly in a feature race since Bahrain so it’s nice to finally do that and we keep pushing forwards. The pace has been good for a long time now, so if we can keep that up then all positives.

“[Fifth] is an improvement from 10th where we were, but obviously we want to be further up so we keep going in this direction and we’ll see where we end up.”

First and third for Logan Sargeant and Lawson in the feature marked Carlin’s first double podium in F2 since the 2020 season finale, and brings it up from fifth to third in the teams’ standings. 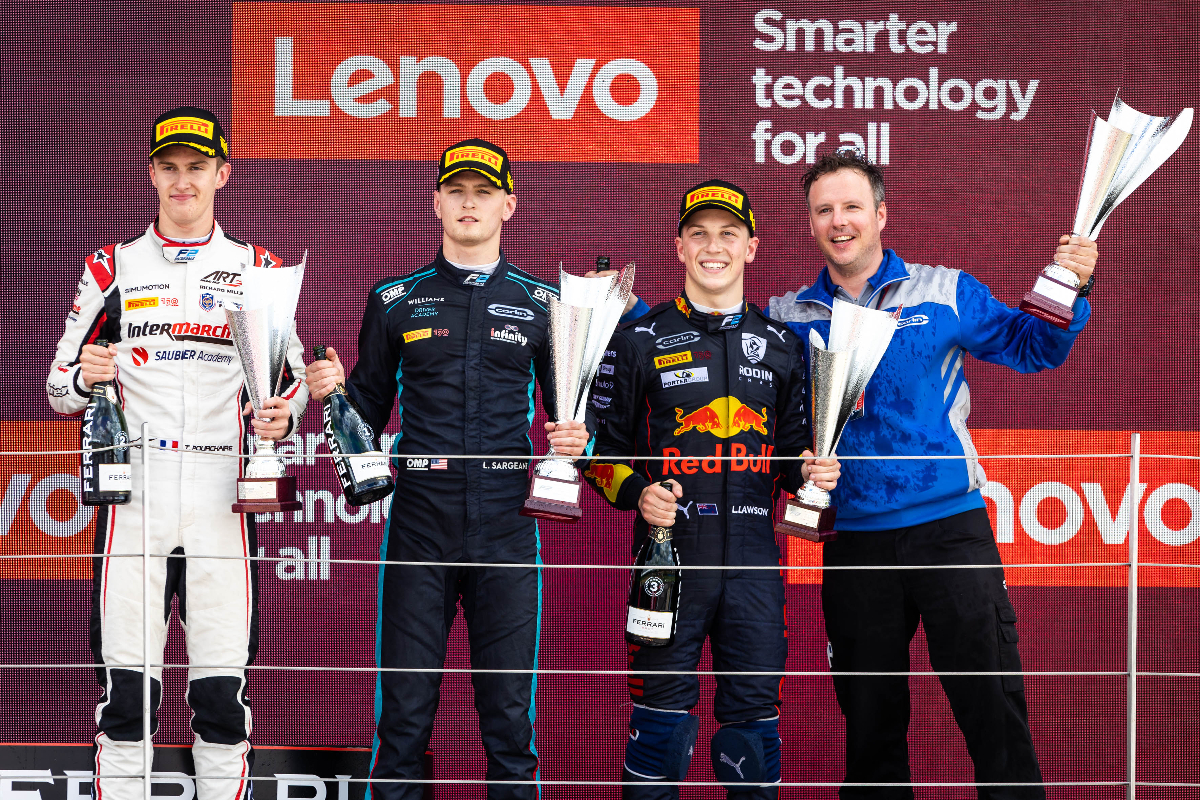 It was a breakthrough weekend on home soil in both F2 and F3, and its drivers in the higher category explained in the post-race press conference that the pace has always been there to fight at the front but the results did not match until Silverstone.

“[This is] what the team is aiming for. It proves they gave us an amazing car this weekend,” said Sargeant.

“The pace to win, pole position. I feel like we both have been extremely quick all year, just hasn’t quite come together we’ve been at the front at the same time. Obviously, it’s awesome to share a podium with my team-mate.”

Lawson added: “When you look at the standings and the way it looks at the moment, it doesn’t show the true pace of where we’ve been this year. The team has done a really, really good job, and we’ve basically had a rapid car every weekend. So, it’s nice to show it this weekend and put both cars on the podium.”

In evaluation, Lawson thinks “considering the speed that the car has had, I think we should be further up [the points]” already.

An analysis of where Carlin truly stands on qualifying and race pace in F2 can be found on Formula Scout later this week.

Jack Doohan and Ayumu Iwasa had to work hard in their fight for victory in F2’s sprint race, although very little of the tactics they were applying were actually used in wheel-to-wheel combat.

The race began on a wet track that was drying, and its was all about tyre management in making it to the end with enough pace in hand to still fight for big points. 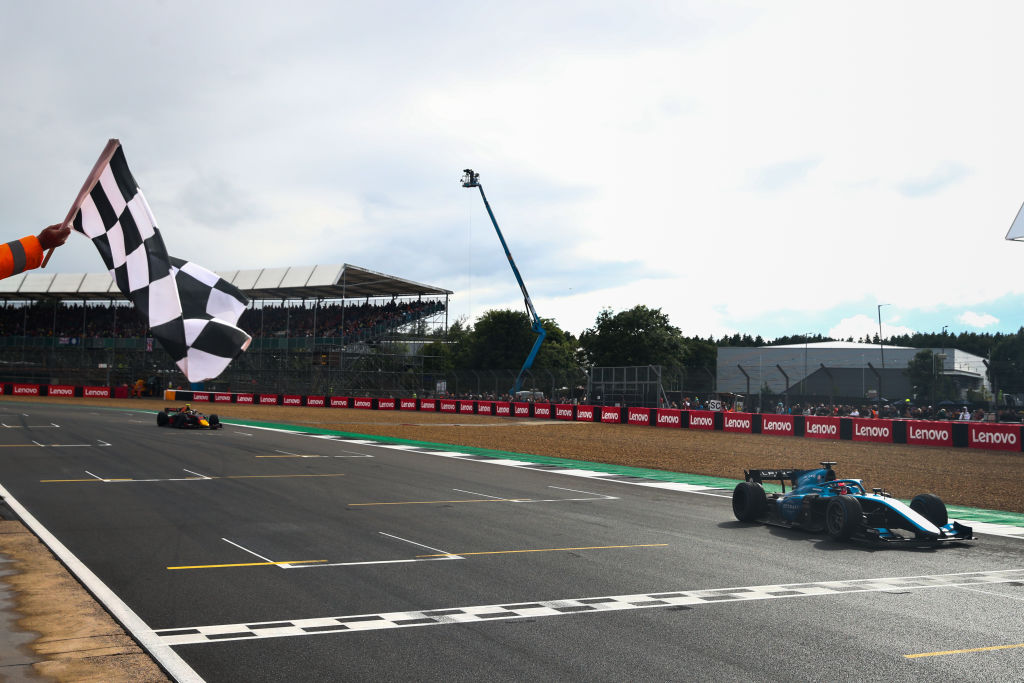 “I was really trying to not stress the rear, trying to keep the rear as calm as possible, short shifting, doing the gears higher than we were in dry conditions just to try and keep the rpm load as low as possible in the rear. It was just a constant fight to try and find where the water was.

“Everyone is going to the inside on the first few laps to get the spray up, and then at kind of half race distance you have to move to the dry line again because no one’s been driving there, so you’re constantly trying to find the correct line, but in the end, I’m just really happy that we held on.”

Iwasa made similar remarks to Doohan, while third-placed Enzo Fittipaldi struggled more with the tyre management.

“I think we maximised the result we had today because Jack and Ayumu were honestly really quick,” he said in the press conference. “We couldn’t keep up with those two. I’m just really happy with the P3. I think we came home with a good result. Very good points for the championship. I think we were able to maximise the whole race.

“Considering the start, we had a good pace. I think we were just too quick in the beginning, me particularly because I was able to get past Jehan and then the tyre just fell away and it was about managing from the middle to the end. I think we had a different approach and their approach ended up working out well for them and I’m still happy with the result today.